Tech tip: Clearing the air for your bike's intake

Tech tip: Clearing the air for your bike's intakeThis is from the “don’t do as I do, do as I say” department. I could have sworn I changed the...

This is from the “don’t do as I do, do as I say” department.

I could have sworn I changed the paper element air filter in my 883R Sportster no more than one—maybe two—riding seasons ago.  So when I picked up a new filter element for it recently, there was no sense of urgency to put it in, but I finally got around to it on a rainy day.

Turns out, I was mistaken about when I changed it last.  It was—well, let’s just say it was longer ago than I had thought.

As a result, what I found inside the air cleaner box when I opened it up was not good.  The old filter was a dingy gray-brown, and dead bugs, bits of leaves, hay and other foreign matter was stuck to the filter and laying in the air box.  I don’t recall it looking this bad before, but there you have it.  I’ve included a side-by-side comparative image of the old and new filter elements for your viewing pleasure.

On the bright side, the filter was doing its job—it was intact and the areas inside the filter were clean, so none of the potentially damaging crud had been sucked into the intake.  On the other hand, the engine could not have been breathing as well as it should have for a while.

So, I thought I’d take advantage of this unfortunate set of circumstances to share a couple of tips on the subject of proper maintenance of the air filtration system on your bike.   This is where the “don’t do as I do, do as I say” bit comes in. 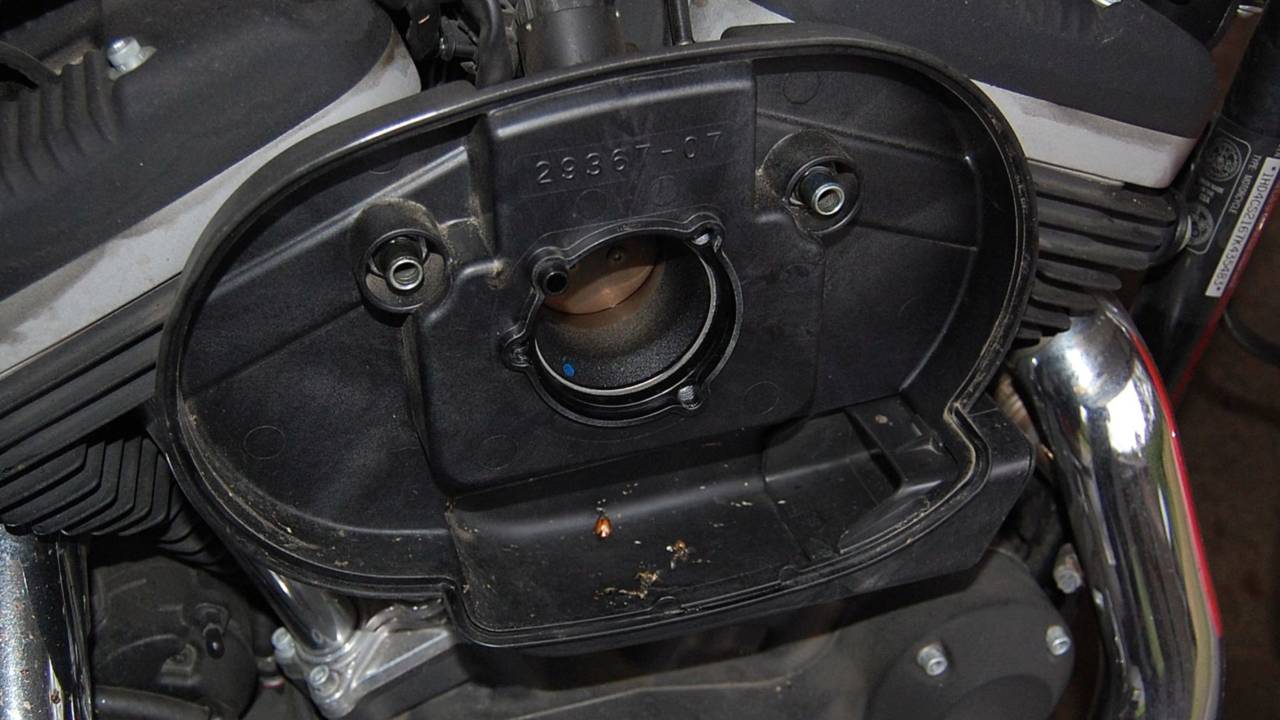 Point one—stick with the clean/replace schedule in your bike’s owner’s manual.  If you have cleanable, rechargeable filter elements, stick with the schedule for those, as well.  The dustier and nastier your riding environment, the more often you should give the filter a look and clean/replace it as the case may be.

Each bike seems to have a totally different air filtration system, including the air box, element type, fasteners, removal process and so on.  As a result, this is merely one example but it is more or less typical in terms of the general steps involved.  If nothing else, a Sportster is easy to work on because the ham can element box is right out there on the side of the bike.

Other bikes have the air filter element in an air box that is buried in such a way that checking and replacing the filter becomes something of a project.  Take my Honda V30 Magna, for example.  The air box is up under the gas tank, so accessing the air filter requires the bike’s gas tank to be unbolted at the front then tipped up and propped up (with a little prop rod that is provided in the tool kit) and the end of the air box removed, so the paper element can be removed.  It’s not open heart surgery, but it seems to me there could have been an easier way. 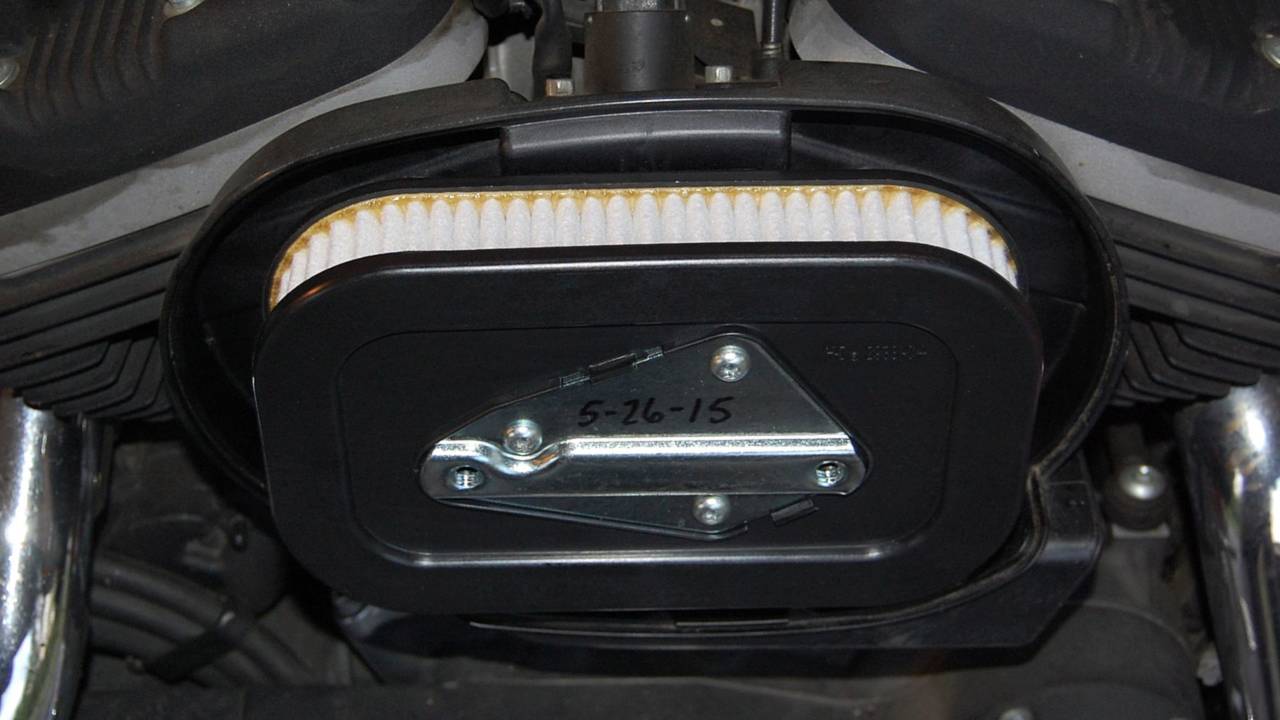 The Sportster in this instance has its own little wrinkle to brighten my day: the outer cover bolts require Allen wrenches to remove, and the inner bolts that secure the filter element itself are star drive outfits.  Why they couldn’t be the same type of fasteners is anybody’s guess, but it would have made sense in my estimation.  And, they are all original equipment, so the bike rolled off the assembly line that way. 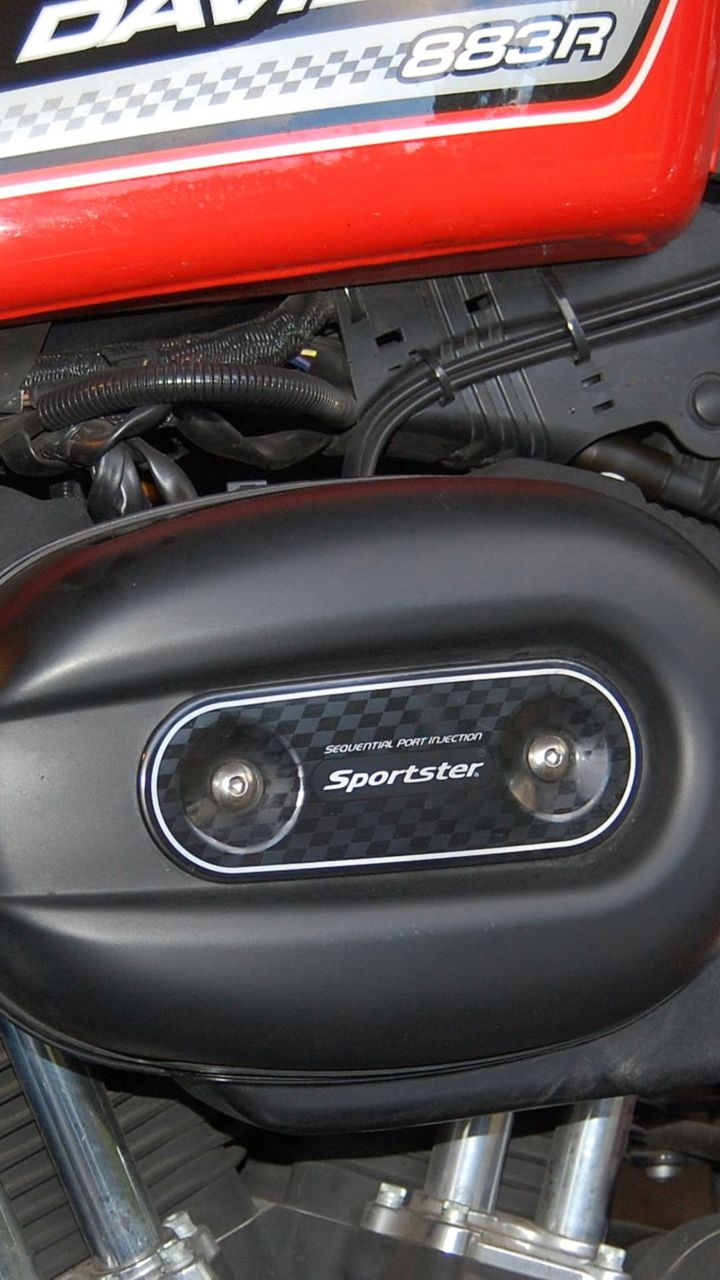 Once the old filter is out, give the air box a look to check for cracks that could allow unfiltered air to get in.  Clean it up as needed, and check any rubber or other type of gaskets for cracks, leaks and grit that may be in the seams.  Clean up the inner and outer areas to assure they are free of all debris and grit, then place the new filter element and reassemble.  For those systems that use bolts or screws to hold things in place, use of a drop of thread locker is a good way to keep things from vibrating loose later.  Using high-strength compound isn’t necessary for this application.

MUST READ:  Driver Runs into Motorcyclist, After He's Told to Stop Texting | RideApart

By: Gary Ilminen
++
Got a tip for us? Email: tips@rideapart.com