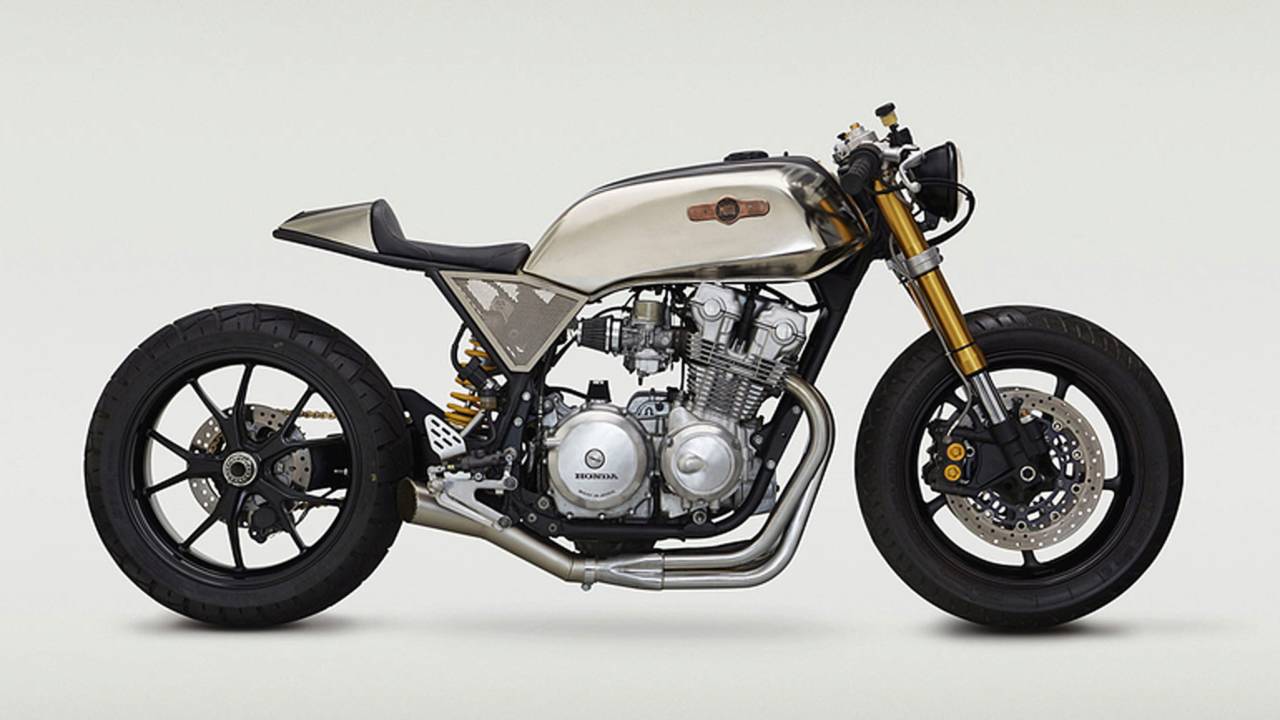 This weeks' Bike-uriosities include a custom cafe racer, a parts bin Japanese touring bike, and a century-old three-wheeler from Down Under.

At Bike-urious, we’re spending all of our time finding the most interesting motorcycles that are currently for sale for you to drool over (and maybe empty your wallet for). Here’s our favorite finds from the last few days!

Richmond, VA-based Classified Moto began its journey back in 2011 when co-founder John Ryland was laid off from an advertising gig he'd been working for more than a decade. John and his wife Betsy grew the company and in 2013 they moved out of their residential garage into an industrial shop as several other members would join their ranks. They describe their bikes as "a Frankenstein combo of old and modern components that hopefully add up to something fun and unique," and I'd have to say that's a pretty accurate self-assessment, especially when talking about the example of theirs that's currently for sale.

The sea of cafe racers built in recent years has made seeing a truly noteworthy example increasingly rare, but this bike from Classified Moto, called the "Superstrada", is a top shelf example of what the majority of cafe builds strive to be. It's clean and minimalistic while still boasting high-quality craftsmanship and an overall readily-noticeable, professionally-built appearance. This build was only possible because a spare no expense approach was taken, but it appears to have paid off as this one-off CB is genuinely something special. The folks over at BikeEXIF apparently agree, as they crowned the Superstrada their 2013 Bike of the Year.

The 1980 CB750F Superstrada project took over two-years to complete and gets its name from the fact it boasts a single sided swingarm off a Ducati Multistrada fitted with a rear wheel from a Ducati Hypermotard. Obviously the single sided swing arm necessitates a monoshock, which on its own is noticeably superior to the stock rear suspension on the '80 CB. The Superstrada also sports a front end – fork, front wheel and brake –  from a Yamaha R6, which seriously improves the machine's handling and performance capabilities. Interestingly the folks at CM opted for two different tires, with a Metzeler ME880 in front and a Dunlop D616 in back. Hopefully they warm up at the same rate and have similar traction!

The Superstrada's tank is stock '80 CB750F, but it has been nickel-plated along with the tail section before receiving its custom tank-badges and then being painted with a black racing stripe. A handmade, one-off, metal meshed side cover in lieu of the stock side cover is an awesome touch that helps to distinguish its build-quality and meticulous attention to detail. The Strada also has a 4-into-1 Vance & Hines exhaust that features a custom one-off silencer. Custom mounts were made to accommodate R6 rearsets, a premium Acewell digital display handles instrumentation duties, and the custom upholstered leather seat was done by Roy Baird of Richmond, VA.

Classified Moto has different tiers to differentiate their levels of build, with level 1 being their most basic and level 5 being their best and most expensive. Before the Superstrada was built, level 4 was the pinnacle of their offerings. This example introduced CM's money-is-no-concern level 5 which starts at $40,000 and up, making the Superstrada a steal relative to Classified Moto's prices and other offerings. With that said, no one would be unjustified in thinking a level 5 build would at least lose the plastic reservoirs but, alas, they did not.

For more info on the Superstrada you can check out its page here on CM's website. You can find this beautiful professionally-built one-off 1980 CB750F cafe racer with modern suspension from Classified Moto for sale here on Craigslist in Miami, Florida with a price of $18,999.

This bike-uriousity brought to you by Tim H!

Normally when you hear the name Chris Carr in the world of motorcycling, you think of the legendary AMA Flat Track racer. You know, the guy who was Rookie of the Year, AMA Pro Athlete of the Year, and a seven-time National Champion? His exploits even earned him a spot in the AMA Motorcycle Hall of Fame. In 2006, he gained another title – fastest motorcycle rider in the world (and first to crack the 350 mph threshold) thanks to a 354 mph run in the BUB Enterprises streamliner at the Bonneville Salt Flats. So when I saw that this was a Chris Carr design, I was very intrigued to see what he was like as a designer. Well, turns out it's a different guy, so don't get as excited as I did.

Still, this is an interesting Superhawk that's been turned into a custom cafe racer. Highlights of the work include Excel wheels with Buchanan stainless steel spokes, a custom frame, lengthened chromoly swingarm, misc Honda parts like a CL160 headlight, a rebuilt CB77 speedometer, and a CL350 front end. Other work includes a 6" stretched custom tank from a CB125SS, custom tail, rebuilt carb, custom center stand, and more. As a show piece, the speedo cable and headlight were not hooked up to keep the front end clean. The seller has put just 20 miles on it since the work was done, and he/she says there are no issues. For more information on the builder, head on over to chriscarrdesign.com.

Find this custom Superhawk for sale for $6,000 here on VFT (you'll have to scroll down a bit to June 28th).

In Honda's long and storied history, the CB1100R is one of my favorites (and it's a bike that I wish Honda would use the current CB1100 to bring back). The reason why I like it so much is because it was Honda's first homologation special, built so that Big Red could go endurance racing. The CB-R was offered between '81 and '83. The '82 models had an internal designation of RC, and just 1,500 examples were built.

The CB11R was an evolution of the CB900F. The engine from the CB900 was bored out, bumping displacement up to 1062cc, and the new motor produced 115 horsepower at 9,000 rpm. Honda immediately started winning with it, commencing with a victory at the '81 New Zealand Castrol Six Hour. It was big and it was heavy, but it was damn fast. Despite the 518 pound weight, the new one-piece frame combined with Honda's first use of twin-piston calipers and nitrogen-charged piggyback shocks in a production bike made this bike successful on race tracks that favored fast sweepers over tight hairpins. Top speed was 149 miles per hour, making it the fastest bike of its time. For more on what makes this CB special, check out this "Memorable Motorcycle" story from Motorcycle USA.

This example (VIN: SC082001247) has 37,090 miles and is said to be 'nicely preserved.' The seller verified that everything works, and notes that it has a few period-correct modifications like the Cowley 4-into-1 exhaust. When the bike was initially imported it did not have proper paperwork, but the seller says it has since been officially imported and he has copies of the original UK paperwork.

The seller also includes a video so you can hear it idle and rev a few times.

In 1980, Honda updated the naked Gold Wing and called it the GL1100. That year, they also changed what the Wing would be about forever by creating a full dress touring variant called the Interstate. With the Interstate you got a full fairing, saddlebags, and a removable trunk right off the dealer floor. Other manufacturers immediately jumped on the bandwagon. Eventually Suzuki developed the Cavalcade to compete with the Wing, but it took them a few years to do so. Their stop gap idea was to take the excellent GS1100 and slap the fairing, trunk, and saddlebags on.

The GS motor was used in a variety of models, but in this application the engine was tuned for more torque. The 1,074cc inline four cylinder put out 92 horsepower and 64 pound-feet, which were adequate numbers considering that the bike's weight ballooned to 639 pounds with all the bolt ons. In a 1982 review, Motorcyclist said that the modifications made the bike worse, and it was a bit of a disappointment considering how much they loved the standard GS1100G.

"...we were disappointed by the lack of attention to detail - things like no vents in the fairing, no means of keeping the engine heat from the rider, no balance hose on the shocks, the trunk hinges that gouge helmets, etc. These detail oversights and omissions may have helped Suzuki keep the GK's price $450 below the Honda 1100 Interstate's, but we suspect many buyers would be happy to come up with the added money to get the extra features and quality."

It wasn't a fair comparison for the GK, as the Gold Wing had been built with all the fixin's in mind rather than as a parts bin stopgap bike, and It wasn't until Suzuki released the Cavalcade that they had a real shot to compete. Regardless, if you pick this up, you better bookmark The GS Resources - it's the best site for these bikes.

This example has 31,000 miles and is said to need nothing. It got a recent service with a carb cleaning, valve adjustment, and a tune up. New tires have also been installed. Would a Kawasaki Concours be a better vintage tourer for the money? Yeah, probably, but this is much rarer and cooler.

Find this GK for sale here on Craigslist for $2,295 in Whitinsville, Massachusetts.

After a 100+ year slumber, this De Dion Bouton is ready to hit the street again...almost. It still needs a little bit of work but it's a running, riding trike with patina that's just about as old as it gets.

As the 1900s approached, there were big questions about how transportation would be powered going forward. De Dion Bouton started with steam in the early 1880s, but their first prototype car caught on fire and burnt itself to the ground. By 1889, DDB felt that internal combustion was the way to go. Hindsight obviously reveals that they guessed correctly, and they were rewarded with a few years of being the world's largest automobile manufacturer.

Apparently this example suffered a broken gear tooth before 1910, and the bike was put into storage. Fast forward over 100 years to 2016, when the tooth was fixed and the engine was refreshed where necessary. It's now said to be a runner but only 2nd gear works at the moment, you'll need to source or make a gear linkage assembly to access 1st. The seller also has access to a rear carriage chair that you could acquire in a couple of months.

Find this rare trike for sale in Gouldburn, NSW, Australia with an unmet opening bid of $99,500 here on eBay.

What would you put in your garage?