The Early History of Husqvarna Motorcycles 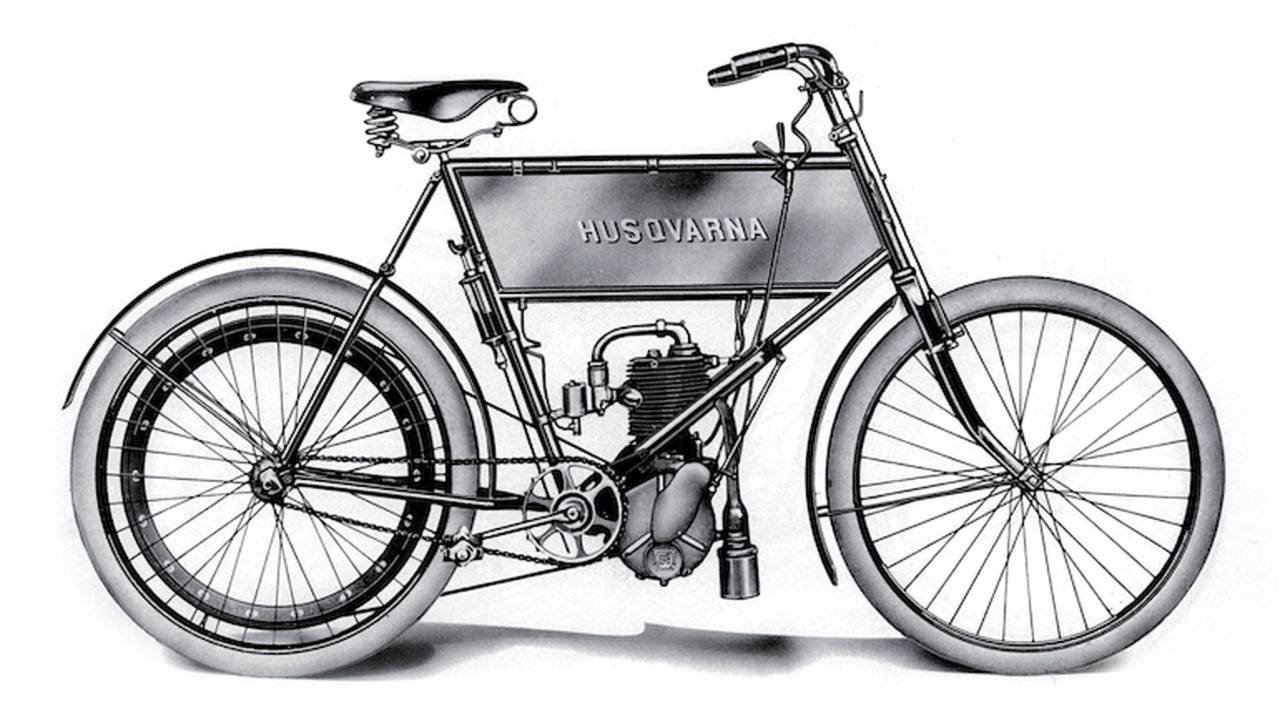 Husqvarna has a long and varied history both in and out of the motorcycle business. Founded in Sweden in 1689, the company started out making rifles and military hardware. By the late 1800s, the company's production roster included sewing machines, stoves, and household appliances. Motorcycle manufacturing began in 1903 with a single-cylinder model, and over the next few years increased to four different production bikes.

The original factory was situated next to the Huskvarna river – meaning "House Mill"– in the town of the same name. Engineers tested several foreign-produced drive trains before choosing a Belgian-made FN (Fabrique Nationale) engine to mount in a homemade bicycle. The 225cc single-cylinder engine produce 1.25 horsepower, which provided a manageable speed of 25-30 mph with belt drive. According to the owner’s manual:

"There are no obstacles in learning how to operate this engine-velocipide. Nor does it take any technical knowledge for the purpose. However, you do have to take care of this machine carefully and see to the fact that it functions impeccably. If not, this vehicle will not perform to the satisfaction of the owner. If the petrol is too cold, you can warm up the carburetor by holding a burning newspaper or other sheet underneath it. Do not under any circumstances use a welding torch to heat it!"

This first machine was manufactured on a small scale between 1903 and 1906. The initial price tag was set at 700 kronor, or about $150. The manual also stated that the company did not give any warranty on the FN-engine, but instead took full responsibility for the velocipide itself. In the last season, the original power source from the FN was increased to 2.75 horsepower.

There are no sales figures available from that era, but the records show that the "Motorvelociped" (later shortened to Moped) was used for both transportation and racing. In 1907 Husqvarna conducted a test using an NSU engine which gave an output of 3 .25 horsepower, but the German engine was only used for two years.

The first manufacturing figures known are from 1908, when Husqvarna built and sold 14 motorcycles. The company also initiated an agreement with Motosacoche of Switzerland. The Geneva-based firm owned a factory with 300 employees in Genova, Italy, where both engines and motorcycles were manufactured. The Motosacoche power sources were then sold to more than a dozen different two-wheel producers all over Europe. The Swedish collaboration with the Swiss lasted for almost four years.

Husqvarna took a giant step towards making a recognizable motorcycle at the end of the century's first decade. Using the single-cylinder Motosacoche No. 58, the company built a very handsome, no-nonsense machine. All in all, 23 units were sold during 1909. Sales doubled in the coming year when a new collaboration was introduced, this time with another Swiss company by the name of Moto-Rève - the Motorcycle Dream. This new bike, the Model 65, had a 298cc engine that produced a whopping two horsepower. The main feature of the 1910 model wasn't the power however, it was the fancy new V-twin engine configuration.

During the company's first few years years – 1903-1910 – Husqvarna advanced steadily in engineering and production, but only sold about 100 motorcycles. Soon enough the market would be attracted by the new models from the next pioneering era for the Swedish marque - 1911 to 1920.