Preservation and Security: A Shed of One's Own 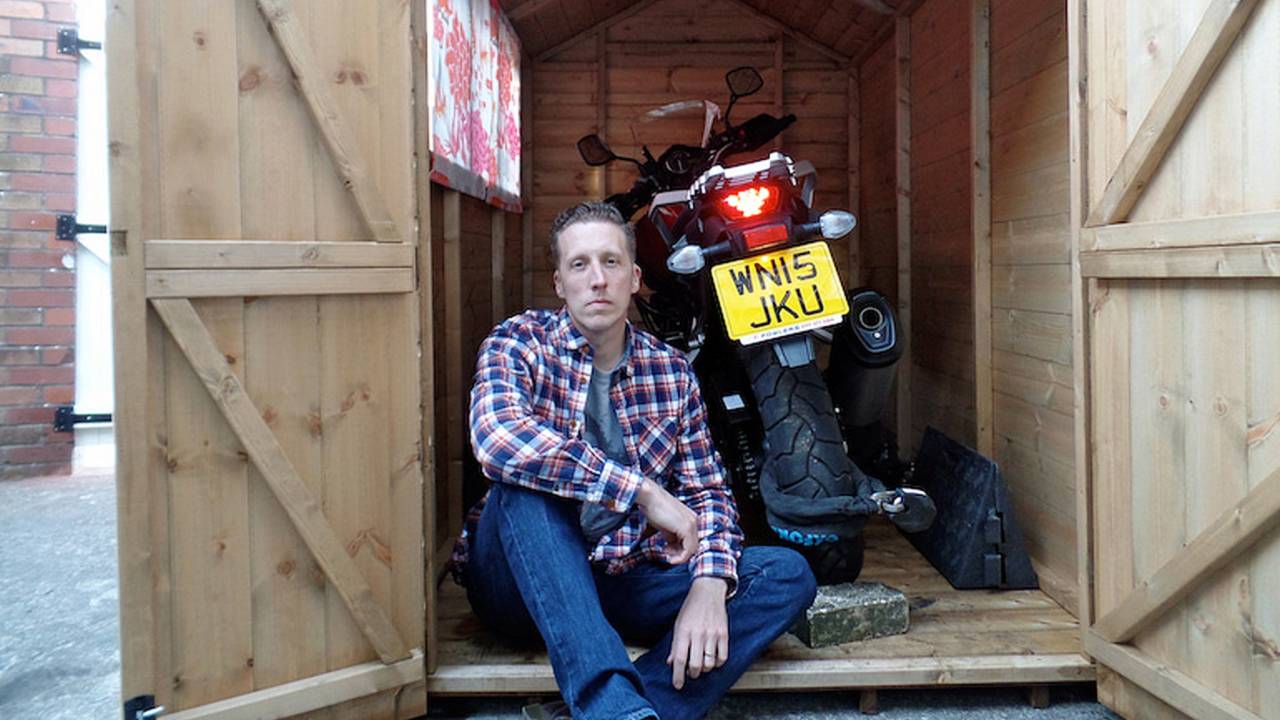 Preservation and Security: A Shed of One's OwnThe thing I love most is the smell of the chemicals. Twenty years from now, when doctors are...

The thing I love most is the smell of the chemicals. Twenty years from now, when doctors are microwaving my innards in an effort to fight the cancer caused by said chemicals I may not wax so romantic. But right now, it's an aroma that fills me with... I don't know... solace?

The chemical smell is to be found in the large wooden shed where I house my motorcycle. It's an aroma created by myriad items designed to fight against the interminable wetness of Britain's climate: petroleum-smelling Creocote for the wood, the oily tang of ACF-50 on the bike, NikWax and Fabrisil for my gear, GT-85, MucOff chain cleaner, Motorex, and on.

The smell punches you in the face when you first open the shed doors. You have to wait a second to let fresh air circulate. When it does, you can also smell the lingering scent of pine. I love it in there—it's like a tree fort.

MUST READ:  How To: Prevent Motorcycle Theft | RideApart

My Suzuki V-Strom 1000 is pretty new; it has only 2,000 miles on it and still 20 months under warranty. There isn't really any work to do on it but clean and check the chain. I manufacture reasons to go into the shed, anyway. To sit there, next to my bike, feeling this deep sense of something I can't find the words for.

Thomas Jefferson doctored Lockean philosophy when he wrote in the Declaration of Independence that all men are endowed by their creator a right to life, liberty, and the pursuit of happiness. John Locke's phrase was "life, liberty and property." Within my little shed, I guess I have all those things.

MUST READ:  Watch Rider Take out a Motorcycle Thief As he Tries to Flee | RideApart

The shed is my answer to the question I conveniently avoid when evangelising about motorcycles. When I'm trying to convince friends and coworkers to start riding, I tell them about the sense of freedom, independence, adventure and community; I tell them about the far-reaching physical and emotional benefits. But I never broach the subject of where the heck this amazing two-wheeled wonder machine is supposed to go.

Obviously, the best place for a motorcycle is in a garage. All nice and cozy, next to your riding mower, workbench-mounted pillar drill press, and the oil-cloth covered '63 Mustang you keep meaning to fix up. But not all of us have that set-up.

I live in Not America, in a house that is 130 years old. There are no two-car garages on my street, in part because when the houses were built there were no cars. The situation is common across the whole of Not America, but even within the God-blessed USA there are plenty of people who have to live a garage-free life. People in apartments and condos, for example, or those in the Southwest and South where covered carports often take the place of full garages.

Digressing slightly, the above reality is, I think, the biggest challenge to electric motorcycles entering the mainstream. But even for those of us running internal combustion engines, it's a situation that creates big challenges in determining how best to protect our bikes from the acts of God and gypsies.

RideApart's done a few articles offering ideas on how to prevent motorcycle theft, but protection against the wind and rain has been largely overlooked. Perhaps that's because there aren't any great answers apart from the obvious ones.

For my part, I'm fortunate enough to have a little courtyard space that is walled off from the rest of the world but accessible from the street. Before the shed and the Suzuki, I had a Honda that I would ride into the courtyard, wrap heavy with chains and keep under a sort of tent thing that I bought on eBay.

The tent thing claimed to be waterproof. But like every claim made on eBay that was a lie. So, my system became one of using a "waterproof" bike cover as well as the tent thing. Eventually, it became a system of using a cover, the tent thing, and an industrial blue tarp. Putting my bike away after a ride took 45 minutes and even then it didn't work particularly well.

During The Long Dark (October to May), when nothing ever dries in Britain, if I let the bike sit like that for a week I would find the brake discs covered in rust. It was a situation that kept me awake at night. I remember once lying in bed at 3 a.m. thinking: "I can feel my bike rusting. It is rusting right now."

Not to mention it was an eyesore. My wife hated having a large blue-tarped thing in the courtyard. It looked a little too white trash.

As part of my pre-ride checks I always make sure the motorcycle still has wheels.

When I got the V-Strom I decided a better solution was needed. I spent a stupid amount of money buying a shed that took my wife and I two days to put together. We covered every inch of it in Creocote and she made little curtains for the windows. She delights in the fact the fabric she chose is so childlike.

"It's your little playhouse," she says.

I don't mind. Either way, I've got now this place where I know the bike is protected from the elements. I still wrap it in chains, but I have, too, the peace of mind that comes from a locking door. But also there is the fact that I have a space in which to work on the bike, and more importantly, a space that is mine.

Virginia Woolf famously said that for a woman to have a room of her own was the first step toward developing the freedom to be a writer. I'm not a woman and I'm not sure what comes of having a shed of one's own, but it's something that brings a deep sense of content. In one way, I suppose it is an extension of the benefits of motorcycling: life, liberty, property, and the pursuit of happiness.

It's strange how freedom manifests in so many forms. I'm fortunate that I can find a piece of it in a little wooden building that smells of gasoline.