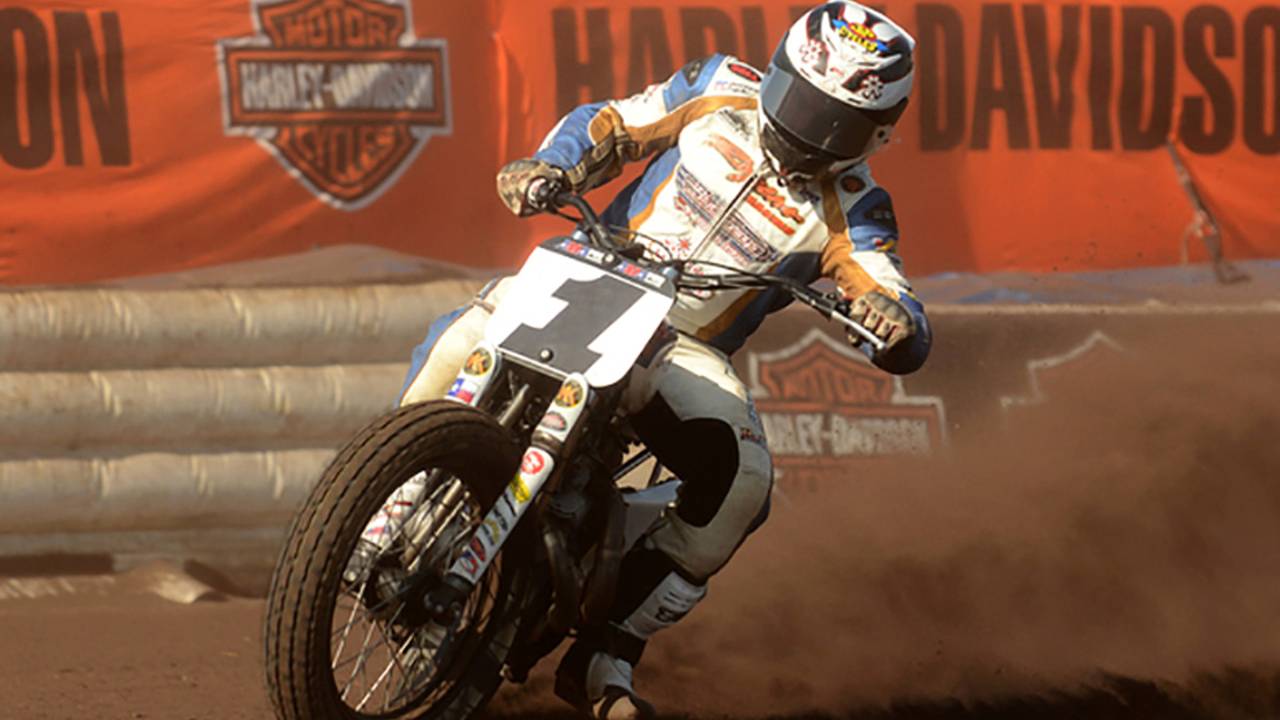 As Americans, racing is in our DNA. The desire to pilot a vehicle at unruly speeds against other humans is a test between man/woman and machine. But before legendary racetracks like Daytona, Talladega, The Circuit of the Americas, Laguna Seca and Indy cemented themselves in our cultural tapestry, it was the dirt ovals found in small pockets of America that gave rise to our fascination of motorsports.

The AMA ran its first race in 1932 with the Class A Dirt Track championship, which was designed for manufacturers to race prototype bikes.

Today, AMA Pro Flat Track has been a commonly overlooked race series. Despite its action, rivalries, crazy racing and crazier crashes, it's still not considered a household name in the American motorsports landscape.
READ MORE: Take a POV Ride At a Vintage AMA SuperBike Race at Laguna Seca | RideApart

Despite the sport's early 1920's birth, there are many things you may not know about America's original extreme sport.

A typical AMA flat tracker is capable of speeds exceeding 130 mph and are set up to lean hard. Rider footpegs are non-symmetrical—the left peg is slightly higher and moved rearward where the right is in a more standard position. Wide handlebars enable racers maximum control with better leverage, along with better balance when cornering.

Battle of the Sexes

Men and women compete side-by-side. Everyone is the same when they don a helmet, leathers, boots and gloves.

No Brakes, No Problems

Brakes? Where we're going we don't need brakes. Well…some bikes are equipped with a rear brake, but they're rarely used in a race. If you thought throttle control was important in road racing, it's even more important in flat track racing. It's on the gas as early as possible and off the gas as late as possible. It's also all about setting up for the corner, followed by a lot of technique to get the bike around said corner.

Not All Tracks Are Created Equal

Every track is different, which takes intensely different riding styles. A track's dirt is often unique—from the fast hard-packed clay tracks to loose dirt with a cushion bottom and looser top layer. They also range in size, typically ½-mile to 1-mile in length.

According to Brian Bartlow, a road racing and dirt track instructor with FeelLikeAProDirt.com, short track and mile tracks have totally different riding styles. A hard packed, mile track often takes a different riding style that resembles more of a road racing body lean, as there's more grip than on a dirt short track. A dirt track often requires body control that's opposite of a road race bike—leaning away from the motorcycle, causing it to turn and slide in the corners.

Not only is every track different, but every lap on a particular track is also different. As the dirt changes from day to night, lap to lap, it often takes a rider with a lot of concentration and experience to handle an ever changing track. Racers must be adaptable and expect  surface variances that alter corner entries and lap times by hundredths of a second.

Flat track motorcycles are the original progenitors of drifting. We all love to see cars drift in corners, but motorcycles did it first. To gain additional stability and protection when drifting, racers will lay their inside foot onto the ground while sliding through a corner. This props them up and gives them a sense of lean angle. In order to keep their boot and foot intact, professionals run a steel sole that's strapped to the outside of the boot.

You Don't Need a Driver's License

Well, you need a license through AMA, but you need only be old enough to drive to compete with the big boys. At the moment, Jarod Vanderkooi is the youngest professional at the age of 17. Last year, 2014, in his first flat track appearance he won the prestigious Springfield Mile in the GNC2 class. When I was 16 I was driving my parent's minivan, not winning races on mile tracks. If you attend local tracks, you'll often see kids racing bikes where they can't put both feet on the ground.

Imagine watching the Indy MotoGP with a concrete jump in the middle of the front straight. Of course, only a small few TTs are featured in the AMA Pro Flat Track season, but they're epic. The TT races are unlike anything else in motorcycle racing: It's motocross with flat track corners on flat track bikes. Riders must set themselves up for a corner mid-air. Watch the video that showcases a great save by Brad "The Bullet" Baker.

READ MORE: 5 Reasons You Must Attend The Peoria TT | RideApart

Nope, this isn't a photoshop series, those are all different bikes mid race. Photo by Jen Tekawitha

Not Just NASCAR or MotoGP

Even though AMA Pro Flat Track racing isn't a household name, you can still gather around the TV like you do a MotoGP or NASCAR race. Today anyone interested in watching or viewing an AMA Pro Flat Track races can do so for free with a computer or tablet at FansChoice.TV. Bookmark that page now.