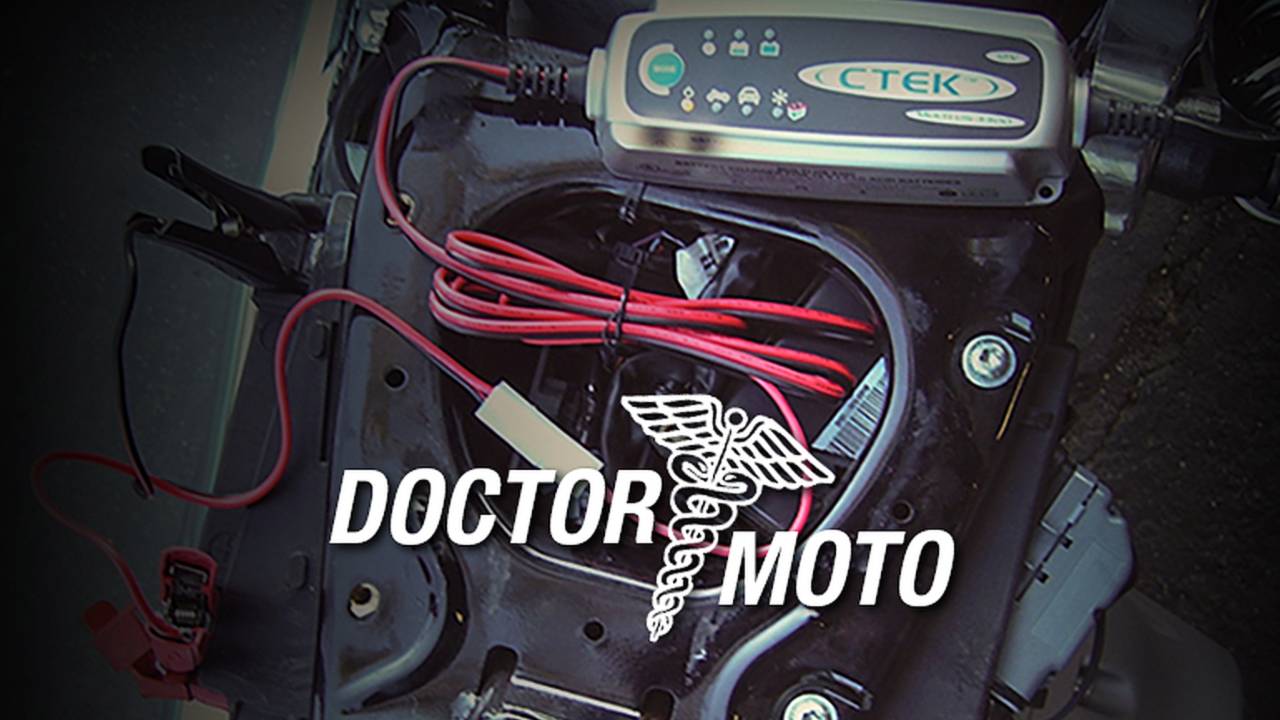 Doctor Moto says, "Save money, save hassles, save your battery!"

Motorcycle batteries are expected to withstand heavy vibrations, extreme temperatures and long storage periods. Yet, they typically get ignored until there's a problem and many “die” before they should as a result.

How long a battery lasts depends on the way it’s used, charged, and maintained. Deep discharges, rapid- or over-charging, high temperatures, failure to refill water (if required), and allowing the battery to discharge while stored all shorten its life. If you hate to constantly buy new batteries, read on!

Tech Tip – Battery Sulfation and How to Prevent It

Gel batteries contain “jellied” electrolyte that doesn’t require adding water. The gel also doesn't splash out of the caps easily when hitting bumps or tipping over, making them popular among motorcyclists. Gels are also more tolerant of being left partially discharged, don’t self-discharge fast, but cost more than conventional batteries.

AGM batteries' electrolyte is in a silica-glass matting wrapped around the plates. This makes them most resistant to vibration and also maintenance-free. They can even be used laying on their side. AGM batteries (sometimes called “dry” cells) are pricier than wet cells, but have higher efficiency and power than other types and often last much longer, especially in high-vibration situations or where maintenance is overlooked.

The newest batteries on the scene are lithium cells, which are compact, weigh a fraction compared to lead batteries, and are maintenance free. They also self-discharge slowly and can sit for months. However, they don't work well in cold weather and cost several times as much as other types.

Discharging batteries below 50 percent of capacity shortens their life substantially. Recharge batteries at a rate not exceeding 20 percent of their ampere-hour (a-h) rating. For example, a 3-amp maximum charge rate for a 15 A-h battery. Trickle chargers are ok for recharging a battery that’s been discharged to put it back in service, but they don’t have separate bulk, absorption and float modes, which are needed to maintain a battery’s charge properly during storage. As a result, when trickle chargers are left on for long periods they will overcharge and damage batteries.

Since motorcycles are often left unused for extended periods, the best solution is a multi-stage “maintenance” charger that is designed for storage.

Lithium batteries don't require a maintenance charger, but you should disconnect the battery and use a charger recommended by the battery manufacturer.

Battery condition can be tested with either a resistive load test or electronically with a special tester that measures internal resistance. A simple digital voltmeter and a hydrometer can also provide useful information on charge. A fully charged battery at rest should read 12.6 to 12.7 volts, with a specific gravity (SG) of 1.265. A 75 percent charge yields 12.4 Volts and 1.225 SG; 12.2 Volts and 1.155 SG indicate a 50 percent charge, and 11.7 Volts or 1.120 SG means completely discharged. Large differences in SG between cells indicate a worn-out battery.

Modern bikes have devices such as radio memories, clocks, immobilizers, alarms, and computers that draw battery power even when the ignition switch is off. Together, these can drain a battery in a relatively short time. To keep these draws from killing your battery, disconnect the negative (ground) battery cable. However, even without a load on them, batteries self-discharge a small amount each day. If batteries are left discharged, they soon become sulfated and lose capacity, and may lose their ability to be recharged. Therefore, always charge a battery as soon after it is discharged as possible, and never leave a battery in a low state of charge.

Fully charged batteries are quite resistant to freezing and can survive temperatures well below zero degrees Fahrenheit. However, when discharged they can freeze at just a few degrees below the 32-degree Fahrenheit (0 Celsius) freezing point of water. That’s another reason why it's important to keep batteries fully charged.

As a rule of thumb, when a motorcycle is in storage for about a month or longer, keep it on a special maintenance-type charger rather than on a regular trickle charger. Often, we don’t expect to leave the bike as long as we do, so make it a habit to connect it when parked in the garage. Many chargers come with external quick-connect plugs that only take seconds to use.

When used and maintained properly, batteries can last many years. However, neglect your battery until the bike won’t start and you’ll soon find out how much they cost to replace.