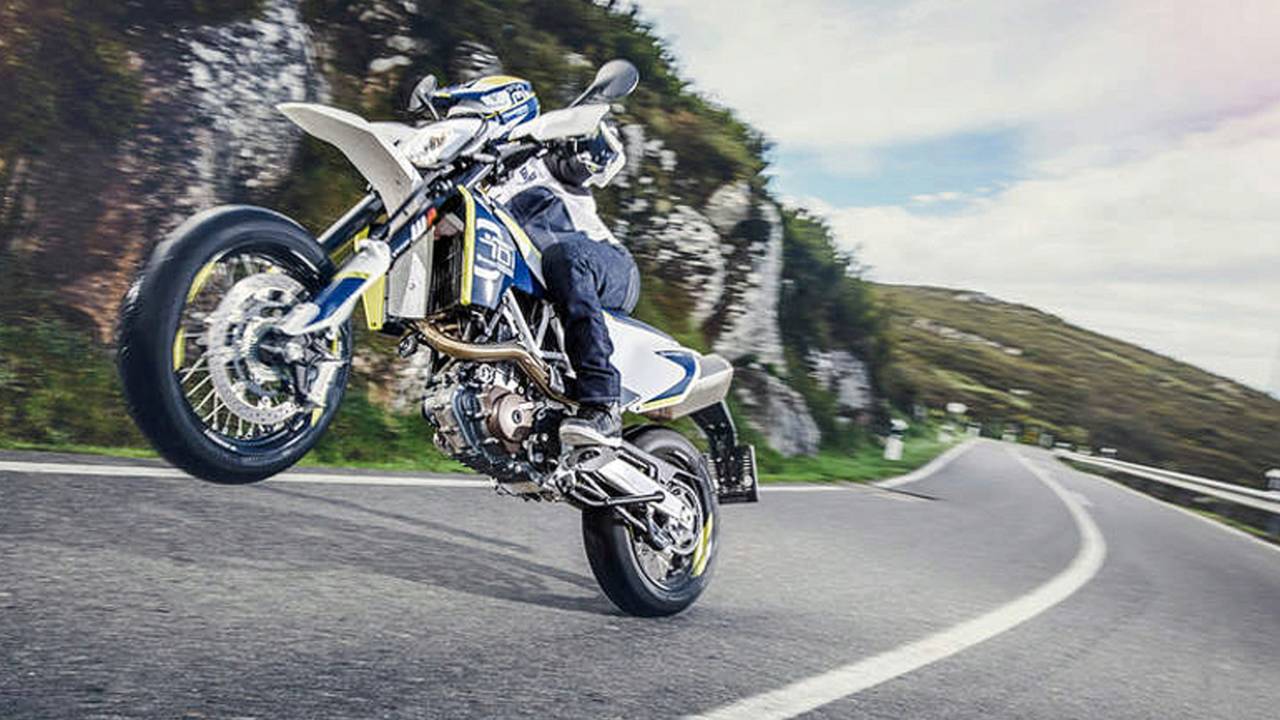 A reader hits us with the eternal question: buy a Suzuki DR-Z400SM, or get crazy with a Husky 701?

I wanted to get your staff's opinion on two bike choices that I'm considering for my first bike. I have ridden a small amount before and have completed my MSF course. I'm 6 feet 4inches tall and about 260 lbs. I will be doing light commuting (18 miles) and mostly fun riding in curvy parts of Texas. I'm considering the Husky 701 and DRZ400SM. I figure with the ride modes on the 701 I could grow into the bike but I wanted to know if that is realistic. With the DRZ400SM I figured it is a good starter, but I would want something more soon, so maybe starting with the 701 (which is what i would eventually want) is the best idea. Thoughts? I appreciate any feedback that your staff can offer and I love your site!

This is a great dilemma to have, Brandon. Not only have you narrowed your choices down to two very good motorcycles, but you clearly are thinking about this the right way. Any time you are looking to buy a new motorcycle, it’s a great idea to bounce your options off a few different people and take that info into consideration before making the final decision.

First of all, the Suzuki DRZ400 SM is an excellent motorcycle. I’ve ridden the dual-sport version of the DRZ many times and I have found them to be both reliable and capable of going just about anywhere. Plus, it gets great fuel economy with owners reporting around 50 mpg. I most recently rode the DRZ400 at SoCal Supermoto School and that reminded me just how amazing and multi-purpose these bikes can be. They are not too fast or too powerful, so they are a great first bike for anyone looking for a dual-sport or in your case, a supermoto. A new one will run you $7,200 but you can pick up a used version for under $5K all day.

The power is easy to manage, the clutch is bulletproof and the gearing is excellent for commuting or tackling curvy back roads. Out in Texas you have a lot of wide-open spaces between those curvy roads, though, so this is where the DRZ is going to shine. The engine, although a little soft on power, is incredibly smooth for a Single. You won’t get into the hand-numbing buzz that some of the other big thumpers produce until you have it pegged at or near redline. That said, the seat is very much a dirtbike style, so, it will bug you after long periods of time in the saddle.

Meanwhile, the Husqvarna 701 is basically a DRZ on steroids. I have only ridden a 701 one time and it wasn’t for very long, but that motorcycle is freaking awesome. And it should be with a $11,000 price tag! You can find them used for under $8K, too. It is considerably faster than the DRZ and it feels a bit bigger. It also feels quite a bit more modern because it’s a new design with a load of electronics (plus it has a slipper clutch), while the DRZ is low-tech and is going on 20 years old at this point.

The 701 is going to vibrate quite a bit more, but it is smoother than you’d expect from a 690cc big-bore single. Over the long haul, you will feel the vibes on the Husky much more than you will on the DR. On the flip side, you will have a bunch more power to get you rolling down the road at higher speeds, so it is a trade-off. It also gets just under 40mpg. The suspension on the DR-Z is pretty soft; you can adjust it to deal with some pretty aggressive riding, but it's nothing on the level of the WP-unit-equipped 701. They are two completely different means to the exact same end.

When it all comes down to it, out on the highway or when tackling twisty roads, the 701 is going to stomp a mudhole in the DR-Z. The Husqvarna is a much more advanced and purpose-built motorcycle, so, you will be making a jump right into the bigger, more powerful bike if you go this route. The DR-Z, by comparison, is mellow, friendly and easy to ride. So, if you were my offspring I would advise you to go with the Suzuki first and then – once you are done tipping it over in the parking lot, no longer stall it at intersections, and are sick of riding it – go get the Husky.

Since you’re not my kid (At least, not as far as we know. Ha! –Ed), and you appear to have done your research on the matter: Get the Husky. But be advised that this is not a true beginner bike. It’s much faster and likely a bit more fickle to ride than the Suzuki would be. On the flip side, you are right in thinking that you will grow into it (as long as you don’t destroy it or yourself first). So, heed this advice if you go with the bigger bike: take your time. Don’t go out and try to be the fast guy right away or you’ll end up on your head. If at all possible, take a few performance riding schools and learn how to haul ass on this bike in a controlled environment. If you can’t find one in your area then go ride it at a track day and just run in the C-Group or Beginner Group, so you have a chance to get it on without getting arrested.

Overall, either bike would be great. The conservative approach is to get a DR-Z and take it easy for a year or two while you learn the ropes. It costs less and will be easy to ride. On the aggressive side of things, it is always fun to go big. If you have a measure of self-control then you should be fine. Take your time and learn the nuances of the big bike before you start trying to set lap records between work and home.

I hope this helps and make sure to keep us posted on your decision and how it works out.

If you've got a question for the guys and gals at RideApart, drop us a line at info@rideapart.com