Della Crewe - Bikers You Should Know 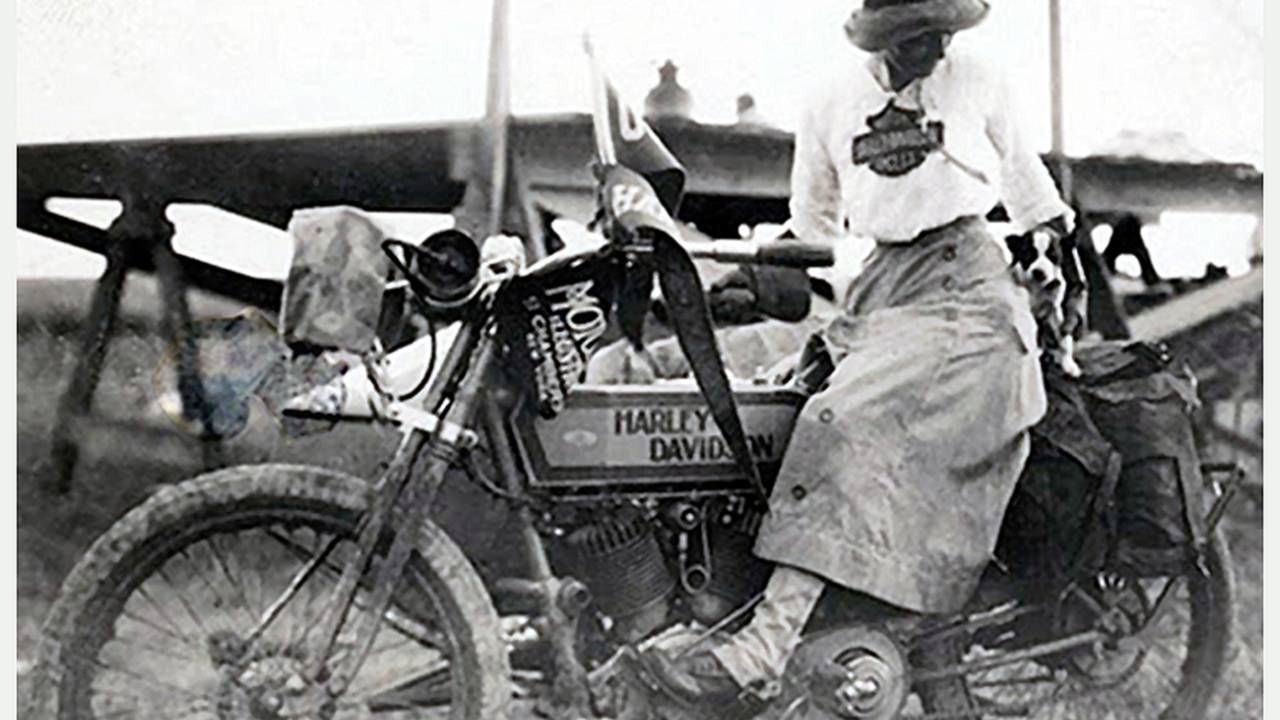 Learn the history of a true female motorcycling pioneer, who travelled throughout the United States on a Harley even before women had the right to vote.

In 1914, Della Crewe, 30, began the adventure of a lifetime with her dog – setting out from Waco, Texas, and to see the entire country. Six months later, she would reach New York City in the dead of winter and set off for a tour of the Caribbean islands, then Central America, all on a Harley-Davidson sidecar rig.

Della was not trying to become famous when she set out, but along the way her story "went viral," as we would say today, and was picked up by all sorts of news outlets.

The early days of the 20th century was a sexual revolution in its own way, with the industrial revolution allowing women to get jobs and the suffragettes fighting for the vote, and there are quite a few female bikers from that time to know by name. Augusta and Adeline Van Buren, society girls and relatives of the former president, rode coast to coast in 1916 trying to prove that women could be useful as messengers in the war. (Later, Augusta became a pilot and flew with Amelia Earhart.) Effie Hotchkiss, with her 52-year-old mother, Avis, went from New York to the San Francisco World's Fair in 1915, and back again, becoming the first women to go coast to coast on a motorcycle.

Della, however, stands out because she took to two wheels before those others and was the most prolific of them all, even though she never went coast to coast officially.

Just a Manicurist and Her Dog

Born in Racine, Wisconsin, Della was 29 years old and making her living in Waco as a manicurist when a young family member suggested she take up motorcycle riding as a way to see more of the local scenery she enjoyed so much. That fall, she had bought a new 1913 Harley-Davidson single-cylinder bike and took up riding around town. The next spring she traded it in for a twin, and had a sidecar bolted to it, in preparation for a months-long tour. Her friends in town presented her with a "Boston bull pup," which is what they called terriers back then, that she named "Trouble."

Della and Trouble soon left Waco headed for the big motorcycle races at Dodge City, Kansas, which Google tells me is now 525 miles away – 8.5-hour journey. But back then routes were not nearly so direct or well paved. It ended up being an eight-day journey for Della. She was greeted as a hero when she arrived, having fought her way there through muddy ruts and fields that claimed to be major roads. With that encouragement, she decided to press on.

Della's next stop was Milwaukee, where she visited Harley-Davidson headquarters and was treated to a picnic outing by the female employees. The roads between Kansas and Wisconsin were so bad at one point she had to detour through a farmer's field for several miles when she could not find a rideable road going the right direction. Along the way, she made it a point to stop and participate in any local fairs or parades she happened upon. She also wrote letters and took pictures, which were carried in a number of newspapers, as well as Motorcycle Illustrated Magazine and the Texaco Star Magazine, which Google has scanned and put online.

Della had family in Wisconsin, which she spent some time visiting, so it wasn't until autumn 1914 that she started across the northern states toward the East Coast. When she got to New York City it was 12 December and the temperature was -10F. In order to survive, she had to ride wearing every item of clothing she owned.

I know you are worried about the dog; Trouble had a specially made sweater to keep him warm, curled up on the floor of the sidecar. The local Harley-Davidson dealer, Texaco representatives, and newspaper reporters were all glad to see her make it to the city safely. You may notice what looks like a disc brake on the front wheel of her bike, but that's actually the drive for a Corbin speedometer/odometer. It had rolled over 5,400 miles by the time she hit the city.

Della Crewe wasn't done by a long shot, though, and this is where most accounts of her travels get hazy. But, roughly, as Della celebrated her achievement in New York, Europe was already engaged in World War I, which meant her plans to travel around the world no longer seemed possible. So, she booked passage to Florida instead. From Florida her next port of call was Havana, where she met with other local riders and toured all over the island. Then she hopped another boat and visited Panama and "America's master work," the recently opened Panama Canal.

Della next landed on the island of Jamaica, part of the British Empire at the time and still very much an unspoiled tropical paradise, where she motored to the top of the highest peak. Della's last stop on her Caribbean tour was an extended stay in Puerto Rico, or as she spelled it Porto Rico, where she again motored to all the big sites and the top of the tallest peaks.

For all of Della's travels outside of the country, she offered some of the greatest criticism for the state of the roads in Florida, upon landing at Tampa.

"Tampa: If you desire to test the quality and strength of your motor and gas and oil, to say nothing about human endurance, the western coast of Florida to the Georgia line will put all to the proof. Everywhere is an aspect of sterility heaps of sand populated with pines but scarcity of human habitations. President Miller of the Good Roads Association says Florida is going to have envied highways, but until then permit me to say let this wilderness alone."

She was happy to reach civilization again in Atlanta, and proceeded to visit the Carolinas, Washington, D.C., and Philadelphia before reaching New York City once again – racking up 10,778 miles.

According to the Texaco Star story, Della departed New York for Los Angeles in 1916, but history says Effie and Avis were the first women to make that trip, so, she missed setting a record by months. Della settled in Los Angeles afterward, and census records have her in Compton in 1926 – working as a manicurist again, as well as a shop clerk. After 1926 she vanishes from the voter roles, so nobody really knows what became of her, but for those glorious few years in the teens she lived the adventure of a lifetime.

Photos courtesy the Harley-Davidson Archives, and Google's digitization of these 100+ year old periodicals