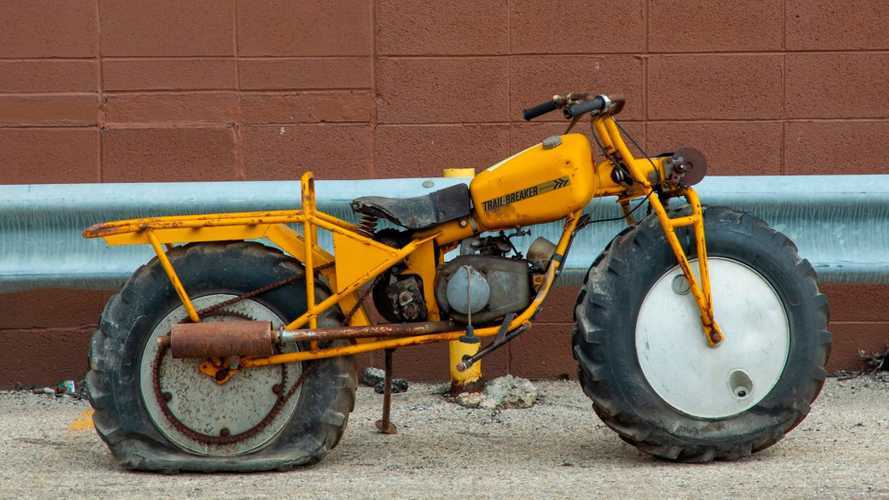 This is a project bike that's seen rough treatment

Looking for a project bike that’s going to be a challenge, and different from anything you’ve worked on before? This Rokon Trail-Breaker, for sale at Mecum’s 2020 Indy 200 auction, should qualify. It’s weird, it’s really beat-up, and you don’t see many other Rokons on the trails.

Maybe you don’t know what a Rokon is, or why you would ever want one. The short answer is that a Rokon is an oddball, two-wheel-drive, off-road bike. The long answer is that the Trail-Breaker is one of the least-known stories in the U.S. motorcycle industry, but it’s one of the most interesting. It’s one of the longest-produced motorcycle models in the world— built in New Hampshire since the mid-1960s—with a few years of production in California before that, under the Nethercutt brand.

Also Coming Up At Mecum:

The Trail-Breaker is an extremely utilitarian machine, designed for A-to-B transportation through rough terrain, not shredding through the woods at high speed. There have been slight design changes over the years, including different engines, but overall, the bike has remained largely unchanged for five decades. Until recently, all versions of the Trail-Breaker used fan-cooled, two-stroke, single-cylinder engines that made 7-10 horsepower depending on the year. Now, Rokons run Kohler four-stroke singles. The Trail-Breaker has chain drives to both the front and rear wheels, providing 7-10 horsepower through almost all terrain. The big, fat tires have gobs of traction, and provide flotation across waterways, if needed. At least, that’s what Rokon riders claim. You can also fill the wheels with gas or water, if you need to carry supplies a long way.

Even today, most of the bike looks more-or-less like the original machine designed in the late 1950s—you couldn’t call it stylish, but it has a, uh, rustic charm. If a woodsplitter and a motorcycle had a baby, this is what it would look like.

The idea of a go-anywhere motorcycle sounds great, but who would want such a beast? Rokon aims for sales to forestry workers, farmers, and other people who needed practical all-terrain transportation, not speed (cruising speed for the Trail-Breaker is roughly 20 mph). Occasionally, the machines’ unique capabilities found use in other roles; in the mid-’70s, a pair of adventurers used Rokons to tackle the almost-impassible jungles of Panama’s Darien Gap, the first motorcyclists to actually get their bikes through there.

The Mecum ad doesn’t say what year this particular example was built in, but it appears very similar to the Trail-Breakers from the late 1960s or early 1970s, with a West Bend engine. The frame paint is roughly the right color, and the engine appears similar, although it also appears to be missing some bits. At least the majority of the bike seems to be there, and since it uses a simple stationary engine, it might even start up. However, the flat tire and rust, rust, rust, should tell you this bike is in need of major work, even if the engine runs. Given the nature of the Rokon design, though, you might find this bike is actually quite easy to repair, and a lot of fun when you’re done.