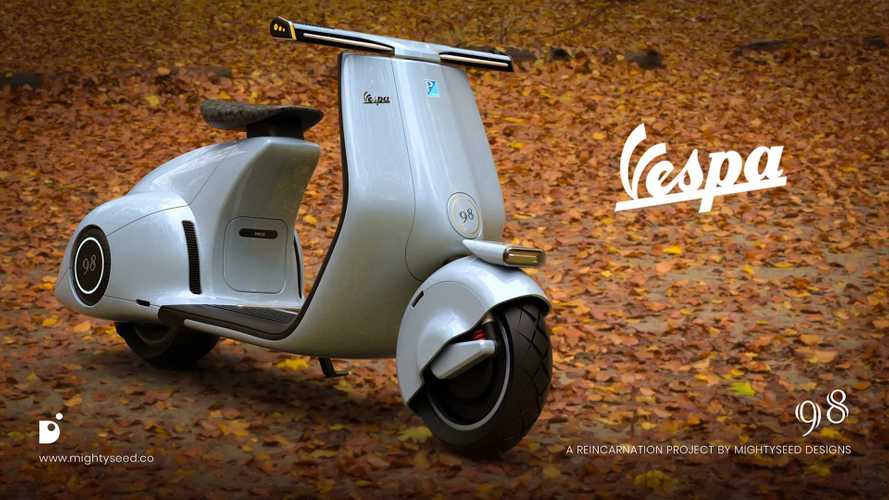 Even more than being an iconic brand name, Vespa is an iconic silhouette. By simply uttering that one Italian word, people who could not possibly care less about motorcycles or scooters instantly picture one in their mind’s eye. It might not be perfect, and might kind of be like a little kid drawing their first crayon picture of a Lamborghini Countach, but it’s still unmistakably a Vespa.

Still, times change, and people and their preferred objects change along with them. While there’s no denying that Corradino D’Ascanio’s original Vespa design is an industrial design icon for the ages, iterating on that design to bring it into the future in no way diminishes the original’s value.

Kerala-based design firm Mightyseed Designs took D’Ascanio’s original and electrified it. “But wait,” I hear you thinking. “What about the Vespa Elettrica?” If the electric scooter revolution has shown us anything, it’s that there’s room for far more than just one electric scooter. Vespa itself fields any number of gas-powered scooters at the same time. Often, multiple models share a single engine, and just offer different styling cues and accessories to suit different rider aesthetic desires. Why shouldn’t it be the same for electrics?

Mightyseed’s Vespa 98 is not your father’s Italian scooter. Instead, this 98 looks like the future from the front and the back, while simultaneously transporting you back to art deco times in profile. It’s a unique accomplishment, made all the more special by the fact that these two aesthetics seem to blend seamlessly together, and do not clash. It’s the future and the past tossed into a blender, with LED light strips on the front and a LIDAR system mounted in place of those pedestrian, oh-so-yesterday side mirrors. It’s the Vespa of the future giving you massive side-eye for ever doubting it could upshift like this.

The concept stuffs a 30 amp-hour lithium-ion battery pack deep into its belly, opening up a whole world of under-seat storage space. Like many electric scooters, it features a hub-mounted motor at the rear wheel. It’s a single-seater, and it’s waiting for us all to take turns hopping on, and then each go for a very quiet ride. Would you?