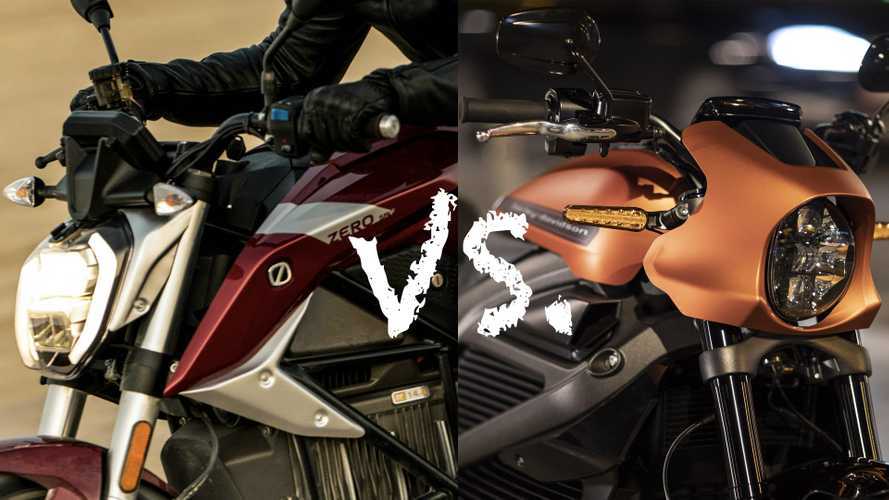 The electric motorcycle industry is growing with new players added almost every day. In the U.S., the most popular company in the segment is undeniably Zero Motorcycles. After years thriving in the off-road segment, the California-based manufacturer recently entered the sportbike segment with the addition of the performance-oriented SR/F in 2019. Zero isn't the only player in the American-built electric streetfighter game, however.

After years of development, Harley-Davidson finally launched the LiveWire, also in 2019. While marketed differently, the two models are direct competitors but how do they compare? We decided to break it down for you in this spec showdown between the 2020 Zero SR/F and the 2020 Harley-Davidson LiveWire.

It's hard not to want to compare the two models considering their looks and their role on the market, despite the manufacturers different approach with their marketing. Zero markets the SR/F as its first performance bike and banks on its inherent Californian coolness to spread the message while Harley sticks to its "premium product" guns and targets a more elevated audience with its $30k bike.
Looking at what the two bikes have to offer side by side, we immediately notice who has the advantage in what field. Let's break it down.

This is where the SR/F classification as a "performance electric motorcycle" gets a chance to shine. The Zero beats the LiveWire in every performance aspect from output, to top speed, to power-to-weight ratio.

Not only is the SR/F more powerful (140 hp and 110 lb-ft vs. 105 hp and 86 lb-ft), it's also lighter than the Harley which results in a more interesting behavior if you belong to the school of thought that green doesn't have to be boring.

Don't be fooled, however: while it's not as powerful as the Zero, the Harley can still pull its weight and be exciting enough not to be entirely dismissed from the category. It's all about the ride mode you choose and the way you ride.

Right off the bat, the Harley-Davidson is more interesting than the Zero in terms of charging capacity for the simple reason that it's DC fast charging compatible. Zero doesn't offer the technology which is a shame. The expression "quick charge" doesn't have the same meaning for the two brands and that's something to keep in mind especially if you travel long distances.

That being said, it also means that to take full advantage of the LiveWire's perk, you have to have a DC fast charger installed at home and/or have to find one out in the wild and that's where the problem is: they aren't as widespread as Level 2 chargers.

If all you have access to are Level 1 or 2 chargers, then Harley's advantage completely disappears.

Also note that the SR/F offers a better range than the LiveWire which means it doesn't have to be charged as often, especially if you mainly use the bike to commute. Zero rates the SR/F's electric range at 146 miles in the city, 99 miles on the highway (at 55 mph, 82 miles at 70 mph), and 123 miles city and highway combined (at 55 mph, 190 miles combined at 70 mph).

Harley-Davidson lists the LiveWire's range at 146 miles in the city and 95 miles combined, an 70 miles on the highway, as confirmed by the Harley-Davidson representative.

The bottom line is that you will technically travel further with the Zero but that it will also take longer to charge.

Price-wise, there's a very obvious gap between the two models—a $10,300 gap to be precise. Of course, that makes the Zero look more appealing from the onset but consider this: the SR/F is also of inferior quality. When looking at how the saddle is treated and how the components fit together, you notice immediately that Zero doesn't quite offer the same quality of finish as Harley. The plastic controls and the top case cover are the most obvious examples of where Zero could improve in its assembly work.

Also keep in mind that the entry-level Zero gets you the slowest charger and that the upgrade to the 6 kW rapid charger costs $2,300. The LiveWire comes with a standard DC fast-charger and is also Level 1 and 2 charger compatible. On the flip side, the Zero does get you better performance and a longer range.

So, which one will be your pick? Ultimately, it should all come down to what your priorities are. The 2020 Zero SR/F gets you better performance, a better range, at a smaller price while the 2020 Harley-Davidson LiveWire plays up the premium card with better quality materials, and a DC faster charger.