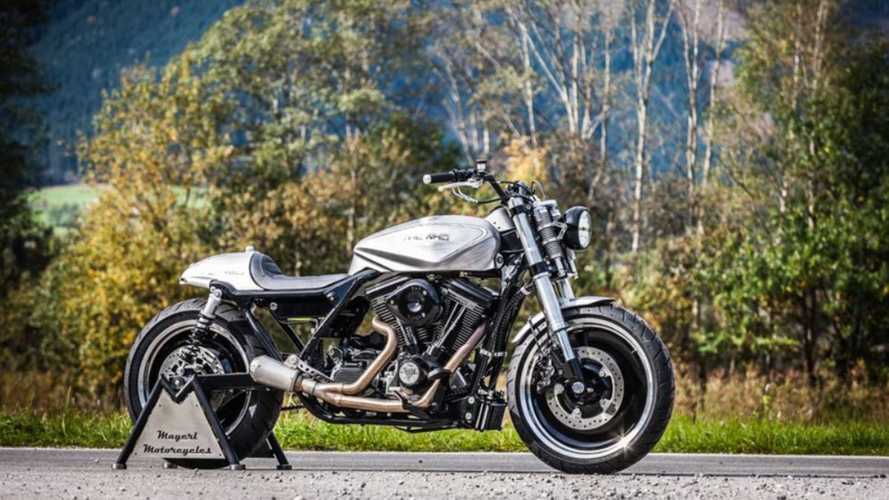 The bike of Theseus.

If you’re looking for a pavement pounder with all the accouterments, look no further than Harley-Davidson’s Electra Glide. From the storage space of the side bags and top case to the wind protection of the iconic batwing fairing, the company’s first electric-start motorcycle has been the choice of many touring riders since 1965. However, if your roads are narrow and curvy instead of long and straight, the Electra Glide doesn’t provide many benefits. To help the hefty Harley carve the local Austrian canyons, Wolfgang Mayerl transformed a 1986 Electra Glide into a barebones roadster.

Without Bells And Whistles, The 2020 Indian Challenger Now Available

As a full-time mechanical engineer, Mayerl has been moonlighting as a custom motorcycle builder for three years. Long before Mayerl Motorcycles, the Austrian native always tinkered with bikes and built his first moped at the age of ten. Looking for a challenge, Mayerl specifically chose the Harley tourer because he didn’t “know anyone else who has radically rebuilt an Electra Glide.”

While the Electra Glide is rarely considered the perfect specimen for a custom project, Harley-Davidson radically rebuilt the Electra Glide into the Super Glide in 1971 and later reshaped the Tour Glide into the FXR in 1982. Pairing big twin power with the handling characteristics of the smaller Sportster created the FX line, and Mayerl Motorcycles borrowed a page from the Motor Company’s playbook with its build—The Who.

Gallery: The Who: 1986 Harley-Davidson Electra Glide

First off, Mayerl ripped off hard bags, top case, batwing fairing, crash bars, and fenders. With the bike stripped to its essence, the Austrian builder added USD forks from a GSX1300R Hayabusa and a set of Öhlins rear shocks to the reinforced Electra Glide frame. The Who also borrowed aluminum disc wheels from a Harley-Davidson V-Rod with Dunlop D407 tires to provide more grip on the mountain passes.

Turning to the powerplant, Mayerl replaced the aging 80 cubic-inch (1340cc) Evo with an S&S Cycle 113 cubic-inch (1850cc) engine. A legendary S&S teardrop-shaped Super G carburetor matched the blacked-out motor and a Mayerl created a custom exhaust for the build. Next, he updated the transmission to a six-speed gearbox with a Barnett clutch and Dyna 2000i ignition.

Mayerl hand-shaped the cafe racer style bodywork from 1.3 mm steel sheeting and radically shortened the front fender compared to the tire hugger originally on the Electra Glide. Using his mechanical engineering ingenuity, the garage builder repurposed the tail section as an oil reservoir, fashioned the oil cooler as external fork springs, integrated the rear lighting into the backend, and consolidated the electronics.

Topping off the build with a set of wide flat-track handlebars, Mayerl ensured that the former tourer would enjoy a new life in the twisties of Austria. According to our colleagues at Bike Exif, it seems like Mayerl is targeting a KTM for his next build. We severely doubt that he will turn the Ready to Race machine into a mile-muncher, but we can’t wait to see the results nonetheless.