Can This Beautifully Restored Crocker Crack A Million At Mecum? 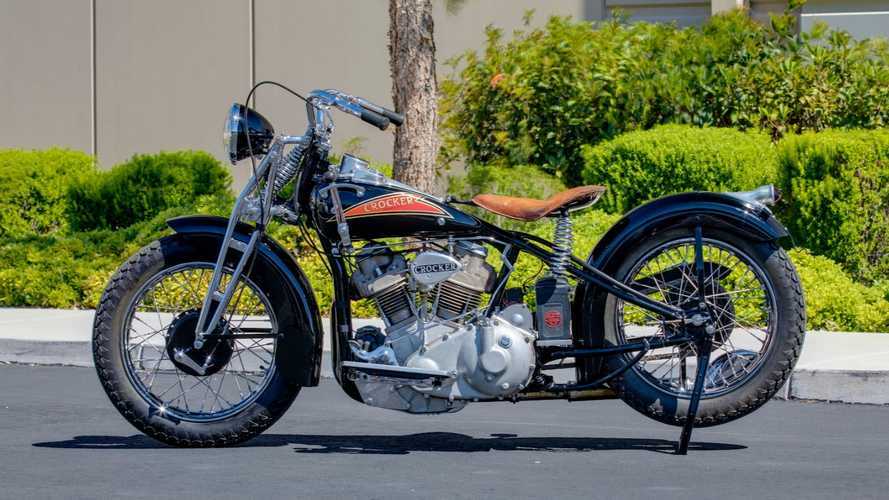 Values keep getting closer to that benchmark for this rare American iron.

Back in January 2019, a 1939 Crocker Big Tank sold for an astonishing $704,000 at Mecum Las Vegas. It’s rare to see Crockers available for sale or auction anywhere, but we’re about to see a second one go to the block in August 2019. This painstakingly restored 1937 Crocker Small Tank is due to cross the Mecum Monterey auction block on Saturday, August 17. Current estimates on its final value are between $600,000 and $700,000.

No More In The Oven:

Moto-History: What Happened to Crocker Motorcycles?

Crockers are renowned, to this day, as being some of the finest American motorcycles ever made and they featured astoundingly innovative thinking in their heyday. According to Silodrome, comparable Harleys and Indians of the time only produced half as much power. In fact, this led founder Al Crocker to offer a money-back guarantee to Crocker owners if they ever found themselves beat by stock Harleys or Indians out on the street.

Yet, when all was said and done, fewer than 75 Crocker Big Twins were ever made—including this one. World War II made production unfeasible, and founder Al Crocker went on to make airplane parts during the war. He never returned to motorcycle engineering and building, which is a shame because he was clearly good at it.

Between early Crocker Speedway bikes and its gorgeous Big Twins, the company built fewer than 200 motorcycles throughout its too-short lifetime. This particular one made 60 horsepower when new and had a top speed of 110mph. Before World War II, it was at one point the fastest motorcycle in the world, according to Mecum—even managing to best such revered legends as the Brough Superior SS100.

This particular example has been fully restored at 1346Venice in Sydney, Australia by Crocker experts Les and Jolly. Even though it’s massively collectible, the two restoration experts re-engineered the clutch to make it more rideable, in case the new owner wants to flog it down to their next vintage bike night.

If you think all of that is astonishing, you should also know that an unrestored 1936 Crocker Small Tank is in the ranks at Mecum Monterey, and is estimated to fetch between $700,000 and $800,000. Serious question, everyone: Do you want this bike, or do you want a house?