A Lovingly Restored Yamaha XT500 Is The Best Family Heirloom 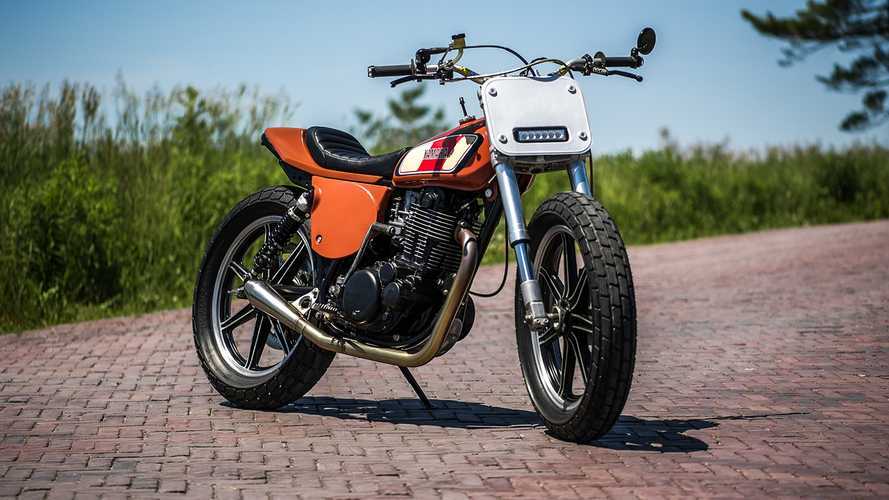 It's a great father-son project and also a really gorgeous build.

When you think of a family heirloom, a motorcycle is not the first thing that pops to mind. Why not, though? A family of motorcyclists would appreciate that more than any knick-knack.

Such is the case with this 1977 Yamaha XT500. A well-cared-for bike can last many generations and after a point will increase in value. This one, though, spent some time being not so well cared for.

This particular bike belonged to Jerrett Bellamy’s father. They live in Ontario, Canada where Jerrett’s father would give him rides on the bike when he was a kid. Lots of us have memories like that, right? And what comes next is typical: his dad sold the bike.

That’s usually where the story ends. Not this one, though. The man who bought the bike was a local, and apparently never had the “round tuit” to get to the bike. He parked it in his shed and it sat there for twenty years. Jerrett’s father reconnected with the man who still had his old bike, offered several times to buy it, but was rebuffed each time: that buyer was going to restore the bike one of these days.

Well, he never did, and he finally admitted to himself that he wasn’t going to find that motivation. Instead of selling the bike back to the family, he just gave it to them.

That’s when the fun began. Jerrett’s father pulled the engine to rebuild it, and the son did, well, everything else. They seem to have a few motorcycle parts in the shed themselves; Dad still had the seat they’d used on that bike twenty years ago. Jerrett reshaped it and sent it off to be beautifully reupholstered.

The rest of the bike has received a thorough update as far as its functionality goes, but the father-son duo kept the retro look of the bike. They named it “Project X-Tracker” inspired by Jerrett’s supermoto, flat track and BMX racing career. Since he’s a mechanical engineer by trade, he designed a bunch of the bike’s modifications in CAD before modifying them and the bike and then bolting them together.

The rear wheel has the brake disc and drive chain sprocket on the same side. The upgraded parts include a master rear cylinder off a GSX-R, and a disc from a Triumph Trophy A Ducati Monster was relieved of its Brembo caliper to help this little bike stop. The front forks were donated by a 1996 GSX-R 750, de-tabbed and cleaned up.

Thanks to Pipeburn, the build has been thoroughly photographed (go visit their page for more pictures) and we love it. Does your family have a motorcycle that will be passed down, included in a will, or fought over later?