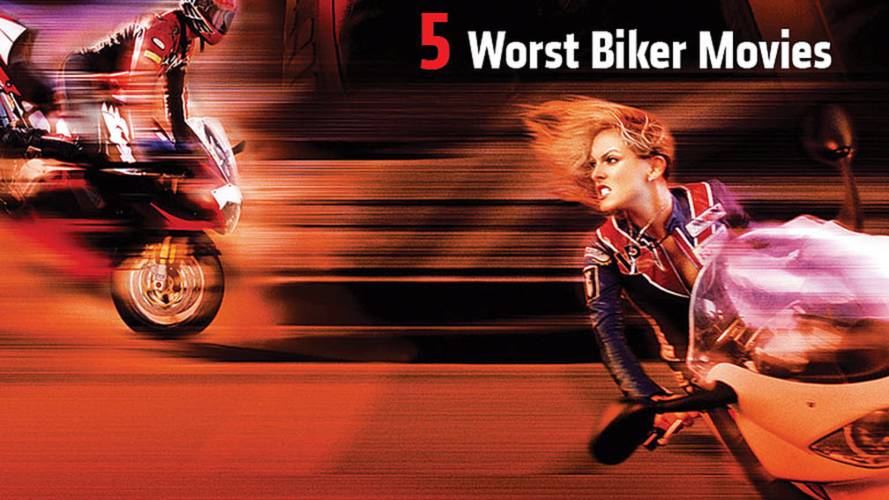 We painstakingly locked ourselves in a room to determine what were the 5 worst biker movies. Agree with us or not, we put in the man hours.

We all know the classics: Easyrider, the Wild One and On Any Sunday (which replaced holiday movies at Christmas time for my family), but what about the ones your non-riding friends ask you about? The ones that make you cringe when you hear the dialogue or that make silly mistakes like show the clutch lever on the wrong side?

This list excludes the B-movies and ‘70s grindhouse flicks that might fall into another level of terrible that actually make them enjoyable. We focused on the mainstream, big-budget movies that let Hollywood make a mockery of the motorcycle world. This is our list of five of the worst biker movies ever.

Similar to Fast and the Furious for bikes, but with a lack of cool vehicles, cult following, and endless sequels. Biker Boyz is ranked fifth, because we always have high hopes when it comes on TV late at night. Great cinematography with a decent Southern California sound track that makes for enjoyable moments, but then again, those are the parts when no one is talking.

It's a movie filled with semi-appealing pieces and a plot that could have been salvaged. A young man whose father died and who tries to make his name in the street racing scene is a decent enough story, but none of those things could have overcome the cringe-worthy dialogue and fabricated drama. Rarely do movies capture what it's really like to race or ride, a Biker Boyz continued the trend by concentrating on forced drama in order to appeal to the general public who doesn't know a piston from a sprocket. The flat lines and silliness easily overpower the plot and cinematography. For that disappointment of yet another big-budget flop in motorcycle movies we start the list of the top 5 worst motorcycle movies of all time with Biker Boyz.

Replace an “S” with a “Z” in the title? Who could have guessed this movie wasn't going to be a classic?

4. Harley Davidson and the Marlboro Man

Great actors with ridiculous dialogue and plot and you have another painful motorcycle film. It's less of a motorcycle movie and more about two guys who happen to ride motorcycles. Harley-Davison and the Marlboro man reach another level where the movie does actually become enjoyable as a campy, over-the-top action movie.

Harley Davidson and the Marlboro Man plays homage to Butch Cassidy and the Sundance Kid, with its only saving grace being the relationship between the two main characters, Harley-Davidson and Marlboro—yep, the character’s real names. It’s a messy plot where they try to save an old hang-out bar by robbing an armored car, which turns out to be filled with drugs and then Tom Sizemore and Daniel Baldwin try to kill them and their friends, but spoiler alert! Harley and the Marlboro Man team up to save the day. Bad acting from good actors with ‘80s’ action and little continuity is usually a recipe for success, but it’s listening to Mickey Rourke recite his lines painfully slowly that make it one of our least favorite biker movies.

Rourke left acting and went back to boxing shortly after this movie saying he lost respect for himself as an actor. The movie cost around $23 million to make, a pittance by today's standards, yet still only pulled in $7 million at the box office.

Based the classic comic book that I grew up reading, Ghost Rider was another movie with potential that quickly succumbed to bad acting, plot, and dialogue… and stunts, directing, and pretty much everything else.

Based on the Johnny Blaze story line of Ghost Rider, the most commonly chosen story, as multiple characters were forced to don the flaming skull through the comic book series. The 2007 movie followed Blaze as he sells his soul to a Devil and then turns into a demon with a flaming skull. An anti-hero, Ghost Rider would come to life when surrounded by evil, at night, or when he smelled the dropping of innocent blood, forcing the pain of innocent suffering to whatever evil inflicted it.

The comic character is a deep, troubled, and complicated guy that blurs the line between good and evil, doing a little bit of both himself. However, the movie Johnny Blaze was a cheesy guy who haphazardly discovers he can turn into ghost rider and doesn’t come close to capturing the deep, antihero of the comic book. Put that around a subpar plot and forced, bad Southern accents and you have another bad biker movie.

Normally we are tired of seeing Peter Fonda-cameos in every movie that has even a smell of motorcycle in it, but he was the only saving grace in this movie, playing the devil that commissions the Ghost Rider.

With a director known for Britney Spears and Backstreet Boys videos, who would have guessed that Joseph Kahn's first full-length film about biker gangs would have been a train wreck--pun intended. With outlandish stunts like racing on top of a train and back flipping a jet-powered street bike over a roll-back truck, this is a case of cheesy, unbearable action backed by equally bad dialogue, plot, and characters. It's a trifecta of crappiness, with no disappointment of missing out on any great potential. If you take all of the bad features of every movie listed and make one movie with it, you'd have Torque.

My favorite line was not in the movie, but rather featured in HBO's Entourage, a TV show about the behind-the-scenes culture of actors in Hollywood, when the main character Vince bumps into Torque actor Jaime Pressly. After hearing her complain of a lack of work he replies: "there's always a Torque 2."

Did you know Dane Cook was in Torque? In his entire one-earring, pop-collar, ‘90s glory.

Bikes, Babes and Blood! An homage to ‘70s B-movie biker flicks, it was written, starred, and directed by Joey Bishop who often played a dirty biker in ‘70s cinema. He fell off in the ‘80s and bounced by with several cult-classic '90s movies that he again wrote and starred in. For Hell Ride he was backed by Tarantino, who had limited involvement, and it was decent attempt at making a movie that you wrote, directed, and starred in. Where it falls on its face is with more constant over-the-top cliché biker action with a plot that kind of goes nowhere. Despite the bad result of a movie, it does have a cult following who embrace the grindhouse campiness.

With characters' names like The Gent and Ape-Shit, it's hard to wonder what went wrong? And it has yet another cameo by the late and great Dennis Hopper in a less than great movie.

This is our subjective list of five of the worst biker movies ever. What would you add?