How To: Buy a Used Motorcycle Like a Pro 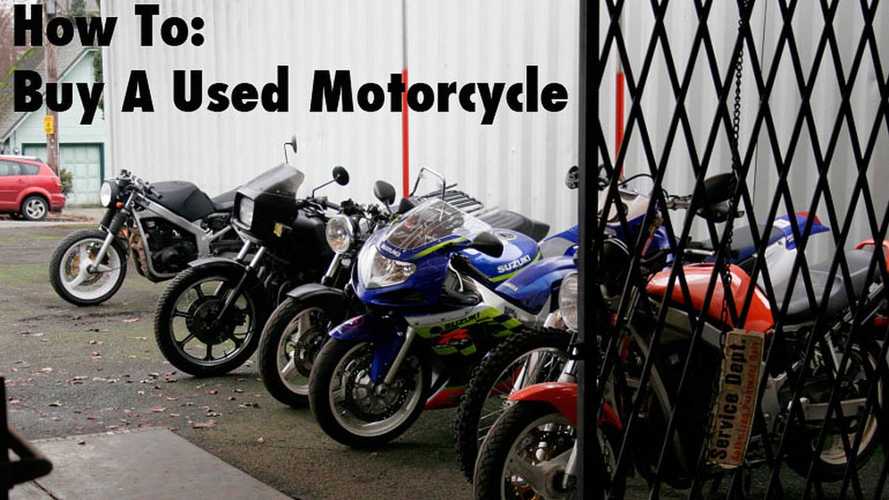 Forewarned is forearmed, after all.

Buying a used motorcycle is a good way to get a perfectly running machine for dirt-cheap while also stretching your budget to get you on a much nicer bike. Here are our favorite techniques for getting the most value when you buy a used motorcycle.

ADVICE? WE GOT IT

There's a time and a place for everything, and that includes buying used motorcycles. If you can wait and you're willing to plan ahead, try to buy your used bike in the fall once riding season is over. Once the weather gets cold and the leaves fall it's a buyer's market and you can find some pretty killer deals. This is especially true of bigger, fancier, more expensive bikes *coughHarleyscough* whose owners have ridden for a season or two and discovered, too late, that they're not cut out for motorcycling.

Be Willing to Travel

Used motorcycle values vary wildly based on geographic location. The Manufacturers Suggested Retail Pricing (MSRP) and the addition of dealer fees usually dictate new motorcycle prices, with little variance. Pricing in the used market, however, is based on supply, demand, and what people in any geographic area are willing to pay. Los Angeles tends to believe 1970’s used Hondas that need work are worth $3,000-$5,000, while Bakersfield (50 miles north) has them for $1,500-$2,000. If you are willing to extend your search into areas that aren’t subject to fads, you have a much better chance of getting a better deal.

Buying a used motorcycle is a way to get a motorcycle with the aftermarket options you want, already installed. The downside is that the seller often believes the aftermarket additions are worth the amount they paid for them (including what they paid for installation). New tires, a fresh oil change, or nice exhaust system are nice additions to a used motorcycle and will save you ownership dollars. These items are worth paying a little more for, while personalization bits like fancy levers and new mirrors are not.

How Many Miles Is Too Many?

The used motorcycle market is interesting because of the wildly varied use of the inventory within it. My dentist thinks hitting 1,000 miles in a year is a lot of riding. Many people view motorcycles as Sunday toys, which contributes to the idea that motorcycle engines can’t handle regular use. If you have two identical options side-by-side and one has 20k less miles, that’s obviously the better buy. If the bike you want has 30k-40k miles and looks like it’s been taken care of in the process, don’t be afraid to buy the bike you want as the engine has plenty of life left in it.

It’s your right to offer however much you can afford to spend on a used motorcycle. Offering too little, however, can be taken with offense and can be the difference between a sale or not, so know the market, know the product and offer something fair. You never know when the seller has aftermarket additions he planned on selling separately but will toss in because he likes you and you treated him with respect. Remember, we are all just trying to get the most out of our money.

Simply having the service records can tell you if a motorcycle has been maintained during its previous life. Verify that the bike has had its regular checkups, while also looking for anything irregular. Also, note its most previous service to determine what it will need next and when it will need it. A motorcycle 400 miles short of a major service just became $1K more expensive.

Can I Give It a Test Ride?

Yes! There aren’t any warranties when buying used, no matter how much the seller says he has a mechanic you can visit or how soon he’ll find those extra parts for it. It’s really important to learn as much about the bike as possible. Motorcyclists love to tinker with their bikes and it’s important to get a feel for the one you are considering. Just make sure you bring a license, gear and the asking price in cash…just in case.

Have It Checked Out

If you aren’t mechanically inclined and want to hedge your bets a little, it’s worth paying a mechanic to look at a prospective new purchase. Yes, you’ll lose some of the financial benefits of buying used, but you’ll also have a much better idea of what you’re getting yourself into. See if the seller will let you take it in somewhere, or bring your mechanic a bottle of something nice and ask him to make a house call.

That’s our best advice, now share yours with us. What are your go-to strategies for getting the best deal when buying used?