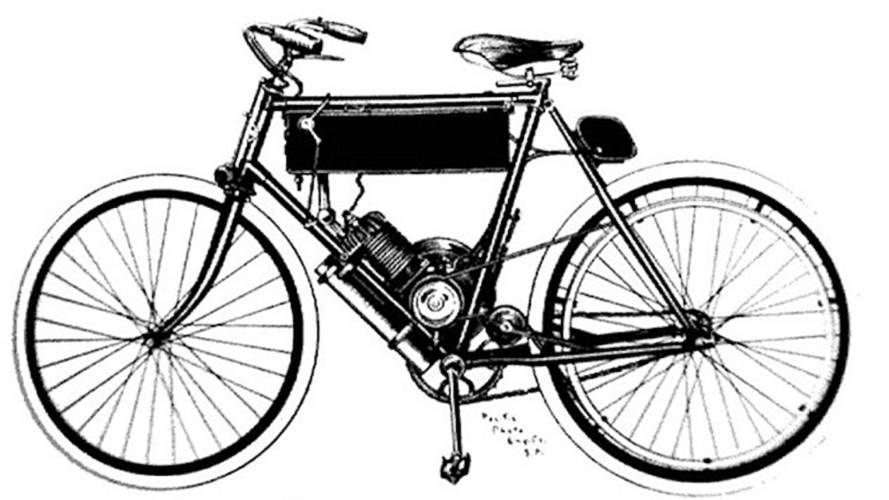 Here's a little history for you!

RideApart has previously mentioned the heroic crosscountry trips of riders like Erwin “Cannoball” Baker and the Van Buren sisters, but the tale of George A. Wyman goes back even further.

In 1903, Buffalo Bill Cody was touring the country with Annie Oakley and Calamity Jane. Chief Joseph was still alive. Alaska, Arizona, Hawaii, New Mexico and Oklahoma were not yet U.S. states. And in mid May of that year, Wyman set out to ride from San Francisco to New York.

George Wyman being interviewed by a reporter

The journey would end up taking Wyman 50 days and would prove to be a tremendous test of his endurance and ingenuity.

Wyman’s California Motor Company “motor-bicycle” was little more than a bicycle with a 1.25-hp engine strapped to it. Apart from a handful of wagon trails that pioneers had used only a few decades earlier, there were no routes crossing the country. In fact, according to Wyman’s accounts, some covered wagons were still using those wagon trails.

Wyman primarily used railroad tracks. They were bumpy but at least provided a reliable route and more solid riding surface than the surrounding sand and mud.

READ MORE: Riding a KTM 1190 Across the Country | RideApart

Crossing over the Sierra Nevada mountains he trundled through the desert of Nevada, across Utah, Wyoming, Nebraska, Iowa, Illinois, Indiana, Ohio, Pennsylvania, then across New York state from Buffalo to Albany and south. He suffered every kind of breakdown imaginable and actually ended up having to pedal the last 150 miles.

Certainly it was Wyman’s experience that the vehicle he was riding was totally unknown to everyone who saw it.

“In every place through which I passed, I left behind a gaping lot of natives, who ran out into the street to stare after me,” he wrote.

Wyman’s account is charming and offers a view of an America that is effectively foreign to modern citizens of the country. The George A. Wyman Memorial Project website has gone to the trouble to transcribe his tales to make them more easily accessible.

The project has also gone to the trouble to research Wyman’s route and put together a number of GPX files and rider’s guides that allow modern riders to retrace his steps as accurately as possible.

Welcome to your next big road trip. It probably won’t take you 50 days, though –– unless you want it to.