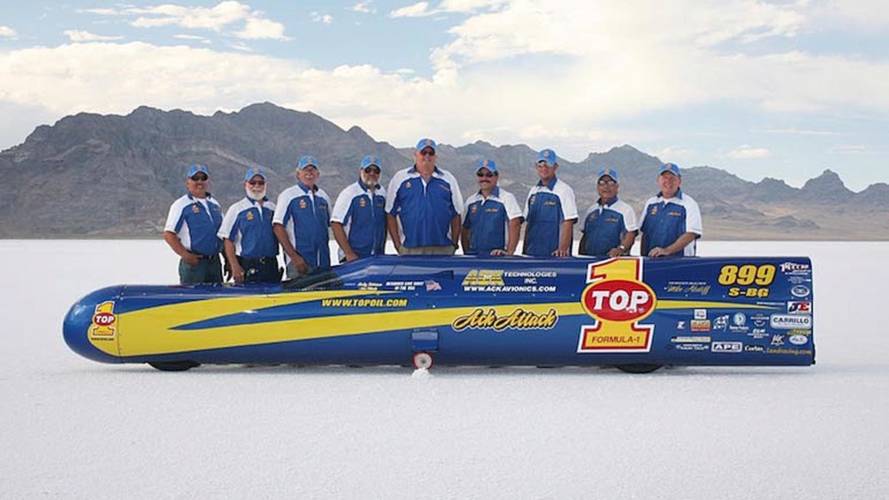 The world's fastest motorcycle is aiming to go even faster, this time targeting 400 mph.

Ack Attack, the current world record holder of the motorcycle land-speed record – at 376.363 mph – is hoping for another record run. Not at Bonneville this time, but on Bolivia’s Salar de Uyuni salt flats in the Andes Mountains.

The attempt is set for August 3-8.

“Bolivia has been selected because it has a much longer run up and down of 16 miles versus about seven miles at Bonneville,” explained Ack Attack pilot and three-time world land speed record holder Rocky Robinson. “This makes it safer, too. Wheel spin on driven – not thrust/jet – streamliners is a danger, so the acceleration has to be very gradual to avoid awkward handling. Distance is your friend!”

Ack Attack is powered by two Suzuki Hyabusa engines, heavily modified, of course, and boosted with a turbocharger. The team claims a mind-boggling 900 hp for the machine.

“Honestly, we would have preferred to set the record in Bonneville,” said Frank Ryan, head of sales and marketing for TOP 1, Ack Attack's sponsor. “However, several years of bad conditions at Bonneville, coupled with record rainfall this year, means we have to travel to the top of the world to find optimal conditions. Those conditions just happen to be at 12,000 feet above sea level in the Andes Mountains.”

Salar de Uyuni is the world's largest salt flat at 4,086 square miles, with an elevation of 11,995 feet. The high elevation will play havoc with fuel management, and the harsh conditions will take their toll on the entire team, but Robinson says they are on a mission to not only defend the current record but also to be the first motorcycle to break 400 mph.

“When we started to build the TOP 1 Ack Attack in 2003, our goal was to exceed the record of 322 mph that had stood for 16 years,” said builder Mike Akatiff. "But in the back of my head was the thought that we could build a bike to actually go 400 mph."