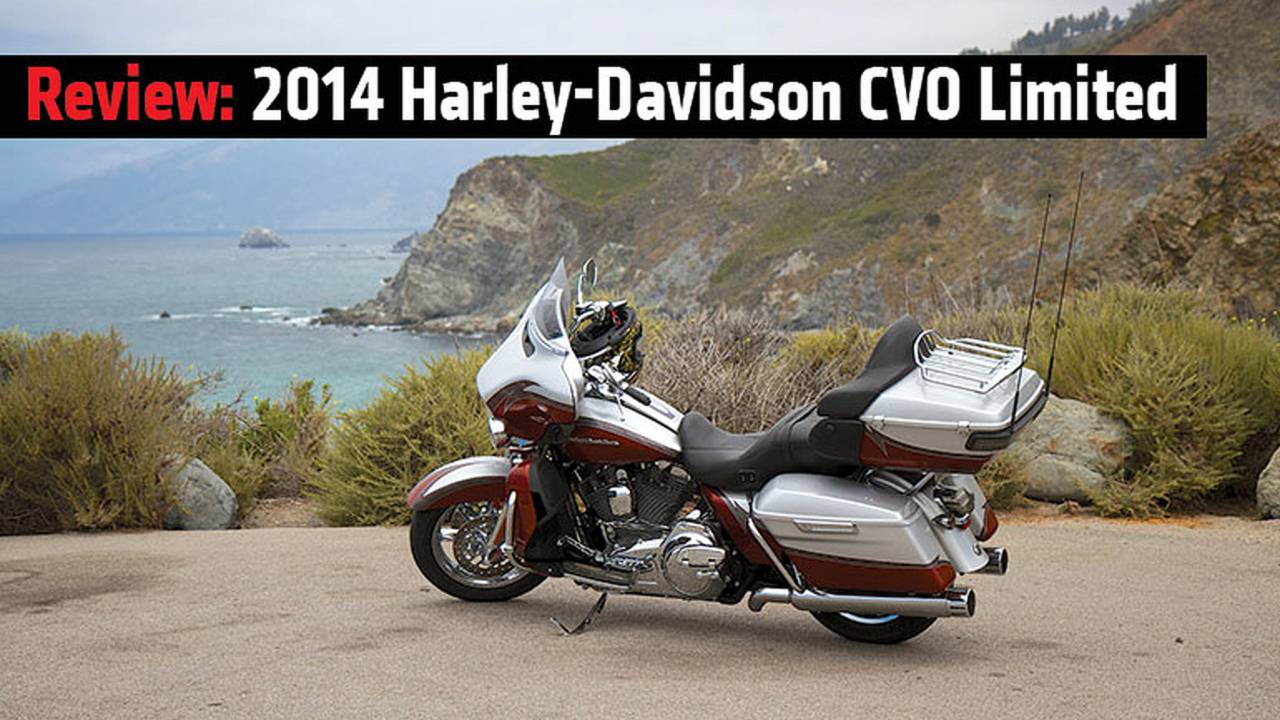 Harley-Davidson haters, please stop reading now. Nothing that I write is going to convince you that a bike that weighs nearly half a ton and costs close to forty grand is worth your consideration.

You’ve read about Project Rushmore on these pages. Harley-Davidson entered into a “customer-driven effort” to “fundamentally enhance every aspect of the riding experience.” The results rolled out in the Touring bikes for 2014, including the Road King, Street Glide and Electra Glide. (The Road Glide was cut from the lineup this year.) The CVO Limited benefits from the Project Rushmore enhancements, plus a whole host of performance, comfort and appearance additions that leave few catalog pages unmolested.

“CVO” stands for “Custom Vehicle Operations,” Harley’s internal factory custom shop. Each year, a handful of models get the CVO treatment, which includes Screamin’ Eagle performance parts, bolt-on accessories, custom paint jobs and more. CVO bikes are produced in small numbers, and cost thousands of dollars more than the stock bikes. They are considered collector’s items by many buyers, and often command top dollar on the used market. While some riders treasure the blank canvas of a base, stock bike and relish the opportunity to customize and personalize their new ride over time, the CVO bike caters to well-heeled buyers who want an instant factory custom, and are willing to pay for it. CVO buyers get a factory-backed suite of accessories and enhancements, without having to expend the effort and energy of wrenching on the bike themselves (or paying someone to do it, piece by piece).

The CVO Limited is the ultimate expression of the H-D factory custom program, and as such will be a dream bike for some, and completely off the table for others.

The really big news in Project Rushmore was the implementation of liquid cooling on the engine. Harley is introducing this concept slowly, starting with just the high-end touring bikes. The CVO Limited gets the Screamin’ Eagle Twin-Cooled Twin Cam 110 engine, which routes liquid coolant through the cylinder heads and around the exhaust valves to help reduce operating temperature. The radiators or heat exchangers are concealed in twin housings in the fairing lowers where previous bikes had small storage compartments; there are few external signs that the bike has a liquid-cooled component.

The iconic batwing fairing has been redesigned for the first time in 20 years, and now includes an operable vent in the windshield that helps to generate some cooling airflow in the cockpit. New, larger gauges cater to older eyes, and now include a gear indicator, which I always appreciate. The new Daymaker LED headlight is integrated into the fairing, and throws a very effective beam. LED foglamps further enhance visibility. The hard saddlebags and Tour Pak have been reshaped, too, and now feature effective, one-touch latches that are a big improvement over the old, finicky ones. The top-opening saddlebags are now hinged on the outside, so they can be operated from the rider’s seat without getting off the bike, if necessary.

ABS brakes are standard on the CVO Limited, and they are electronically linked (in typical H-D fashion, they get a cool trademarked name: “Reflex Linked Brakes”). The linking function operates above 20 – 25 mph, which means that you retain separate front and rear braking function at low speeds, which helps control in U-turns and parking lots. The front forks have been bumped up to 49 mm (from 43.1), and the whole front suspension has been beefed up accordingly, including stiffer triple clamps and larger wheel bearings.

Infotainment is the word of the day, and the CVO Limited has a passel of it. The system centers on a high-resolution 6.5” color touchscreen that acts as the information and control screen for a variety of functions, including GPS navigation, audio and Bluetooth connectivity. For riders who like to pollute the air with their taste in music, there’s 75 watts of peak power feeding four speakers. There’s also the option of connecting a Harley headset into the center console (and one in the rear for the pillion), and keeping your Led Zeppelin to yourself. Hook up the headset, and you’ve got access to voice control, which allows you to command the system via simple voice prompts. The system was designed with motorcyclists in mind, and is easy to operate while wearing gloves and while in motion. As with any onboard infotainment system, the risk of distraction is high. It is possible to connect a Bluetooth-capable smartphone to the bike, and to accept and place phone calls while riding. If you think distracted driving in a car is a problem, you can only imagine how risky this is on a bike. I disabled this function on my cellphone for all of my test riding, and only tried out the connection while parked, where it worked great. There’s also a compartment in the fairing with a USB connection, and you can connect an iPod or other mp3 player for access through the bike’s audio controller, and it will even charge while you’re riding. My 160-GB iPod Classic overwhelmed the track navigation menu, but I was able to access playlists that I had created for my ride, and had a good listening experience anyway.

I took the CVO Limited out for a five-day ride around California, about 1,500 miles in total. I started in Los Angeles and rode to Paso Robles; from there I went to Santa Cruz; then to Vallejo and over to South Lake Tahoe. I rode over Tioga Pass into Yosemite to Merced, then on into Kings Canyon and Sequoia National Park, down through Bakersfield and back to Los Angeles again. I experienced a wide variety of road conditions, traffic and weather, from drizzling rain in the 50’s on deserted two lane mountain roads to scorching sun and triple digit temps on bumper-to-bumper freeways. Once I got in tune with the CVO Limited’s handling and performance, I felt like I could ride forever. The seating position is classic cruiser, with footboards slightly ahead of the seat (and highway pegs mounted on the front engine guards). There’s plenty of room to move around on the comfortable seat, and the bars were at a comfortable height for me (I’m 6’2” tall). I would probably remove the heel portion of the heel/toe shifter on the bike’s left side to make a little more room for my size 14 boot, but most riders won’t have that problem.

The 110” engine is rated to produce 115 peak lb-ft of torque at 3,750 rpm. Harley doesn’t quote horsepower figures. Estimated fuel economy is 41 mpg – I saw about 38 mpg on my 1,500-mile test ride, and I wasn’t at all disappointed in the range I got from the 6-gallon tank. Torque gets delivered through a smooth 6-speed transmission with electronic cruise control. Clutch effort is reasonable – not the gorilla grip of old, but not the two-fingered pull of a sportbike, either. I always felt like I had the passing power I needed, even in top gear, and the bike pulled like a locomotive on inclines and mountain roads. There’s the familiar V-Twin vibration at low revs, smoothing out at cruising speeds and upon acceleration. The rubber-mounted engine is well-isolated from the rider, and I never experienced any numbness or discomfort, even after long days in the saddle.

The CVO Limited is not a sport tourer, make no mistake. Tight turns and twisty roads must be ridden at a moderate pace, but the handling is a reasonable compromise for the bike’s comfort and capacity. I rode on some of my favorite roads, including Highway 1 through Big Sur, Skyline Boulevard in the Santa Cruz Mountains and Tioga Pass in the Sierra Nevadas, and I thoroughly enjoyed the experience.

The 2014 FLHTKSE CVO Limited lists at $38,999, and that includes just about every accessory you can think of. There will be riders who want louder, free-flowing pipes and Stage 3 performance upgrades – but the bike doesn’t need them.

Ordinary humans will probably be content with the standard Electra Glide Ultra Limited, which comes with the Twin-Cooled Twin Cam 103 engine and the Project Rushmore enhancements, starting at $25,899. There’s that other American motorcycle company, too, and they’ll gladly sell you a 15th Anniversary Victory Cross Country Tour for $29,999. Other fully-dressed heavyweight touring bikes include the Honda Gold Wing ($23,990) and BMW K 1600 GTL ($27,145) – two entirely different ways to hit the road.

I started out this review by dismissing the Harley haters from the page. If you’re still here, you’re still scoffing, and that’s fine. The great thing about motorcycles is great diversity; a bike for every rider and every style of riding. If you’re a Harley devotee, the CVO Limited is a true halo motorcycle, representing the best of everything that the Motor Company has to offer. At $38,999, it is an investment in your commitment to the brand, and it will repay you with a great touring ride.