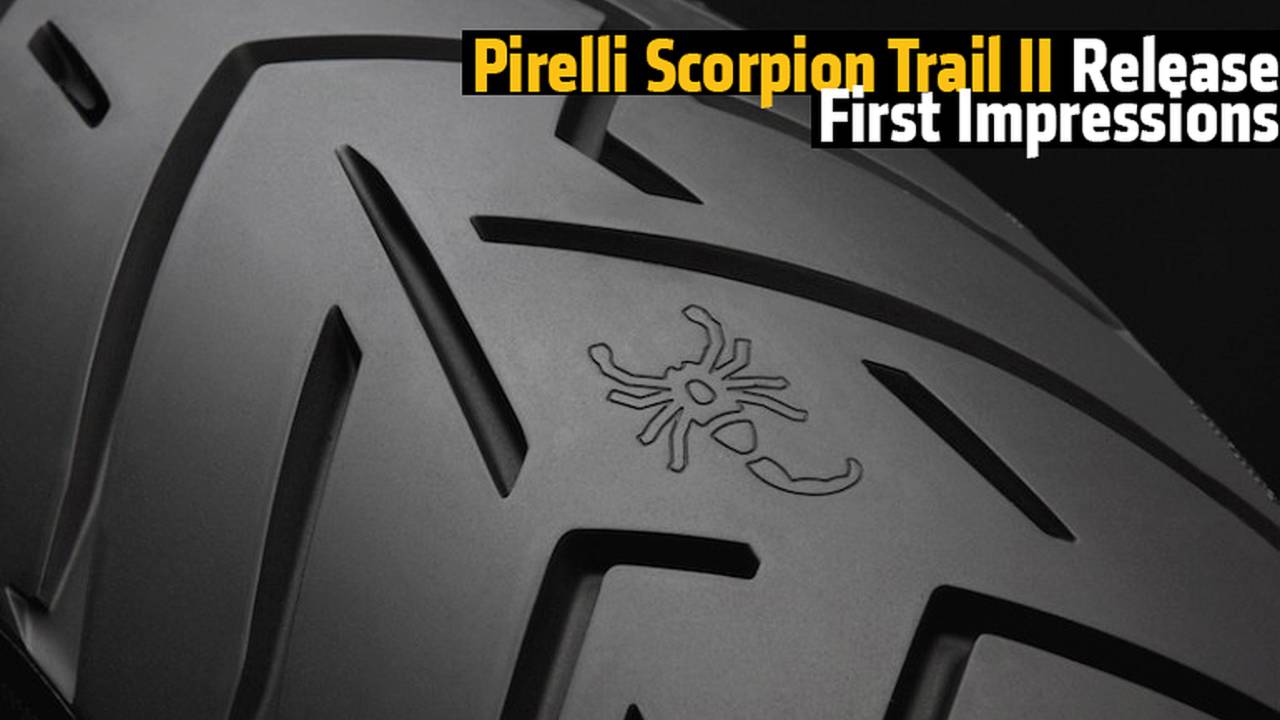 The new Scorpion Trail II from Pirelli is released and we rode it.

Yep! This is a tire press release. I know, it's exciting stuff. Everyone loves to read a good tire release sitting in their easy chair wearing a smoking jacket, a pipe, and a nice single malt scotch. Yours truly is currently writing this while suffering from allergies and sipping a nice whiskey and ginger. Let's settle in and see what makes this tire worth reading about.

The new Scorpion Trail II is the synthesis of joining two worlds: the sphere of off road competition and the road trip. Designed for the most demanding motorcyclists, it features key points of excellence, high mileage, consistency of performance for its entire tire life, and top notch wet behavior.

Scorpion Trail II is the new Pirelli tire specifically designed to meet the most demanding expectations of this market. I has an aggressive tread pattern that is supported by strong technological innovations—giving it good stability at high speeds, dirt traction, handling, comfort, and grip in all riding conditions (source: Pirelli).

That's all fine and fancy, but it really tells you nothing about the tire. Press releases are a simplistic tool to impart very technical knowledge to the masses. We are not the masses, we are the educated and unwashed riders of RideApart and we demand more. So more we shall have.

The Scorpion Trail II was designed with three main goals: high mileage, sporty handling, and wet weather handling. Normally if you draw a triangle and put one item at the corners, the more you move towards a point the more you give up of the other two. (It's called a project management triangle, but it works here as well.)

In the case of Pirelli, when they designed the new tire, they changed the parameters. Normally, in the middle, you have a circle and it would be quality. The further towards each tip, the more quality suffers. Instead of using the normal approach to mixing the silica and polymers and tweaking the compound to get things where you want them, they changed the process. The ingredients are the same but how they are prepared is different. It allows for a tire that grows in three directions on our triangle above instead of two.

READ MORE: Moto Camping – It’s Worth Looking For a Room With a View

*Queue more tech discussions*-- They took what they knew from the Scorpion Trail and the Angel GT and combined them. The grooving changed to a balance between the two DNA donor tires. They added breaks in the long longitudinal grooves to improve water run off. It seems counter intuitive to create a smaller groove until you think of the tire in operation. Those grooves are being compressed and by doing that, it removes more water.

In the original Scorpion Trail, when those long grooves crossed the lateral groove under load, the tire actually closed the gap where water would escape—effectively giving less traction and more chance to hydroplane. If you look at the close up you can see none of the grooves overlap. The new Scorpion Trail II has a seven percent larger contact patch that is shorter front to back and wider across the tire's face. This equates to less wear because there is less slip of the tire as it rolls down the road. Slip is when the tire breaks in and out of full traction on the road surface. If you minimize that surface area and make it wider, you reduce the amount of surface area slip occurs, which results in better mileage.

What does all of this mean?

Nothing yet. This isn't different from what many manufacturers do with a new tire. They all make design changes and compromises. What Pirelli did was go back to the process of making the tire. The recipe was already good, but you can make it better with process. The Pirelli representative put it the best: "You can have all the ingredients for a pizza, but if you don't know how they go together you cannot make pizza." Just like we all cook steak, but when you eat a cooked steak prepared by a top chef, you can tell they use a different process. The chart below shows where the new tire improved on the original.

What did they change?

Previously when you mixed the polymers, silica, and nano materials, that was it. You used the mix until you mixed the next batch. (Simplistic explanation, but we don't have days to delve into the nuances.) They now use a continuous mixing process that involves a controlled chemical reaction to create the mix constantly. This creates a more uniform tire and affords better control over the final quality. With all of these new processes they were able to improve the tire construction, adding lateral strength—meaning the compound wasn't compromised in order to get good mileage. Most tires give up wear for traction and vice versa. With the new mixing process, Pirelli didn't have to choose between the two.

We rode through the hills and valleys in upstate NY in April when it snowed. We got chased out of a state park by the park police and generally had a good time. Thank you to Pirelli for putting up with us. I was also fortunate to ride a brand new (first of two in the USA) Multi Strada, and it proved to be a very capable bike to run these tires on (I also rode a new BMW GS as seen below.) The weather was below 35 degrees for most of the time and the tires heated up quickly, offered maximum traction, and didn't mind some gravel in the road. Beyond that, I can't say much. We didn't get enough seat time to really evaluate the tire. We do have a set coming for a long term test so we will definitely follow up on this article in a few months.