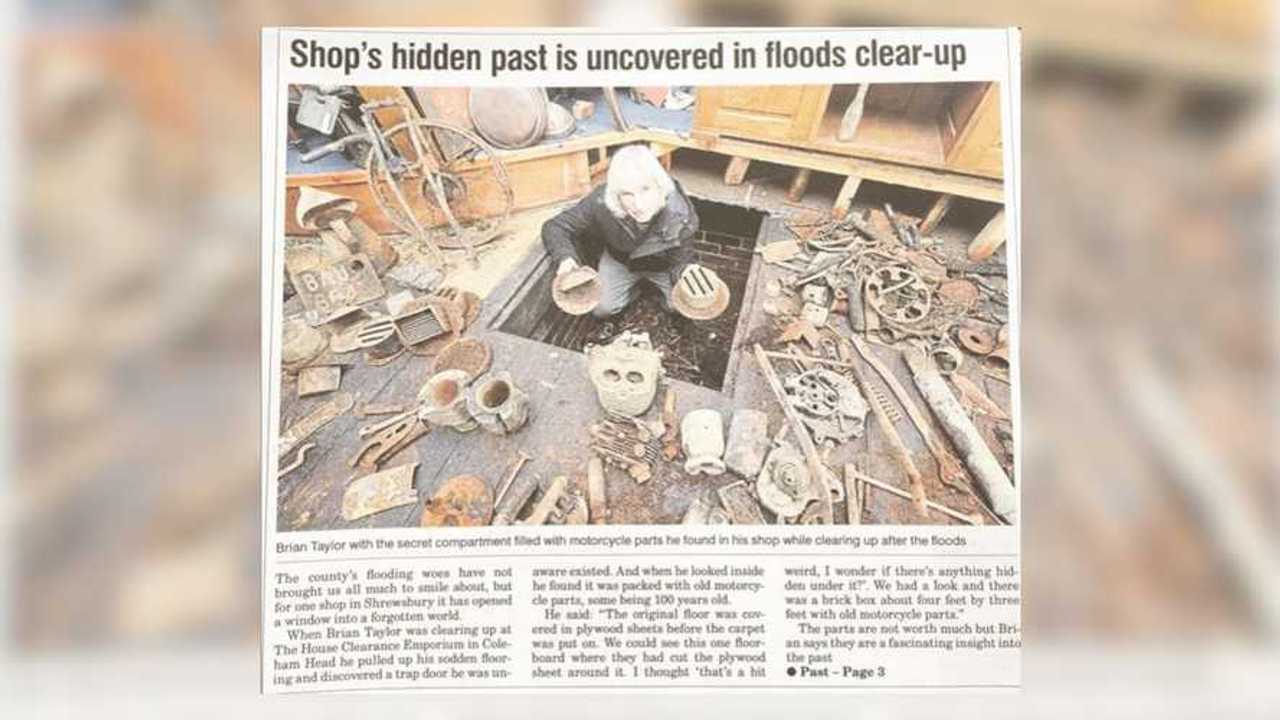 British motorcycle fans everywhere just got a tingle and they don't know why.

Significant floods have made life miserable for residents of Shropshire, UK and the surrounding area in late February 2020. Some residents had to evacuate after some of the worst flooding seen in over 20 years hit the area. The River Severn, which cuts through Shropshire, overflowed its banks, and homes and businesses alike are still cleaning up. You might not think this is a motorcycle story, but I assure you that it is.

Flooding leads to cleanup, which frequently leads to pulling up sodden carpets and flooring—and discovering what fascinating secrets they may have hidden for a century or more. While the antiques shop called House Clearance Emporium isn’t a parking structure, what its owners found buried beneath its floors could possibly be described as British motorcycling royalty.

Shop owner Brian Taylor said it started with the carpet. After pulling it up, he and shop worker Joe Priestley found a wooden floor underneath—and a trapdoor. Beneath the trapdoor was a brick box that measured about three feet by four feet. What was in the box? Instead of something horrifying, they made the wonderful discovery of a whole bunch of extremely old British motorcycle parts. We’re talking stuff like J.A. Prestwich—better known as JAP—crankcases and a Rudge four-valve cylinder head. It’s truly not stuff you see every day.

If you want to see a bunch of parts photos, head over to the Shropshire Star to see the treasure trove the flood helped to reveal. It’s unclear exactly what Taylor plans to do with this British bike bounty, or when. If you’re a vintage British motorcycle enthusiast, you might want to follow the shop on its Facebook and Instagram to keep an eye out for more information about when and where these parts might be available for sale.

Is this the best possible thing to come out of having your home or business flooded? I mean, we might be a tiny bit biased here, but we here at RideApart are going to say it definitely is.