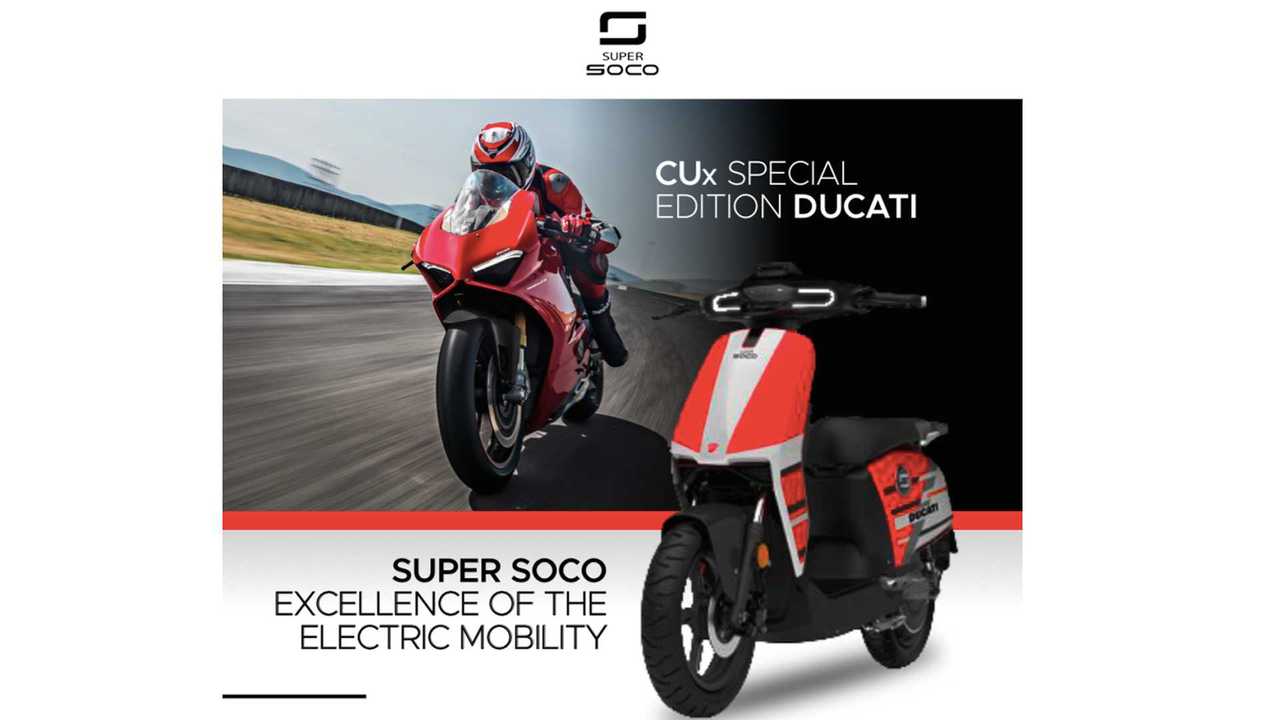 We heard whispers about a Ducati scooter project…we didn’t think it’d be built in Nanjing.

Back in January, Ducati CEO Claudio Domenicali remarked, “the future is electric and we’re not far from beginning production of the series”. With seemingly every manufacturer getting in on the EV trade, we took Claudio’s statement very seriously. Perhaps too seriously, since we finally got word of Ducati's electric project and it isn't quite what we expected. Rather than developing its own electric model, or even its own electric powertrain, the Italian firm has instead opted to go into business with Vmoto, a Chinese purveyor of electric bikes and scooters and the parent company of Super Soco.

Instead of collaborating on an e-scoot, Vmoto jazzed up its existing CUx electric scooter, slapped on Ducati logos and branding, and called it the “CUx Special Edition Ducati”. At its heart is a 60V/32Ah lithium battery paired with a 2,700-watt Bosch motor. The battery—which has a 3.5-hour “fast charge” time—provides a 46-mile (or 75km) range and can be removed for charging. Vmoto claims that the battery uses the same technology as found in the Tesla Model S.

Other features on the CUx SED include multiple ride modes, remote keys that also unlock the under-seat storage compartment, LED lighting, built-in (forward-facing) camera, and assorted other high-tech bits. The scooter is being touted as a “luxury version” of the CUx, which will in turn command a “luxury price”. While there’s no word on performance specs, it appears the SED-spec won’t deviate from the existing 2019 CUx’s powertrain, which means a 3.75hp lump capable of getting up to 29mph (or 45km/h).

While Vmoto is responsible for building the Italian-flavored scoots, Ducati is taking care of the marketing and branding of its “first electric (sorta) model”. The electric two-wheelers will be sold via Vmoto’s existing network of retailers; so don’t expect to see these on Ducati showroom floors. On top of selling product, it appears Vmoto also aims to bolster its presence in the EU market in general.

It is worth mentioning that the Volkswagen Group—Ducati’s parent company—has the goal of bringing all of its properties into the EV game by 2030 under its “Roadmap E Program”. So an actual electric Ducati is already an inevitability within the next decade, though based on the growing popularity of the two-wheeled EV sector, the Bologna-based brand will almost certainly tap into said market within the next couple model years. In fact I wouldn’t be surprised to see an electric Ducati concept come EICMA.