How the FIM and TTXGP can fix electric motorcycle racing 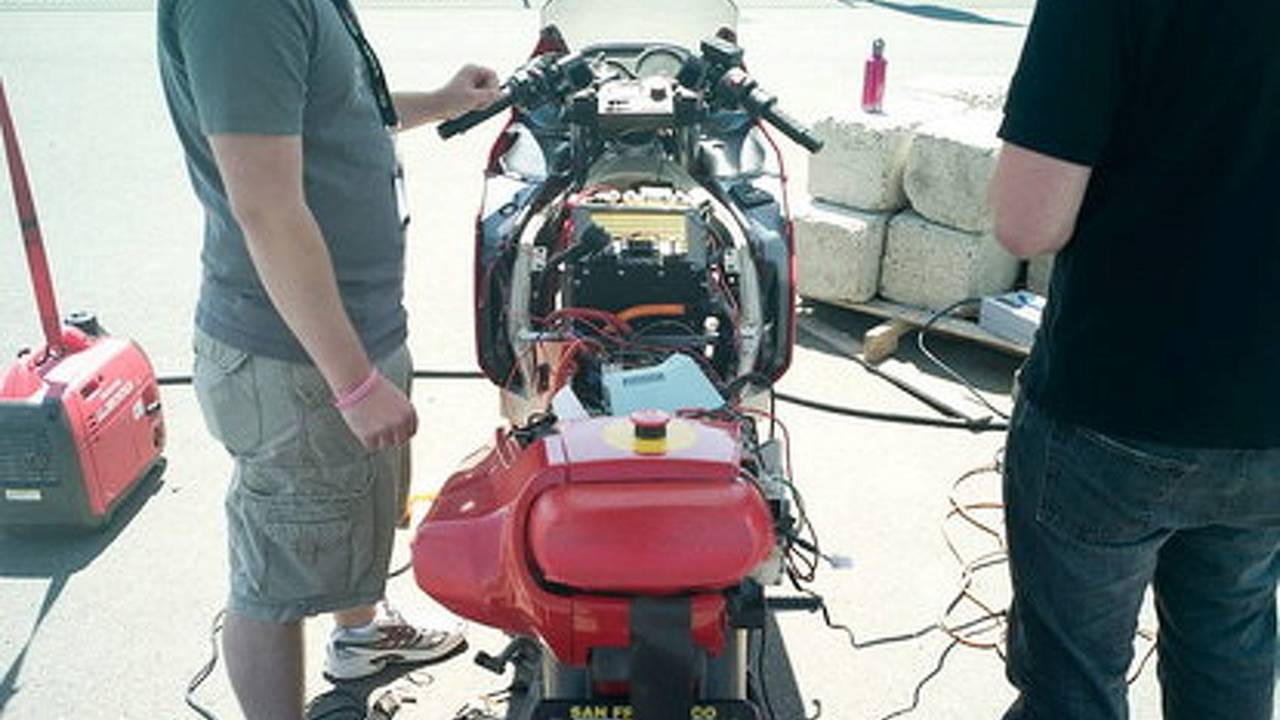 Photo: Grant Ray"Racing improves the breed." That was Azhar Hussain's mantra when he launched TTXGP and the idea of electric motorcycle racing a couple of years ago. He's right, of course. If we want the best possible electric street bikes as soon as possible, the racetrack is the best place to breed them. But we also need the best possible breeding ground - one premier racing series. One. TTXGP a...

"Racing improves the breed." That was Azhar Hussain's mantra when he launched TTXGP and the idea of electric motorcycle racing a couple of years ago. He's right, of course. If we want the best possible electric street bikes as soon as possible, the racetrack is the best place to breed them. But we also need the best possible breeding ground - one premier racing series. One. TTXGP and FIM need to work out their differences and create this series if we're to believe it when they say they want what's best for the development of electric motorcycles.

After Azhar Hussain and TTXGP kick-started the whole electric racing scene with the Isle of Man TTXGP last summer, they immediately sat down with FIM to create the world's first FIM-sanctioned racing series for electric motorcycles. Almost as immediately, and for partly unknown reasons, it fell apart and they both decided to have a go at it alone. So instead of an FIM-sanctioned TTXGP series we got the FIM e-Power series and the TTXGP series. Halfway through the 2010 season, they've proved they made a mistake. They're both capable of organising electric motorcycle racing, but compared to what they could have done together, the current series are both crap. Despite all their efforts, FIM haven't managed to attract more than a handful of teams in their European rounds of e-Power. That nearly doubled at their Laguna Seca round a couple of weeks ago, but it's probably back to a handful of teams for the last rounds of the season in Europe. TTXGP have had more teams in their races, both in the UK and US, but suffer from a lack of high profile events. The only thing they've done really well is to polarise the tiny electric motorcycle racing community to the point of "you're either with us or against us."

TTXGP's long term plan for survival outside of the motorcycle racing establishment seems to be to try to out-expand FIM, probably in constant danger of over-stretching (the planned TTXGP Italy later this year could be the first victim of this, but even so, there are plans for more TTXGP-series next year). FIM's strategy has been to try to out-pocket TTXGP by paying teams to race in their series and by setting up races on "TTXGP dates". I don't know how deep their pockets are, but I'm pretty sure the more or less constantly out of money national organizations that make up FIM will start asking questions about it sooner or later. Add some personal pride and some FIM politics to this and what you get is certainly not the best breeding ground for electric motorcycles.

It's no problem finding people willing to tell you who's to blame for this mess (off the record, of course), but - as always - the truth is more shades of gray than black and white. There's been some bad decisions on both sides, and electric racing is so small, personal likes and dislikes plays a bigger role than you'd expect. It really doesn't matter who's to blame anyway. What matters is that separate FIM and TTXGP series are detrimental to electric motorcycle racing and the development of electric street bikes. Sponsors are waiting to see what will be the best series and mainstream media - and I'm talking mainstream as in "outside of the hardcore EV-blogging community" - couldn't care less about half empty grids on half empty tracks. In short: FIM and TTXGP are wasting energy, resources, opportunities and synergy effects of working together. If you need examples, look at the ridiculousness of FIM and TTXGP running half empty races in Italy at the same time, on tracks just a few miles apart.

They've both said on several occasions they would consider working with each other again. If they are in this for the best of electric motorcycles and not just in self interest, it's time to try again. A lot has happened since they split company - hopefully enough to make both parties more willing to look for possibilities rather than differences. FIM knows that TTXGP have a good foothold by now and won't disappear anytime soon. After having a go themselves they've probably also learned that it takes lot more to nurture an electric racing series in its infancy than providing the venues and paying anyone willing to show up and race with whatever they've got to race with. They've also found out that FIM e-Power will not automatically be the premier electric racing series simply because it's an FIM series. Azhar Hussain and TTXGP have probably realised by now that the FIM means business with their engagement in electric motorcycle racing. If they want to take TTXGP one step further it's with FIM, not against FIM. Building a whole new racing concept is really, really hard work. Doing it while fighting FIM will probably prove impossible in the long run.

In simple terms: FIM have money, power and organisation. TTXGP have enthusiasm and a wider view than just racing - essential to anyone who wants to see the best possible electric street bikes as soon as possible. If they're working for the benefit of all electric motorcycles, as they claim to do, they need to work out some sort of sanctioner/promotor deal, with TTXGP running an FIM-sanctioned series from next season - the best possible breeding ground for electric motorcycles. If they start working on it now, they can use the remaining races of the 2010 season to find the best way forward. They'd also get the instant benefit of more teams on the grid in the remaining races of both series, and they could turn the TTXGP "World Final" at Albacete into a higher profile proper World Championship, including the best e-Power teams. That would give an otherwise lukewarm first season of electric motorcycle racing an ending to look forward to.