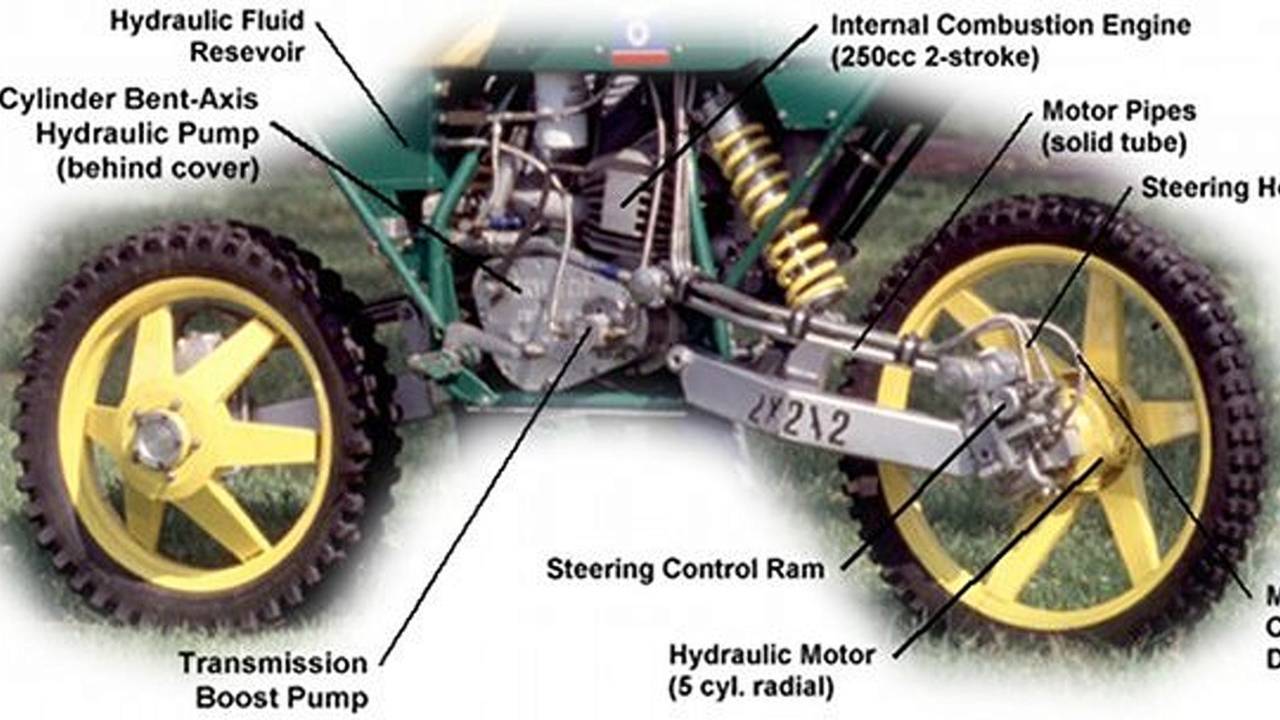 What would happen if a motorcycle was developed on a different planet, free form the influence and lineage of terrestrial motorcycles? It might end up looking something like this Drysdale 2x2x2; other than an engine located between two round wheels, it shares virtually no other similarities with terrestrial motorcycles. “2x2x2” stands for two-wheel steering and two-wheel drive, but there’s a...

What would happen if a motorcycle was developed on a different planet, free form the influence and lineage of terrestrial motorcycles? It might end up looking something like this Drysdale 2x2x2; other than an engine located between two round wheels, it shares virtually no other similarities with terrestrial motorcycles. “2x2x2” stands for two-wheel steering and two-wheel drive, but there’s also hydraulic drive, hydraulic steering and even hydraulic braking plus single-sided swingarms front and rear.

The 2x2x2 comes from the mind of Australian engineer Ian Drysdale, who you may have heard of thanks to the Drysdale V8, and was inspired by an hydraulic drive International Harvester tractor.

It works by using a 250cc two-stroke to power a positive displacement hydraulic pump rather than a gearbox. That pump pressurizes oil to 4,500psi, then direct that flow to hydraulic motors located in each wheel hub where the high pressure flow is converted to rotation. Because oil is incompressible, a piston in the pump is effectively directly connected to a piston in the motor through a solid, yet flexible connection. Speed is controlled by the flow rate of the pump.

Using a pressure reducing valve, torque can be split front to rear while a dividing valve can prevent either wheel from spinning, acting as a brake. The Drysdale uses a parallel flow setup where the flow is split to each wheel downstream of the pump.

Without the pump spinning, the hydraulic fluid can’t move through the system, meaning the bike can’t be pushed around while the engine is off, the wheels simply won’t spin. It’s also impossible to roll the bike backwards.

Benefits of this arrangement reportedly eliminate wheelspin, even over low-friction surfaces such as sand or mud. Adding rear-wheel steering to the 2WD also makes it almost impossible to slide the rear, meaning the 2x2x2 is prone to highsides, once again even on very slippery terrain.

Almost every aspect of the 2x2x2 is completely bespoke. The engine, for example, is based on a Maico unit, yet uses custom billet aluminum crankcases and covers. It operates in a lower state of tune. There’s a number of other weird solutions going on here, such as two exhausts, with one acting only as a resonance chamber and the other flowing gas. Drive comes off the crank to the pump through a custom-made gear system, eliminating the Maico’s chain primary drive. The piston-style pump the engine drives is from a jet fighter plane.

The hydralic motors in each wheel are also piston-types, employing five pistons arrayed radially. As oil flows into the area above each, the piston is forced down, applying pressure to an eccentric crankshaft, spinning both the motor and wheel.

That high-pressure drive oil is transmitted through the two solid tubes on top of each swingarm. the smaller hoses flow low-pressure steering oil, operating a hydralic ram which “steers” the wheels. Turning the handlebars operates an hydraulic master cylinder. A delay mechanism separates front and rear steering, with five degrees of handlebar input necessary before the rear begins to turn.

A valve in the return oil path can be closed, which in turn prevents the rear wheel from spinning. It’s this which acts as a “brake.” Because oil pressure built up during this closure period can be stored in an accumulator, the 2x2x2 is effectively operating a kinetic energy recovery system. When acceleration is again needed, that accumulated pressure can be released, providing drive. Unfortunately pressure built up by the system was so high that the seals were unable to contain it.

Ian describes riding the 2x2x2 as “Like sex with a condom — similar to normal but not the same!”

There’s a conventional throttle to control speed, but, as a safety mechanism, a pedal on the bike’s left must be held down to maintain drive. A foot pedal on the right operates that oil-return valve, acting as the brake. Two-wheel steering meant that the full 45 degrees of steering lock result in 22 degrees of angle at each wheel, creating a radically reduced turning radius when compared to conventional steering. During the initial period of front-wheel-only steering, you have to turn the bars twice the usual amount to achieve the same steering input; after that five degrees steering feels normal, then through the last ten degrees the steering quickens, delivering twice the steering for the same input.