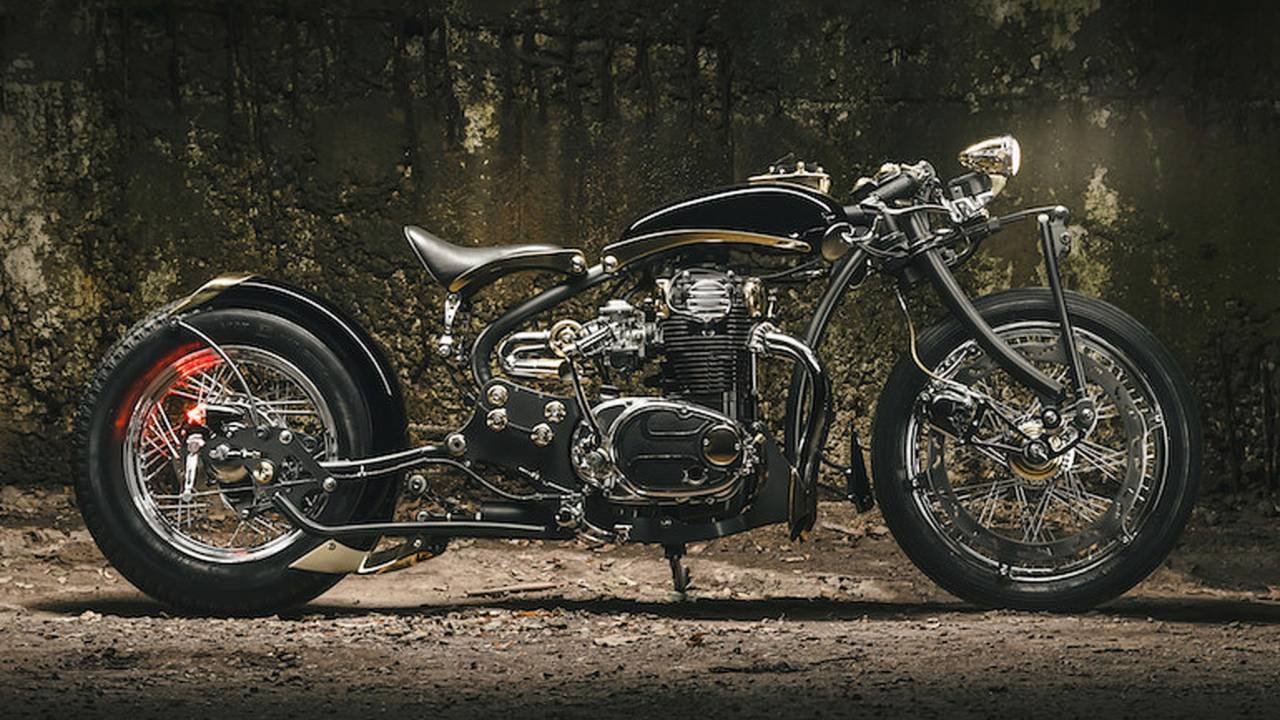 This week Bulgaria’s Galaxy Custom gives us a unique mix of board track racer and bobber, with a dash of steam-punk flavor for good measure.

I’m not normally a huge fan of bobbers, but the radical XS650-based Duke from Galaxy Custom’s is far from your average bob-job. The intense five-or-so-year build includes a ridiculous number of individually designed and machined parts, only rivaled by the likes of Max Hazan. All that remains of the Yamaha donor is the engine, rims, and rear brake. The rest of the Duke's components are bespoke, supplemented with by a couple high-end aftermarket goodies. Meet this week’s Bike of the Week; Galaxy Custom’s “Duke”.

So, who is Galaxy Customs?

“We are a small group of gasoline lovers that started a workshop in 2011 in Vratsa—a small town in Bulgaria. The creator and lead engineer of the workshop is Angel Valkov. Angel Kotov is our metal guy and a great welder, and Evgeni Veselinov does our electronics and engine repairs,” explained Ivailo Trendafilov, Galaxy Custom’s lead designer.

The Bulgarian outfit is actually based inside of a high-end furniture shop, the company's primary bread and butter. While the shop’s swanky furniture takes priority over its bikes, you’d never know it from looking at Galaxy’s one-off builds.

“Right from the beginning, we had been planning something like this bobber for a Yamaha XS. The reason is simple; the bike has an exceptionally beautiful engine that owes much to the timeless British classics,” stated Trendafilov. This is in reference to the fact that the XS650 is more or less a Japanese take on the parallel twins coming out of the UK in the late 1960’s.

XS650 HISTORY: The Iwata Bonneville - A Short History of the Yamaha XS-1

Upon its release in 1968, the SOHC, unit construction engine became an instant success both at home and abroad. The 650 remained in production for more than 15 years before the plug was finally pulled in ’85. Making the XS650 even more popular in the states was the fact race legend Kenny Roberts won the 1974 A.M.A. Grand National Championship aboard the parallel twin, famously beating out Harley in the process.

The Duke project started out as a 1982 XS650 that the Galaxy crew imported from the U.S. The Bulgarian operation went into building the Duke with the mindset that they wanted to create something, “truly different and unique”. Once the bike was safely in Bulgaria, Trendafilov got to work generating 3D models of the various parts the ambitious build required. These include the chassis, swingarm, forks, tank, and fenders, and dozens of other small, one-off pieces. According to Trendafilov, the random knickknacks made up the lion’s share of the custom’s time and labor.

“Designing and creating every single part of every component and having it all work perfectly was almost impossible. But with five-years to spare, we had the time to make it happen,” said the shop’s chief designer.

After a design was agreed upon, a one-off chassis was crafted. The shop then designed a custom front-end that it describes as, “our version of a trailing link system”. All all wires and cables are routed internally, resulting in a really clean cockpit complete with bar-end brake and clutch levers, braided leather grips, and a Motogadget speedo unit. The rear suspension is made up of shocks off a Harley Softail that have been married to the build’s unorthodox homemade swing-arm.

In addition to the dampening provided by the dual Softail shocks, the Duke also boasts a saddle suspension system comprised of a pair of leaf springs and a hinge. While the Duke retains the XS’s factory rear drum unit, braking duties up front are now performed by a Zero Torsional Load perimeter front disc brake like those used by Buell.

As fascinating as the bobber looks, the team from Galaxy Custom claims that the machine was built with a major importance placed on ridability, not just aesthetics.

“We focused on the fact that whatever the end result, it had to be fully functional,” remarked Trendafilov.

The Duke's inlet and exhaust pipes are a major highlight on the custom. Made from stainless steel, they are finished off with chrome and gold plating, a visual-theme that can be seen throughout the bike.

“All the parts were made entirely in the workshop, using brass, aluminum, stainless steel, and sheet metal, of course,” said Trendafilov.

There are just so many small noteworthy elements on this bike that together create a cohesive product. While this project does straddle a weird line between board track racer and bobber—with a little steam-punk flavor tossed in for fun—it’s hard to deny that it is an exceptionally unique custom motorcycle that’s been wonderfully executed, earning its place as this week’s Bike of the Week.

Got a bike you thin deserves to be RideApart’s next Bike of the Week? Drop us a line at info@rideapart.com