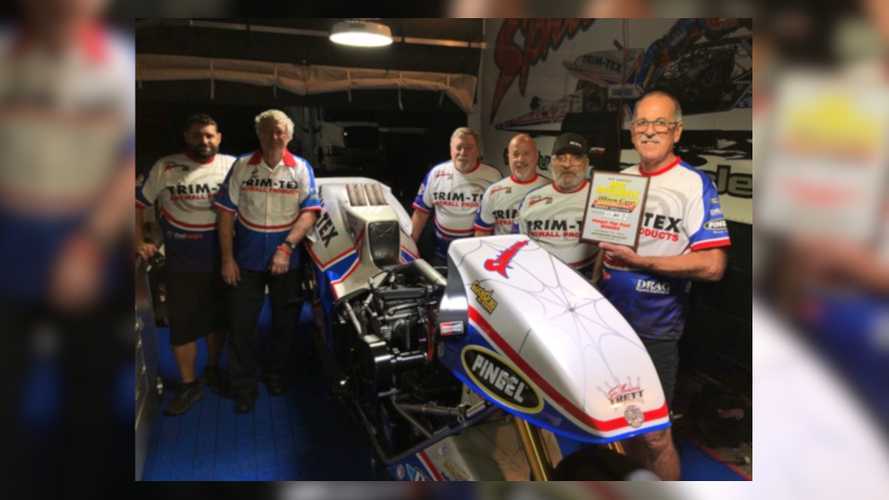 You might think that after a career spanning over 40 years, Larry “Spiderman” McBride would be out of records to break. You might, but you’d be wrong. Over the final weekend of October 2019, McBride set records for both the quickest and the fastest drag bike passes of all time at the Man Cup MTC Nationals at Rockingham Dragway in North Carolina.

Can A Harley Take The Turbo Busa’s Drag Strip Throne?

CycleDrag reports that McBride did a 5.607 quarter mile, reaching a speed of 263mph in his final round victory over Dave Vantine. He’d had good runs in both practice and qualifying, but broke a transmission during the open round of eliminations. Luckily, his luck held out when it counted.

“On the shutoff is when you know you are going really fast,” McBride told CycleDrag. “When I activated the parachute I noticed how hard it hit. I never felt it hit that hard. We are treading in waters where people have never been.”

There’s only one more weekend in the 2019 season, from November 21 through 24 at South Georgia Motorsports Park. McBride currently has the points lead in the championship, and may just win his 20th world championship title at the biggest race of the year.

You can watch CycleDrag’s video of the record-setting run here:

Also, you can attend the 2019 Man Cup World Finals weekend at SGMP in Adel, Georgia if you’ll be in the area.

It’s an impressive reminder that even when you’re at the top of your game, you can always get better if you work at it. That obsession and drive is what makes racers like McBride just keep getting out there and getting after that ever-elusive goal, and beating themselves even if there’s no one else around to beat.