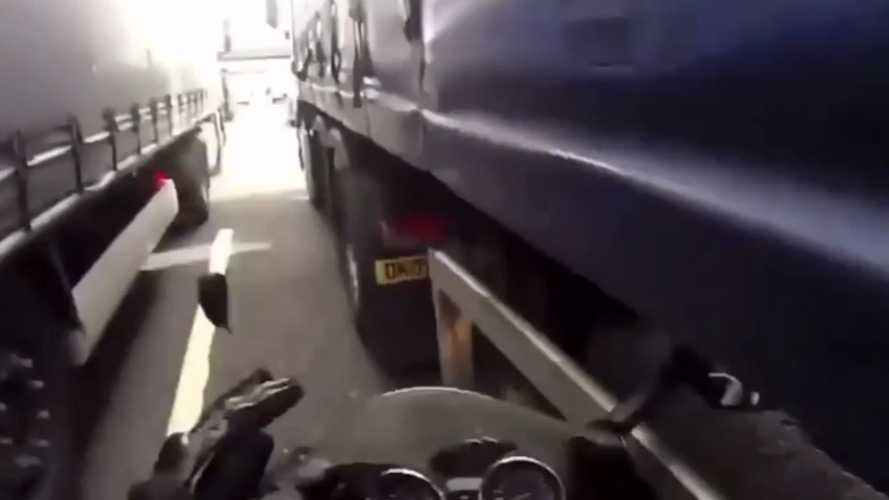 I was wondering about something. You hear everywhere about how lane splitting is supposed to be safer for riders, but only California has legalized it. Pardon my French, but why the heck aren’t more states legalizing it?

If you can find a straight answer, Pak, let us know. Thanks for sending us your question, have a good one. Cheers.

On a more serious note, your question is tricky and not being politicians or lawyers ourselves, it’s hard to come up with a clear answer. First off, as I always do when brushing on the subject of lane anything, I like to remind you folks of the difference between lane splitting and lane filtering. Splitting is cruising on the white line on the highway while other vehicles are in motion while filtering means making your way through rows of stopped vehicles to get at the front of the pack, for example at a stop light.

Since the beginning of the year, a number of states have opened or reopened the discussion about legalizing a lane-something maneuver (shoulder surfing, lane splitting, lane filtering). Currently, California is the only state that formally allows lane splitting. A few months ago, Utah became the first state to legalize lane filtering on paper. Other states including Oregon, Texas, and Maryland are also in talks of legalizing one of the two maneuvers. Some reports claim the Oregon bill fell through, something we have yet to confirm.

While in broad daylight, nobody will admit to it, I suspect there are some behind-the-scenes shenanigans that keep the balance tipped on the side of keeping lane splitting illegal. Reasons as crass as money have been invoked by some Internet users—injured motorcyclists are most likely to have hefty medical bills right?

I don’t deny that there’s likely some serious lobbying involved (or else why would the opinions of emergency crews, health specialists, and law officers in favor of lane splitting be so easily dismissed?). I don’t want to get too political because it’s not my field of expertise, and I’ll probably sound extremely naive saying this, but I like to believe that the base of it all is a lack of understanding. The fact that people who have never been on a motorcycle and don’t understand the reality of it get to make these decisions is probably the main reason it’s not more widely spread in the US.

There’s also possibly a small (or big) percentage of these people who believe lane splitting is dangerous (again, from a lack of understanding). The notion that being sandwiched between two cars is actually more dangerous than lane splitting can be hard to grasp.

Another small (or big) percentage likely perceives lane splitting as a “privilege” rather than a safety measure. They possibly think it’s unfair for motorcyclists to receive special treatment, which on the surface, it kind of is. But these people have also never been rear-ended on a motorcycle. So while it does look like a special privilege, it’s also one that can save a life.

I’m not sure whether I’ve answered your question or not because ultimately, it’s hard to point to a single factor that prevents lane splitting from becoming the norm in the United States. One way to help change things is to reach out to your local representative in support of lane splitting (or filtering) legalization.