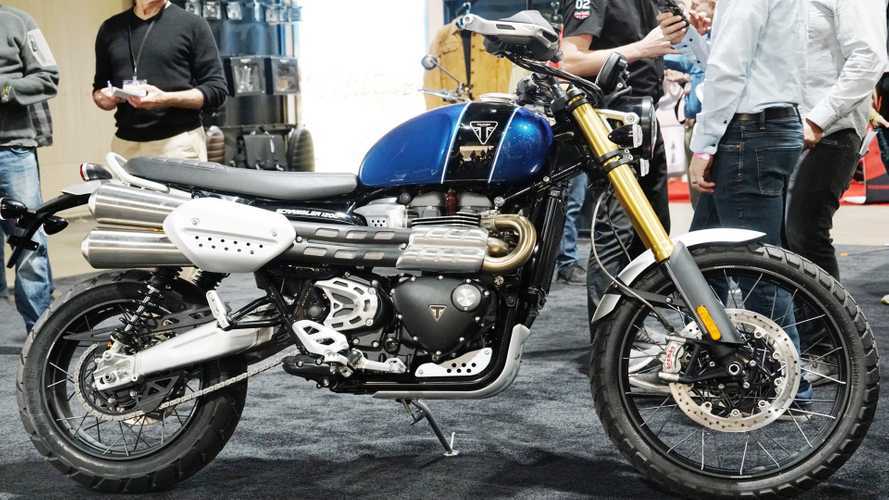 This much style and capability doesn't come cheap.

We had been promised that US market pricing for the Triumph Scrambler XC and XE would be officially announced on Friday December 14. All of us at the RideApart world headquarters (like Airwolf, inside a hollowed out rocky spire in the desert) were literally hitting F5 and watching the clock, before giving up when Miller Time struck at 5pm. It seems Triumph was too busy impressing motojournalists in Portugal at the official introduction ride to update their website, and the journalists never got around to posting or answering emails. Thankfully, one of them took a break from his galão at the lanche da manhã to pass along the information. The street-oriented Scrambler 1200 XC has an MSRP of $14,000, while the more dirt capable Scrambler 1200 XE will retail for $15,400.

Pimp Your Scrambler With These Triumph Inspiration Kits

With no other bike on the market combining the stylish retro looks of the Bonneville with actual off-road abilities, it is hard to say how the Triumph compares. For reference, the Ducati Scrambler 1100 starts at $12,995, while adventure models like the Yamaha Super Ténéré and a Honda Africa Twin respectively retail for $15,099 and $13,599. In the retro branch, the style-first BMW R nineT Scrambler has a starting price of $12,995. Obviously, none quite compares to the new Triumph Scrambler, but pricing for the new 1200 seems to rank in the range.

Of course, if you'd like to pay more, Triumph has a catalog full of accessories and upgrades, not to mention casual clothing, to add to your bill. Even before upgrades and add-ons you are getting Brembo brakes, a Showa upside down fork, and Öhlins shocks in the deal, the XE gives you a lift kit and more aggressive tires in the bargain. Both feature the engine borrowed from the Thruxton with 89 horsepower, and more than 80 lb-ft of torque.