In early September, 2021, Moto Guzzi unveiled its sweeping new plans to redesign and expand its Mandello del Lario factory, museum, and public space. The company is celebrating its 100th anniversary throughout the year, so that’s when it also took the covers off its stunning new Moto Guzzi V100 Mandello for the first time, as well. While fans could take a good look at it, further details were held back until—you guessed it—EICMA 2021.

Therefore, it should come as no surprise that all brand members of the Piaggio Group—that is, Moto Guzzi, Aprilia, Vespa, and Piaggio—have also confirmed that they’ll be attending EICMA 2021 this November. While things continue to be different in our world since the pandemic took hold, all participants plan to bring their 2022 ranges, and more than a few probably have some surprises up their sleeves, as well. 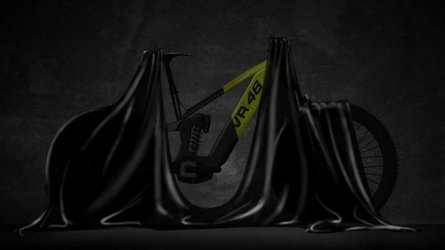 Valentino Rossi Gets Into E-Bike Business With VR46 MTB Range

EICMA Adopts New Logo And Slogan Ahead Of November 2021 Event

In 2020, EICMA was, like most things, either canceled or postponed depending on who’s doing the talking. The official language said that the show would be postponed until 2021—which effectively is just a gentler way to say that last year’s event was canceled. After all, the “c” word comes with a lot of finality attached. Last year was so rough that it’s easy to understand why some might frame it in such a way as to cushion the blow—even if it’s a bit imprecise. 2020 was an extremely difficult year.

That makes EICMA 2021 feel all the more important and special, because it represents a comeback—both for Italy, and for the motorcycle industry as a whole. While it’s true that motorcycle OEMs have mostly seen lots of positive sales numbers due to everyone in the world wanting to ride by themselves at once, it’s still been an exceedingly strange time. There’s much more to life than simple sales numbers—especially since plenty of people in the industry are riders themselves.