Spotted: KTM 390 Duke Won’t Be Left Out Of Upcoming Update

On April 14, 2021, we got a sneak peek at the possible changes in store for the KTM 125 Duke and 250 Duke. Based on the photos, we assumed that the two naked bikes were moving out from the 390 Duke’s shadow by adopting a new swingarm, redesigned trellis frames, and reconfigured subframes. After spotting a 390 test mule on European roads, it looks like those changes are in lockstep with the Austrian brand’s upcoming update.

Similar to its eighth-liter and quarter-liter counterparts, the 390 Duke looks like it will earn a brand-new swingarm with a side-mounted monoshock. Photos also suggest that the new 390 could share the same simplified trellis frame and composite subframe spotted on the 250 Duke test bike. The aggressive mirrors found on the 1290 Super Duke replace the 390’s current units, just like the 250 test mule.

The five-spoke cast wheels seen on the 250 Duke also make an appearance on the 390 Duke, potentially replacing the 10-spoke wheelset found on the 2020 model. Unfortunately, we don’t know what KTM has in store for the naked bike’s final exhaust system, as the silencer was left off the underslung catalytic converter. Unlike its smaller sibling, the 390 dons its signature dual-LED headlight and does away with the misleading handguards.

Though the 390 shares many elements with its Duke family members, the model’s bodywork does hint at a possible development. The right-front tank cover follows current convention and resembles those found on the 250 Duke. However, the left-front tank cover features a dished section on its lower panel.

We’ll have to wait for KTM’s official unveiling to learn if that dished design is an aesthetic choice or functional piece, though. While aerodynamics traditionally make bikes more slippery, many OEMs are applying bodywork that amplifies rider comfort by shuttling hot air off the engine and the rider. If KTM punched a hole in that dished form, it could serve the same purpose. Of course, the element could be red herring to throw off theorists like ourselves, but it certainly highlights the 390’s potential (previously seen) upgrades.

What Are They Up To? 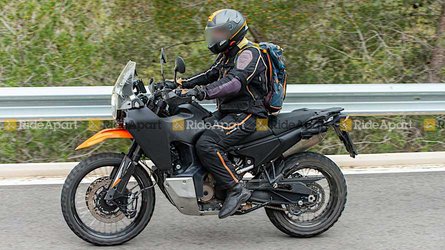 Spotted: Husqvarna Norden 901 Out Testing Ahead Of 2022 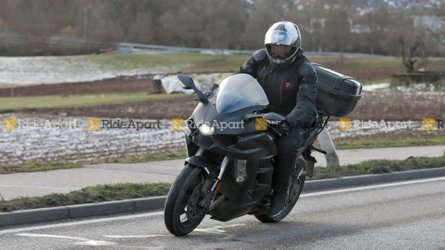 Spotted: Kawasaki Ninja H2 SX Next In Line For Radar System
By: Dustin Wheelen
++
Got a tip for us? Email: tips@rideapart.com