What’s in the box?

The owner of the to crates containing these extremely rare Hondas, Bengt Gunnarson, made excitement happen for himself. In fact, he kept the two boxes in the basement of his shop in Stockholm, Sweden for twenty or so years simply for the pleasure of unboxing them. The bikes were checked by the shop’s mechanics before going on display for all to enjoy.

The NR750 wasn’t a very popular model in its prime, ungratefully unappreciated for the marvel of modernity it was. It made the cat-eye style headlight popular, debuted the under-seat exhaust in four-stroke sportsbikes, and used carbon fiber before it was cool. Its V4 engine was a true conversation piece because of its oval pistons which totaled 32 valves. Modernity came at a price: the bike sold for an insanely high price back in the early 90s.

The VRF750R RC30 was the translation of what Honda did best for the track wrapped up in a road-friendly package. Though not the most powerful ride around, weighing in at 396 lb, the bike was the lightest and nimblest around in the late 80s.

The crate was found in North Carolina being used as a table at a dealer in Wilmington. Inside is sleeping a glorious two-stroke RD400F (as indicated on the box), also known as the Daytona Special and it’s almost a crime that it is being used as furniture rather than treated like the collection piece it is.

The Daytona was unveiled as a celebration of Yamaha’s success in road racing, thanks among other things to the standard RD400’s agility. What Yamaha didn’t know then was that the model was also to become the last stronghold of the two-stroke twin engine. Other companies had already moved on to the four-strokes due to increasingly severe emissions standards. 1979 was also the last year the RD was produced.

This might not be as rare a find as others—there are still “original” Bonnevilles on the roads to this day. But try finding one with 0 miles on the counter. Plus, this special edition of the Bonneville was designed as a celebration of the Queen’s 25 years on the throne, back in 1977. This Jubilee was hidden away at H&H Cycle of Ohio.

The National Motorcycle Museum listed the special edition’s features as: “Chrome plating was added to the engine side-cases, the tail light housing was chromed and chrome rims were painted and stripped down their centers, a classic touch. Cast alloy wheels were optional. Body paint and badging were nicely designed. Upholstery included red piping. Each Silver Jubilee came with a certificate of authenticity.” The unboxed unit was auctioned off for charity back in May 2018.

They found not one, not two, but 11 brand, spanking new 75’ Commandos in Aalst, Belgium. The discovery was made in 2010 in a shop where the owner had amassed an impressive collection of bikes and parts he was very stingy to share with his customers. So for 35 years, the new, never-used Nortons laid dormant in their boxes, piled up against a wall.

The Commando was introduced in 1967 to replace the Atlas. The 1975 MK3 introduced a new feature to the lineup: the electric starter and also marked the switch to left-foot gear change for the British brand.

Like the Lamborghini of motorcycles, Laverda’s early activities had nothing to do with bikes, but rather specialized in farming equipment. Then in 1948, the company started dabbling in the production of two-wheel vehicles and 20 years later, in 1969, Laverda introduced it’s first one-liter bike. It had to measure up to Honda’s 750 bombshell that dropped in the second half of the 60s. Building on its own 750 model, Laverda designed a 1,000cc, 3-cylinder mill that. About a thousand units of the C3 made their way to the U.S. before the model officially headed to production in limited numbers, where it also received the name Jota.

Non-Jota C3s are extremely rare nowadays considering their limited run. This unit was bought at an auction by an anonymous buyer who sadly proceeded to update the bike and put it on the road—but who can blame him for wanting to strut such a gorgeous find?

The initial idea for the TRW came during World War II, when the British Army requested that a stealth bike that could survive running through a foot of water be built. The 5TW  prototype was suggested in 1942, but the model never made it to production until 1948, when Triumph decided to start producing the TRW. Though the British Forces bought a limited number, the maker found buyers for the model abroad.

The TRW was built on a TR5T Trophy chassis and the 50cc side-valve twin was built using part from existing production engines which allowed the manufacturer to keep costs at a minimum. The model was finally abandoned by the British Army in 1969. This unit was initially found in a Canadian military warehouse, some 45 years ago and was auctioned off for $34k at Pebble Beach.

We’re there! 1986 is now considered “vintage”—considering it’s the year I was born, I’m not sure what that makes me. The ATC was delivered to a dealer but never unboxed. The dealer ended up making $24,000 when it auctioned the three-wheel off in 2010.

The ATC was a strange beast. Built from 1981 to 1986, the ATC (and not ATV) was built with racing in mind. The last generation of the model was powered by a 246 cc single-cylinder two-stroke engine until it was discontinued because of, guess what, the high number of accidents that involved the model.

I’ve never found a classic bike still in its crate, but man, I bet it feels like you’ve hit the jackpot when you do. There are many reasons for bikes to get lost and until computers tracked inventories and orders for us, we had to rely on people to do it. So a crate, here and there, would go missing and that was part of the game. 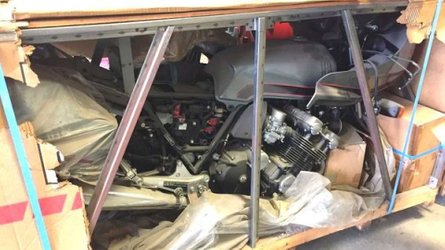 Check Out This 1981 Honda CBX-B In Its Original Crate 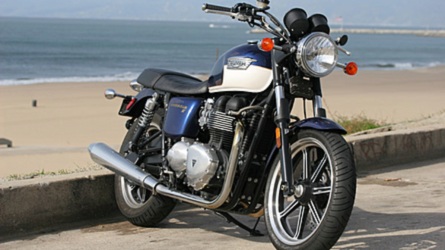 Then, a few decades later, someone finds the forgotten crate and unearths a little time capsule with a motorcycle frozen in time inside. Though it’s a rare occurrence, random crate finds do happen and it’s like opening a gift at Christmas. You never know what treasure’s on the inside and finding out is the best part. Because we’re vintage bikes nerds and we’re all a little envious of people who find mint-condition bikes, we decided to list some of the awesomest crate discoveries we’ve found.