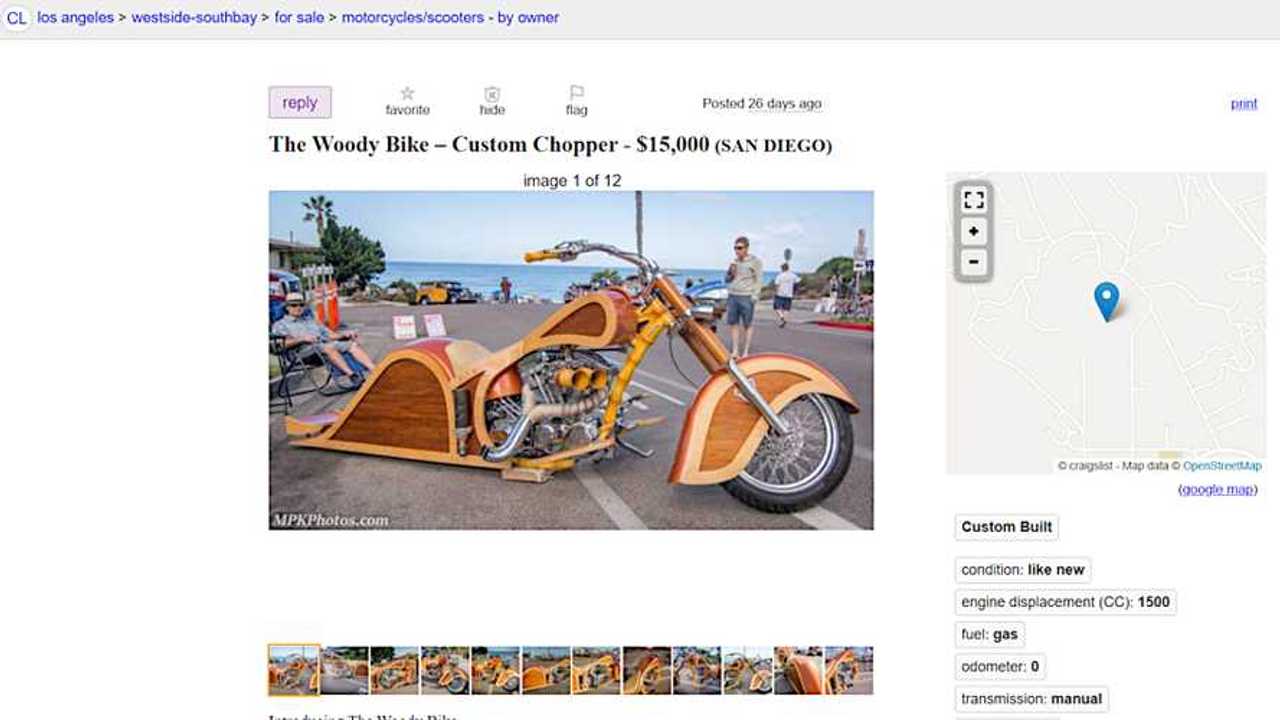 When you set out to build a custom bike—any custom bike—things generally work out best if you commit. By definition, every single design worth doing is going to be divisive. Some people are going to get on board with what you’re doing, and some most definitely won’t.

Speaking of divisive, I present, for your consideration, the Woody Bike Custom Chopper as it’s labeled in its very optimistic Craigslist ad. First brought to our attention by those fine Jalopnik folks, it’s a whole lot to take in all at once. It’s also a good reminder that, indeed, things are always about perspective. After all, to a carpenter ant, this thing is a home and a year’s worth of meals all in one. Just because it completely overloaded my pun circuits doesn’t mean it isn’t someone’s Pledge-soaked bamboo breadbox!

Ahem. Anyway, the seller states that it’s a custom show bike, which you can probably tell just by giving it a quick glance. He does insist that it’s rideable for short distances, and is equipped with an air compressor that lifts the whole thing up around six to eight inches, just so you aren’t lighting yourself on fire scraping those bags on the ground.

From the bamboo frame accents up front, to the surfboard floorboards, to the little tiki figure grinning demonically from the side, there’s a whole island cruiser vibe to this thing. That vibe is echoed down to the bamboo-look grips.

With all that in mind, it’s honestly a little disappointing that the lights seem to be a standard chrome instead of some kind of coconut shell-looking construction. The fact that you apparently have to park it on an old, disused, unfinished scrap of wood to keep from scraping the engine while it sits on its side stand is also a bit disappointing. Isn’t a show bike about, well, the show?

The seller doesn’t offer much in the way of details about what this bike started life as, nor any of the fun build stories you’d hope for when you see any kind of custom. Even if the end build isn’t for you, sometimes those stories are worth the price of admission. The cool thing about motorcycles is, even though we all have different tastes and opinions, there’s usually a shared appreciation of stories and hard work that go into accomplishing different tasks.

I know it’s just a Craiglist ad, and maybe you’d get some of that if you actually talked to the guy—but details like that could probably help sell it, too. He’s asking $15,000 for it, which is about $1,000 for each CC of displacement. Is it worth it? Maybe to someone, somewhere—or maybe not.

This Custom Dodge Motocross Hauler Is A 70s Vannin' Time Capsule
++
Got a tip for us? Email: tips@rideapart.com