Boutique Italian built only eight of the world’s most exclusive mini-moto racers.

The “Vyrus Motorcycles” name is synonymous with two-wheeled Italian exotica. The boutique Coriano-based marque churns out exclusive, built-to-order bikes brimming with carbon fiber, CNC’d bits, top-shelf running gear, over-the-top design, and hub-center steering up front—a setup that looks strikingly similar to Bimota’s Tesi model, which Vyrus initially helped to co-develop. For a brief time, around a decade ago, Vyrus actually held the distinction of making the world’s fastest production motorcycle, the 987 C3 4VV (which used a super-charged Ducati engine that made 211hp). 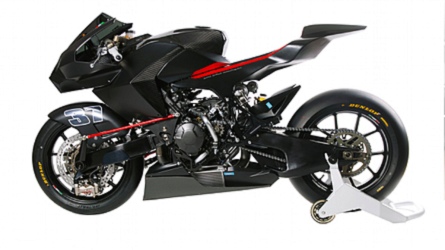 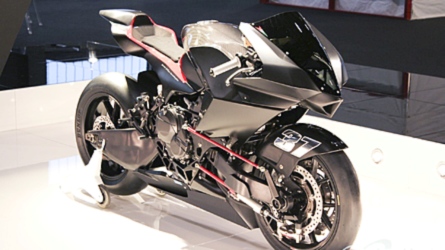 Unsurprisingly, adding a Vyrus to your garage is a privilege reserved for the upper-crust of the motorcycling community. The boutique manufacturer charges more than $90K for some of its wares, though the “lower-end” machines (if you can even call them that) are priced in the ballpark of $35-40K. Despite having known about the small Italian firm for some time, I was unaware the company ever made any pocket-sized two-wheelers, until this nutty little baby-Vy popped up for sale on eBay.

That’s right, turns out that back in 2005 the elite outfit created what they called the “50C32T”. The 50cc two-stroke single is reportedly good for 13hp and is supposedly eligible for mini moto competition (at least in Vyrus’ native Italy). According to Vyrus, the little racer was just too expensive to produce, with all its CNC’d aluminum framework and intricate components, and whatnot, leading to the company axing the mini after producing only eight units.

After it left the factory, this specimen ended up in the possession of a Northwest-based rider who, like the previous owner, made the choice not to introduce fluids to the bike. Not once. The thing is brand, spankin’ new. For whatever reason, the current owner decided to part ways with the hub-center-steered minibike via an auction on eBay. It hasn't received any attention and is sitting there with an unmet opening bid of $5K.