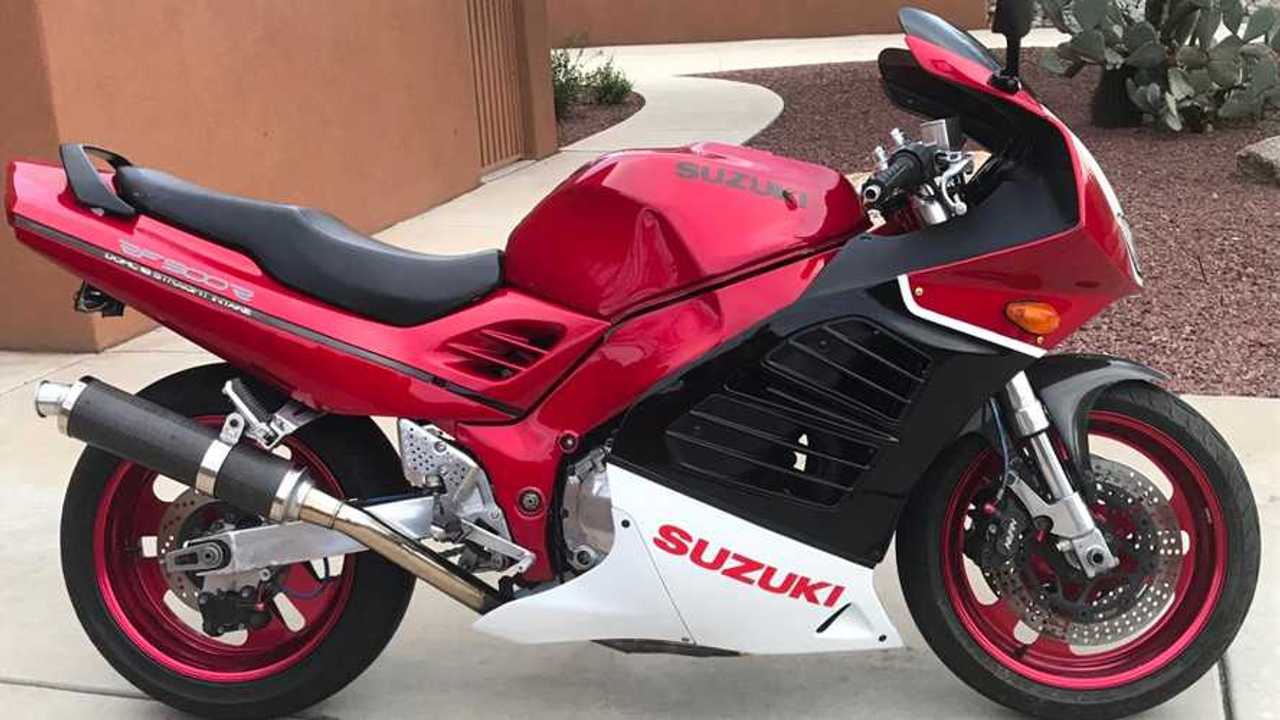 If you really want to get your hands on a Ferrari, but you only have enough money for a motorcycle, take heart! This 1994 Suzuki RF900R might be just what you need.

Depending where you live, you might be asking, “What’s an RF900R, anyway?” That’s a valid question in North America, because the RF line is basically unknown on this continent (there was also an RF600, and some markets got an RF400). It’s much more of a cult classic in Europe, though, especially the UK where riders have always known a bargain when they see it.

From Wild, To Even More Wild:

The RF900R was an odd remix of recycled Suzuki technology with Italian sportscar styling (check out those louvres on the fairing!). The engine’s bottom end was taken from the GSX-R1100, and the top end was derived from the GSX-R750 which made for a heady mix of the oil-cooled and liquid-cooled Suzuki superbike designs. When new, these bikes were rated for about 130 horsepower at the crank, which worked out to about 115 horsepower at the rear wheel. That’s barely half of a current flagship superbike, but it was not too bad for a mid-’90s budget machine.

That’s what the RF900R was, kind of—a budget bike. It had lots of power, and later models had adjustable suspension, but it was sort of an oddity that slotted in between the Katana line and the GSX-R sportbikes. Its closest competition was probably the Honda VFR800, which was a better bike but more money. The RF was much in keeping with Suzuki’s long-standing design concept of re-using old technology to provide power to the people at low cost.

This ‘94 machine, for sale in Arizona, has seen a resto-mod overhaul. The seller’s grafted on some USD forks off a Gixxer, as well as Kosman billet triple trees and clip-on bars. There’s a Graves ignition cover, anodized rims from Performance Machine, a WP remote reservoir shock, rear cush drive, carbon-fiber front fender, steel braided lines, and full Yoshi exhaust, with carbon-fiber can. It’s got an AZ title, and the odometer reading is 14,000 miles.

Those modifications should all make the RF a little less lardy, and a little more fun. The price tag seems a bit high, still, as $4,995 buys you an awful lot of motorcycle on the used market these days. It’s an unusual machine for the US market, though, and this one seems to have been built with some careful thinking.