The Peril Speed Equipe Trio Can Be Yours 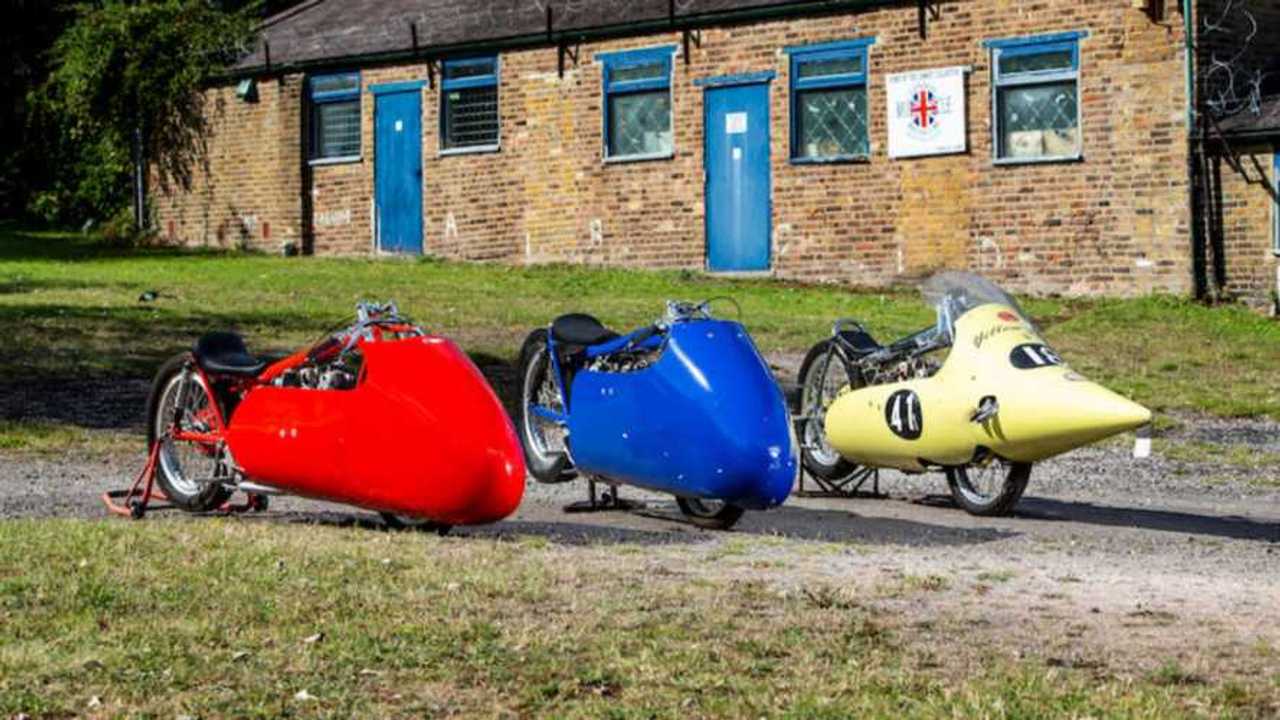 These classic Triumph-powered drag racers are going up for auction.

After a severe crash in a circuit race, self-taught motorcycle and cabinet builder Bill Bragg turned his attention to drag racing in the late 1950s. Between 1960 and 1962, Bragg built a series of three motorcycles that would go on to not only be quite competitive in their own right, they also ignored some of the established rules of how to build a racing bike and created a few new ones along the way. These historic bikes go up for auction on Saturday, October 19, 2019.

25 Of The Raddest Bikes And Things At 2019 Vintage Motofest

All three of these bikes used Triumph's 650cc engine and frames built by Bragg himself. The fuel tank was incorporated into the frame's top tube, while the oil tank was included in the down tube.

Bragg named the first of these bikes the Yellow Peril, named for the color of the fairing made from a P-51 Mustang drop tank. Like the World War II fighter plane, the bike's exhaust came out from either side of the fairing, which was well forward of the engine. Over the years some have suspected this was done for aerodynamic reasons, as the P-51 itself used its supercharged engine's exhaust to provide extra thrust. The truth, however, is much more mundane. Bragg simply didn't have a tube bender that could put curves in the exhaust pipes for a more traditional arrangement. Still, it ran the quarter-mile in 13.39 seconds or 13.99 seconds with a sidecar. Both were extremely respectable times for its day.

Bragg's next bike was the Scarlet Peril. It featured some improvements over the Yellow Peril's design, such as a swingarm and rear suspension to provide better traction on bumpy tracks, Amal TT carburetors, and a rounder, less pointed fairing than the P-51 cast-off. Despite the improvements, the Scarlet Peril was no faster than its yellow predecessor, so Bragg wasted no time before trying again.

That third attempt was the Blue Peril. It went back to the general design of the Yellow Peril but used the rear suspension and fairing of the Scarlet Peril. Bragg was determined to make this bike faster than the others and added a Shorrock supercharger. provided by the Allard Motor Company.  Adding more air let to some fuel starvation problems, but after fixing those the Blue Peril ran the quarter-mile in 11.19 seconds.

Bragg continued to race the Yellow Peril and Blue Peril, both with and without sidecars, through 1966, when he moved to Australia. The bikes disappeared until 1999 when they were discovered in the collapsed shed of fellow racer Ron May after he passed away. Bob Anderson and Tony Huck rescued and rebuilt the three bikes back to their original condition during the 2000s. All three will be going up for auction together, as a package deal, for $15,000 to $20,000. It seems a pretty good deal for a unique piece of British racing history.