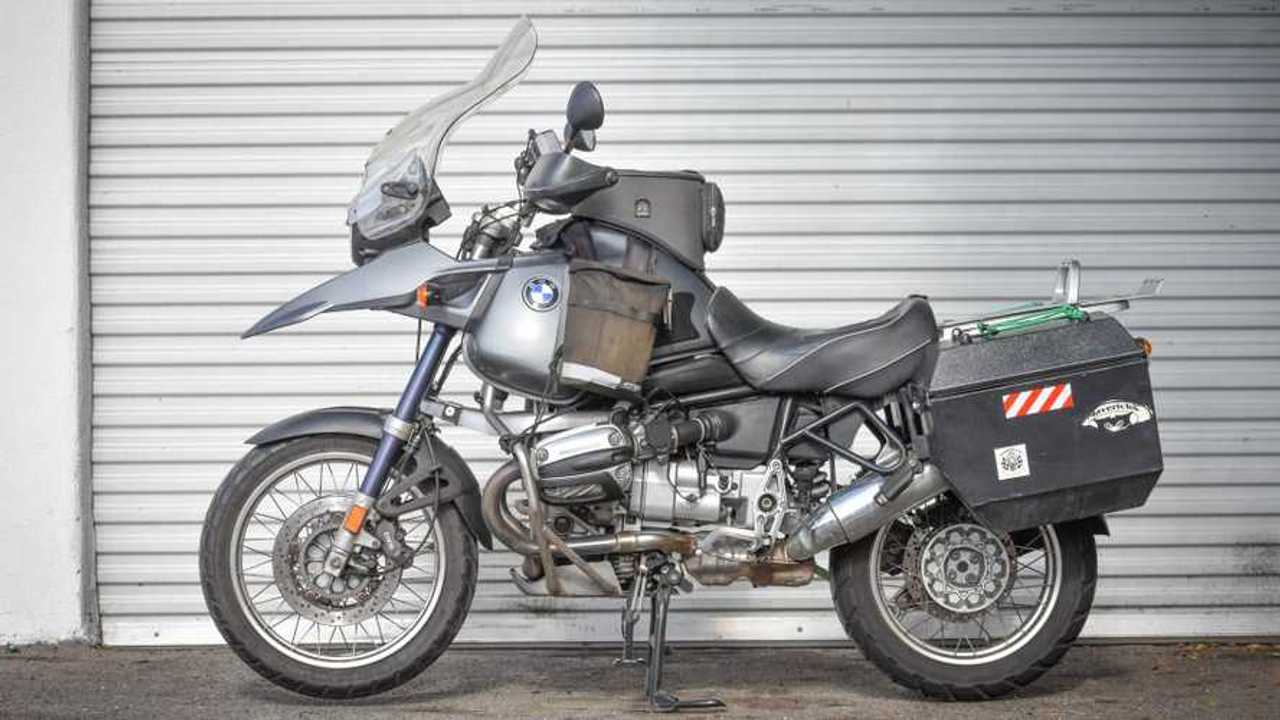 Here's a Beemer with everything needed to ride to Alaska, at a price you can afford.

Looking to ride off into the Patagonian sunset, to escape the miseries of the modern world—just you, your bike, and the Pan American Highway? We’d all love a brand-new bike for an adventurous trip like that, but cash is tight for many riders these days, and we can’t afford a flashy new ADV machine. If you’re on a more modest budget, you might want to check out this 2002 BMW R1150 GS on Bring a Trailer.

The R1150 GS was built between 1999 and 2004, and came in two models—standard and Adventure. This bike is the former, which you can tell right off by the smaller 19-inch front wheel. . It was one of BMW’s most successful motorcycles, partly because Ewan McGregor and Charley Boorman used a pair for Long Way Round, their televised globe-circling trip in 2004. GS fans still love it today because of its user-serviceable mechanical simplicity, with electro-tech only used where needed.

When new, the R1150’s fuel-injected, oil-cooled 1,130cc flat twin was rated for 85 horsepower, enough to handle any highway. It got all that power to the ground through a six-speed gearbox and shaft final drive. ABS was optional, and BMW also offered a factory GPS — this machine has both. During its production, motojournos loved the R1150, and frequently touted it as the best adventure bike in the world (and sometimes the best sport-tourer and best all-rounder, too).

BMW made a lot of these bikes, but while they were a high-quality machine, they’re getting harder to find now. Many of them were worn out by crossing multiple continents, or making countless trips to Starbucks, or crashed off-road; as a result, prices are still affordable on used examples, but they might not stay that way. Airhead-engined Beemers are getting more expensive, and it’s likely oilheads like this R1150 aren’t far behind.

This specific motorcycle is particularly appealing because of its full accessory package. Along with the satnav system mentioned earlier, it’s got quality Jesse luggage, a Corbin seat, Aerostich tank panniers, a BMW tank bag, three windshields, and only 50,000 miles on the clock. There’s lots of life left in this bike, if it was taken care of properly—and if it wasn’t, if the price stays low, you can afford to rebuild it and have a fine adventure bike for years to come.