VTR Customs delivers one of the cleanest, NOS-breathing, no-expense-spared cafe racers of all time.

Cafe racers are so common that even when I see a particularly well built project, I’m usually left underwhelmed unless it’s something truly next level. When looking for a next level cafe build, look no further no VTR Customs’ recent BMW R1200R build called Veneno Blanco (White Venom in English). The use of bespoke parts combined with various elite aftermarket components make this a truly world-class build, earning it the spot of this week’s Bike of the Week.

The story of Veneno Blanco starts with a customer who was using his then mostly stock BMW R1200R to compete in various on-road competition, though partaking in an open class regularly resulted in the boxer getting over powered and left in the dust. So, said owner approached VTR and the Swiss shop got to work redesigning the Beemer, opting to give the machine a full cosmetic makeover as well as adding a bit more oomph under the proverbial hood. 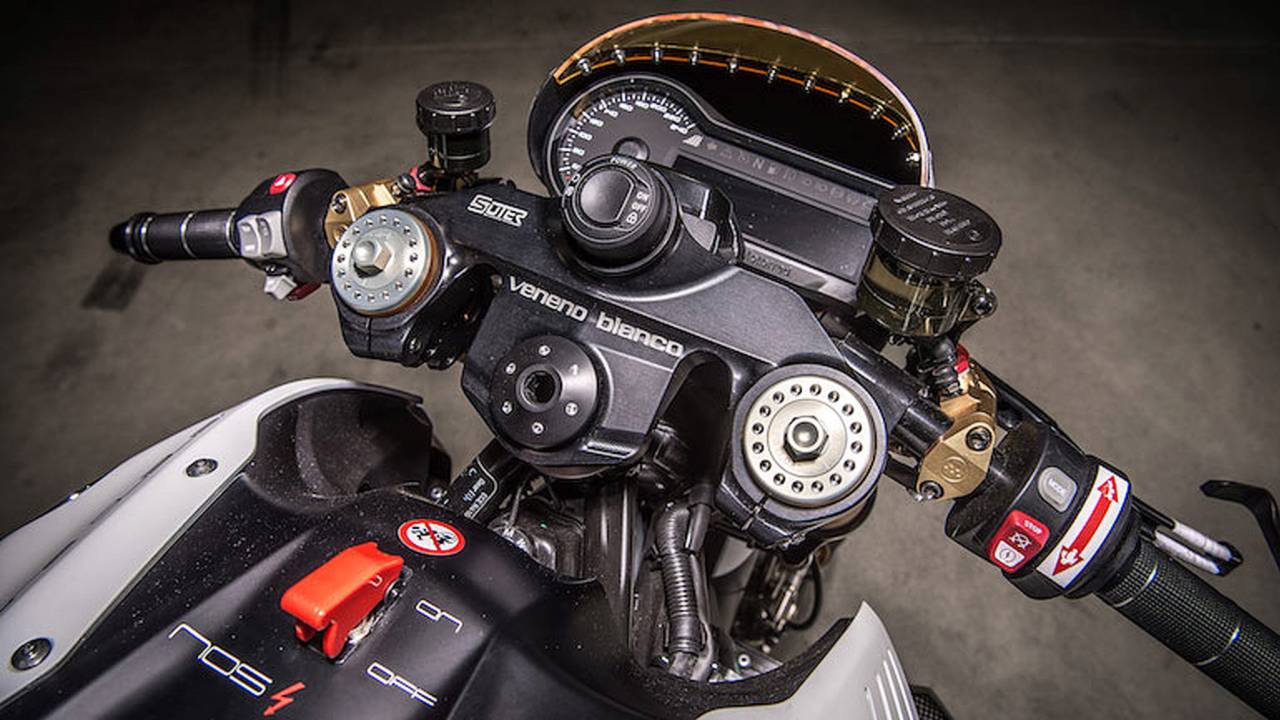 As a race fan, I can't get over how cool that custom Suter unit is

Right out of the gate the main theme was adding a few ponies, upping the scoot’s performance, and shaving off a few pounds. This was done primarily through the use of carbon fiber and high-spec race parts. Fortunately for the folks at VTR, the client didn’t care if the build was street-legal—at least not at first—giving the builders even more freedom to explore, especially after confirming that said client was happy to foot the bill on a no-expense-spared project. 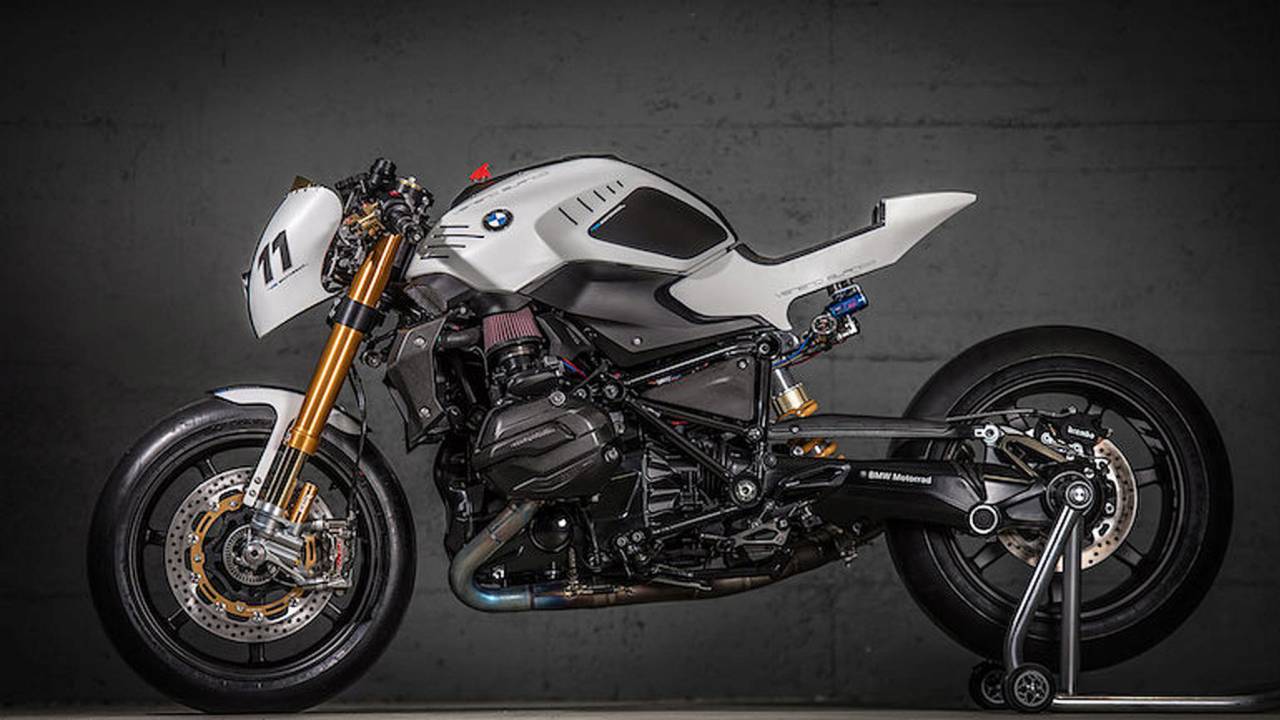 A side profile shot of VTR Customs' BMW R1200R racer

After stripping down the boxer, the VTR crew got to work replacing the BMW’s front end with some top-shelf Öhlins forks. Making the new front end that much cooler is the fact the new Öhlins units are held via a custom top triple clamp that was made by legendary racing outfit Suter Industries at its Swiss Moto2 facility. Trick Brembo discs and calipers were also tacked on, as was a set of lightweight, carbon fiber BST wheels and some equally trick Magura controls including HC3 brake and clutch pistons. 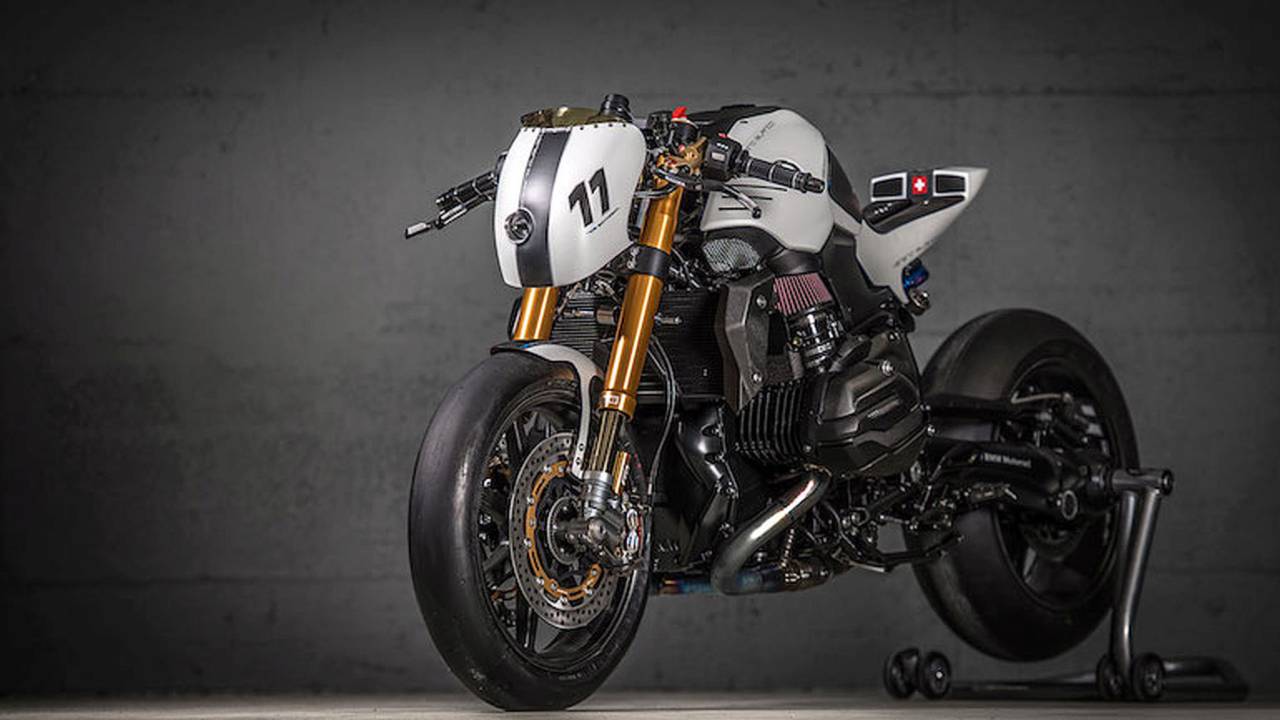 While VTR typically sticks to its rule of only producing one-off machines, the client behind the White Venom owned a prior VTR build, so the shop felt better about making an exception this one time. The handmade tail section off of the client’s other VTR bike was removed and then 3D scanned so it could be copied via 3D printer a few times at the headquarters of the freaking Sauber F1 team who, like Suter, happen to practically be neighbors with the VTR shop. (Hence the “Printed by Sauber F1” script on the tail). 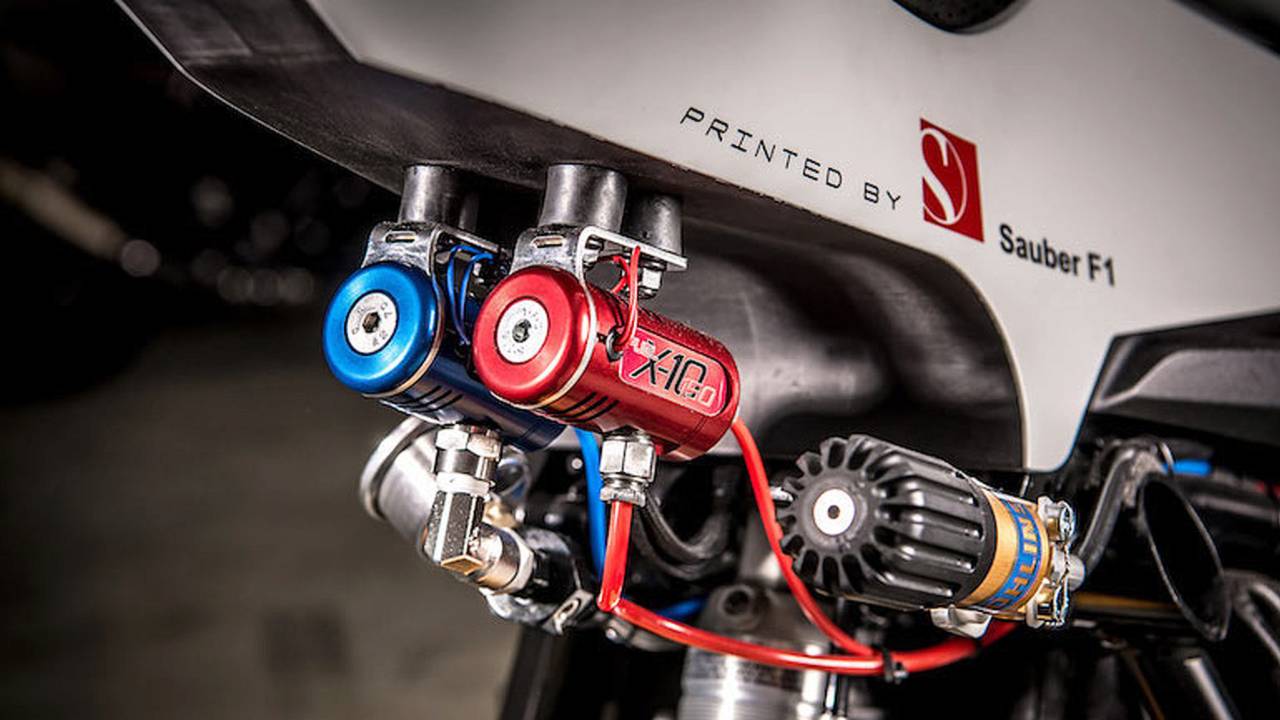 Underneath the tail are the nobs to turn up the juice

Next came reworking the engine, which was given a pair of open exhausts, free-flowing intakes, and last but not least, a nitrous oxide boost system. Because the builders didn’t want the NOS cans to be overly visible, the decision was made to create a bespoke gas tank cover that the nitrous could sit inside of. From there, lines were run to under the seat where the controls are, as well as to a covered, aviation-style toggle switch that was fixed atop the gas tank just behind the instrumentation. 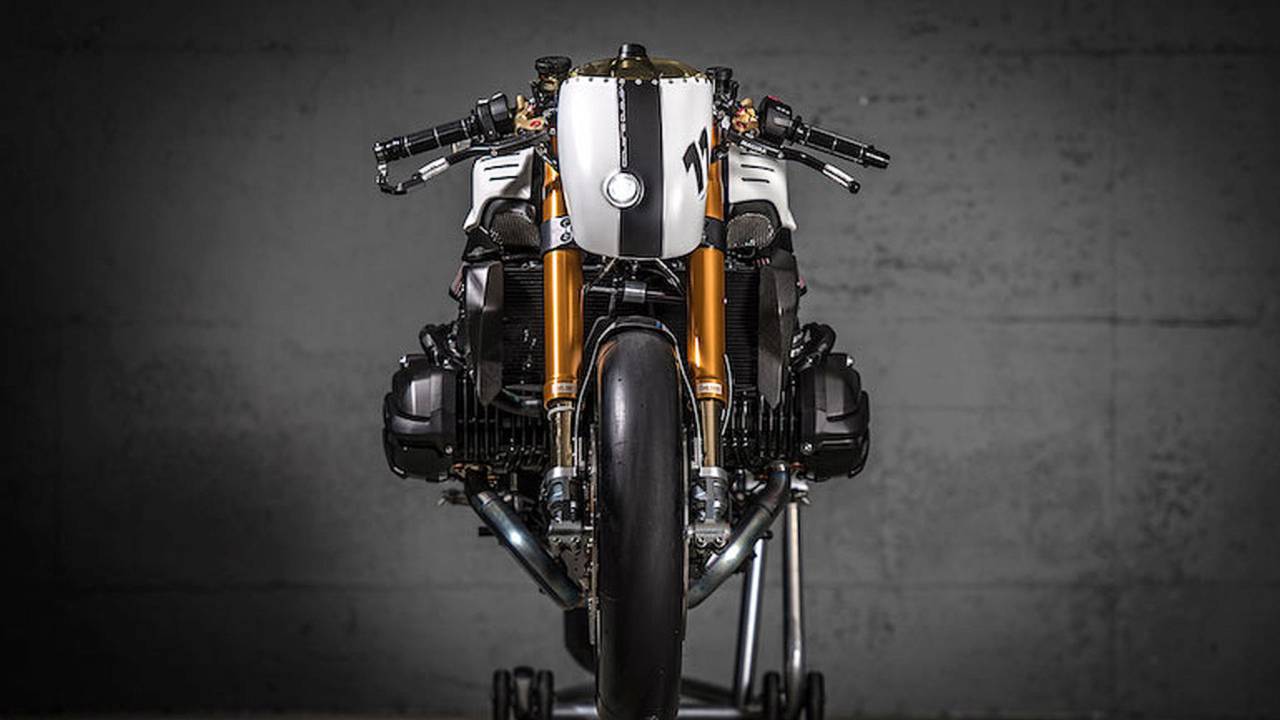 While the White Venom may have what looks like a wide stance, it's still reportedly plenty fast

The cockpit was another area that looks less complicated than it was in reality. The Suter-made triple clamp sports the classic Suter industries logo as well as a “veneno blanco” script, and the whole section has a very high-end feel to it. An alloy cowl covers the digital/analog instrumentation combo, and a keyless ignition appears to have been installed as well. A small light was added into the cowl at the last minute in order to keep it street legal, but I’m not sure if it possesses the rest of the necessary hardware. 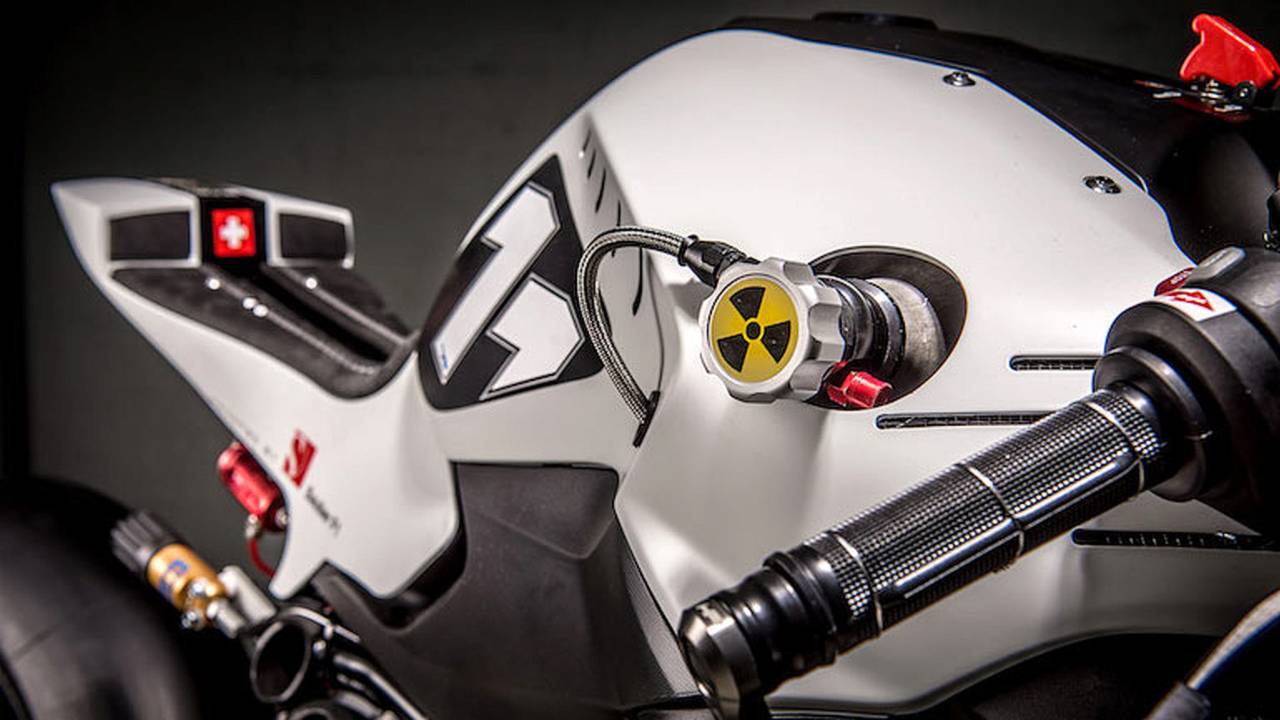 While I’m totally in love with this build, it’s almost painful to think about how much it must have cost to build. I’d be curious to calculate just the front end of this one, I guarantee it’s in the five figure ballpark. My only small complaints are that I think the radiation symbol looks a little Hot Topic-esque, (aka tacky) and I'd really liked to have seen the plastic fluid reservoirs swapped out for nice Rizoma units. Having said that, this machine looks absolutely amazing, boasting factory quality and craftsmanship, while still sporting a unique and original, one-off design. For all the reason’s mentioned above, VTR Customs’ Veneno Blanco is this week’s Bike of the Week. If you know of a bike you think deserves to be RideApart's next Bike of the Week, drop us a line at info@rideapart.com

From the back the build looks a little wider than you'd expect, if you're unfamiliar with boxer engines that is