Bike of the Week: Spirit of the Seventies' 675 Daytona Cafe Build 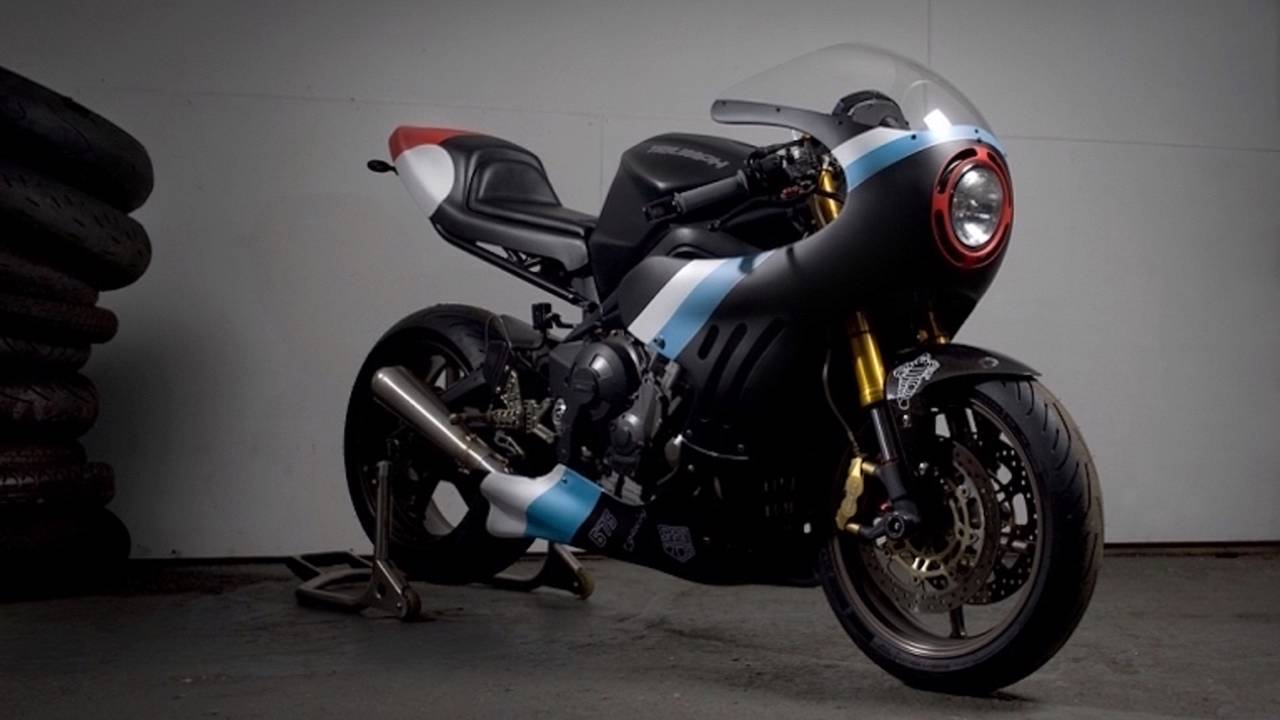 I love seeing what professional customs shops are able to come up with, but often times bespoke motorcycles sacrifice raw performance for style. While I can thoroughly appreciate a beautiful one-off bike, if it can’t realistically be ridden then we’re basically talking about a statue with an engine. It's always cool when a custom build achieves a highly stylized aesthetic without compromising the donor bike’s performance. One of the best examples of this I've seen is a Triumph Daytona 675 from the UK’s Spirit of the Seventies.

Run by Tim Roger and Kevin Taggart, Spirit of the Seventies specializes in dressing up modern bikes in vintage attire. In addition to creating bespoke two-wheelers IRL, as they say, SotS also generates some seriously cool digital renderings of custom motorcycles. I was pleasantly surprised when Tim and Kev brought one of their digital renderings to life, transforming a client's track weapon into a retro-clad road-goer.

Spirit of the Seventies' digital rendering if the build.

The client had previously purchased the Triumph 675 Daytona before handing it over to T3 Racing who tuned the 130-horse power triple to race-spec. From there, the owner fitted the bike with full track bodywork, top-shelf Öhlins suspension, aftermarket rear-sets, frame and axle-sliders, and an Arrow exhaust. Unfortunately, the client’s soon-to-be-wife asked him to ease off the throttle a bit upon learning they had a baby on the way. So he did, but he wasn't ready to stop the project all together.

The donor Daytona before the transformation.

Instead of selling the race-ready 675, the client brought it to Tim and Kev to give it a cosmetic makeover. Spirit decided to go with a design that blended vintage two-stroke GP aesthetics with the flavor of modern Moto2 machines. A design was drawn up for the fairing and seat before being brought to a vintage car panel-beater Ian Pitney to have the work done. Though this was Pitney’s first two-wheeled project, he did an incredible job delivering the bespoke aluminum bodywork after molding it around the engine and frame and hand-cutting the fairing's 15 side vent slits.

Because the Daytona’s central air intake was blocked by the build’s new circular headlight unit, a clever circular intake funnel was fabricated around the headlight which now feeds air to the British triple. It’s a subtle feature but a very cool one. Tim and Kev also opted to retain the track bike’s engine covers, tank, levers, brake hardware, front fender, rear-sets, and suspension, though it was re-tuned for the street. A matching tail section was also created by Pitney that mimics the pre-2000s two-stroke 500cc machines and uses the Daytona’s stock subframe. A bespoke windscreen was created by Skidmarx, and Glen Moger hand-built the custom’s seat pad.

The Daytona's new intakes circle around the new headlight and funnel to the engine.

The build also required the bike to be rewired, so the crew at Spirit decided to go with a MotoGadget keyless ignition system. The aluminum bodywork was then coated in a matte livery courtesy of D-Luck’s Paintshop in Brighton on England’s Southern coast. To make the Triumph fully-street-legal a fender eliminator kit was added (I know that sounds contradictory) along with rear LED micro-turn signals and Oberon bar-end indicators up front. The three-into-one exhaust on this bike is also pretty noteworthy—it's a custom unit created by Co-Built that utilizes a trio of headers off an ex-British SuperSport Racer that feeds into a single stainless steel pipe.

I really like how well done this build is and how a lot of the elements from the track bike were carried over instead of simply being changed out for the sake of changing things out. The main elements such as the bodywork and exhaust were beautifully executed, and the front air intake is beyond cool. For all the reasons above, Spirit of the Seventies earns yet another Bike of the Week spot for this Daytona 675 build.

If you have a bike that you think deserves to be RideApart’s next Bike of the Week drop us a line at info@rideapart.com.