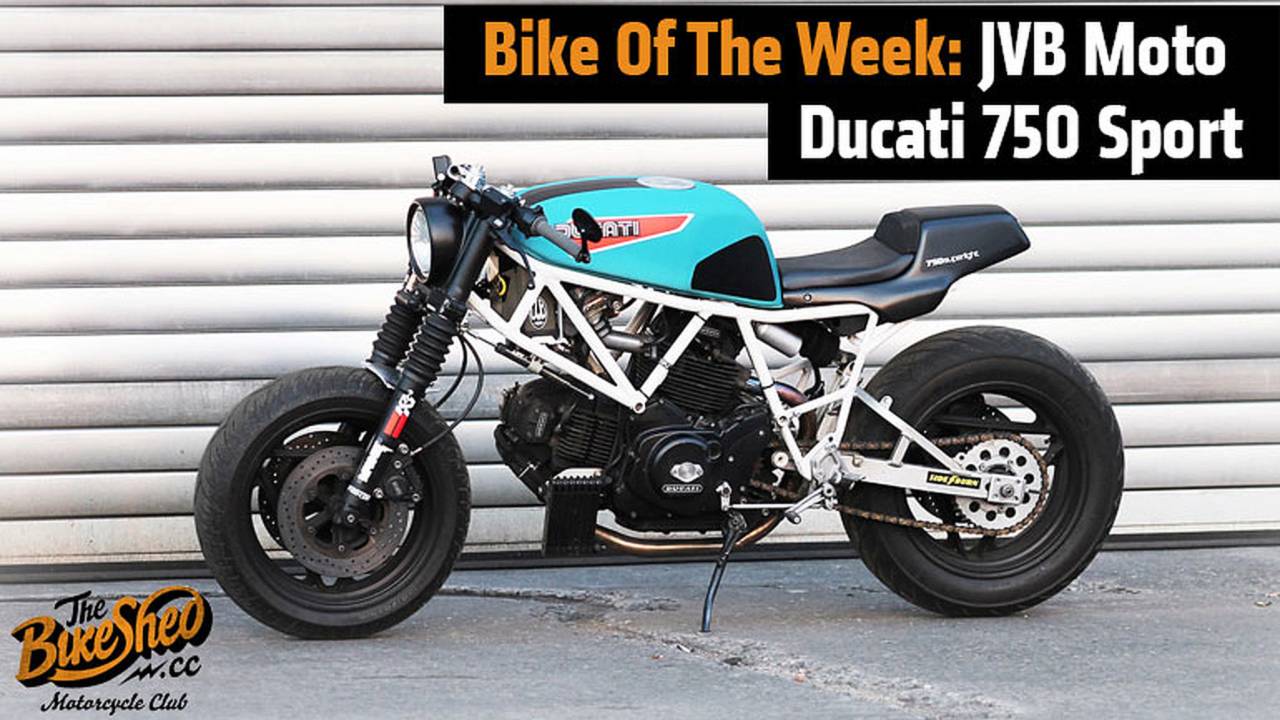 Somethings cry out to be held, like kittens. And sometimes, a bike build cries out to be ridden. The types of machines that are not complete until interfaced with their human commander.

Got a bike like this, or is yours just to look at? This week on RideApart Bike of the Week we present an ongoing undertaking undertook by a taker going to work, Jens at JvB-moto.

Based on a 1988 Ducati 750 Sport, with a goal "to build a usable, really fast, unrestored everyday machine". While not a legendary platform, the Ducati Sport was known to easily lean down to your knee and then stand you up to just shy of 130mph. Built for a purpose and rumbling on a budget, Jens assembled a two cylinder torrent of torque for the streets of Cologne, Germany.

The albino trellis frame is basically a 750 Fl Replica with a modified front section and Jens modified it further and edged the fuel tank forward on it by 20mm. Lowered foot rests and high clip-ons coupled with the custom JvB tail unit make piloting all the more gratifying. Lighting the way is an original JvB headlamp nested with a single gauge.

Nudging the dial to 155 kg, with 16 inch Avon radials, wrapping stock six spokes, giving grip it's going to be an interesting commute. With the cannibalized Termi 2-into-1 exhaust from a Monster 1100 announces my arrival, I am picturing myself hugging teal tank, barreling through a tunnel, accompanied only by the echoing roar of an Italian, 90 degree twin. In this paired down trim, equipped with Mikuni flat side racing carbs and K&Ns the ride only becomes more boisterous to consider.

Jens built the bike for his own daily ride to JvB and while not fussy it has all the necessary bits to put a smile across one's face. The paint was inspired by Magnus Walker Porsche 911s and casts a cool hue to the “illegal street racing”- style.  Wouldn't you get your hands dirty on this venerable 750?

80s era absorbers gave way to a SuperSport Showa and booted Marzocchis up front. The low slung gunslinger oil cooler and one off fender add to the superintendent stance. Ducatis typically were stocked with exceptional stoppers and they proved more than adequate to stop this svelte beast.

When look gives way to feel one doesn't see it when one is on it but one certainly feels it. Just like that smile on one's own face, or that feeling one gets when one gets that feeling, I would say this seven fifty feels just right. See some bikes just like it, and many more not like it at all, at the thebikeshed.cc  http://thebikeshed.cc/2014/05/19/jvb-moto-750/. Check out Jens on http://jvb-moto.com/