A preschool teacher hand built his first custom with some board track racer influence and it’s just plain cool.

Want a turn-of-the-century board tracker but don't have the cash? Build one yourself!

The motorcycles produced in the early-1900’s straddled the line between bicycle and motorcycle, and served as an important step in the evolutionary chain. They are also some of the most sought-after bikes in existence. Machines from legendary antique marques like Flying Merkel, Yale, and Marsh-Metz all routinely fetch well over $100,000 at prestigious auctions like Bonhams, as do pre-Great Depression Harley and Indian board track racers. Owning one of these iconic machines is a feat typically reserved for an elite few, unless you want to build one yourself. 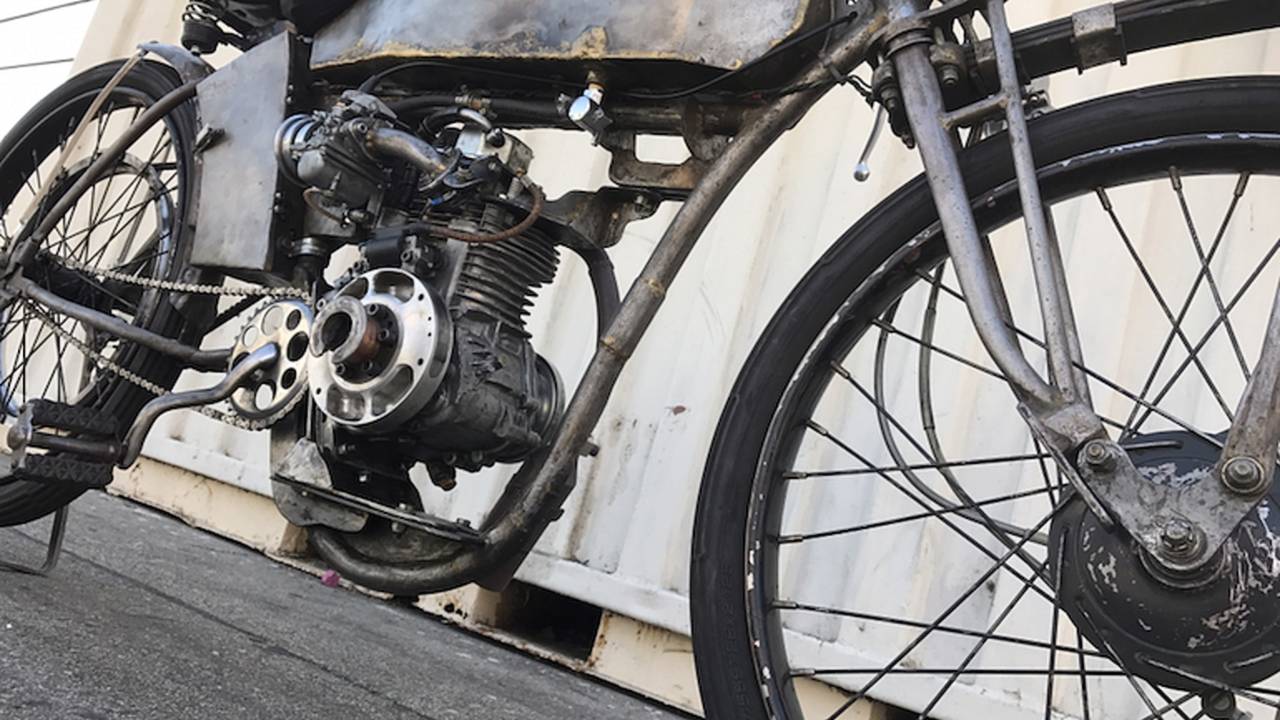 Today's bike of the week is just that. It's a one-off, hand-made, turn-of-the-century replica built out of bicycle parts with a Harbor Freight engine. It's an amazing homage that was conceived and built by Gilbert Brebe, a school teach short on building experience but long on ambition.

Brebe started this project three or four years with a few basic sketches. He had never built a motorcycle – or done much welding or metal fab for that matter – but the Los Angeles-based teacher had a particular appreciation for early twentieth-century machines and a small shop to work out of. He was incredibly creative and resourceful when it came to looking for the necessary parts needed to bring this build to fruition, and he did a remarkabe job of replicating the style and flavor of the ultra-elite six-figure early-1900’s machines that inspired it.

The project was also helped along a decent amount by the internet’s vast collection of explanatory how-to forums and videos, as well as Brebe’s own cursory knowledge of engine mechanics. He explained to me how much of the build thus far had been trial and error and that it was more recently that he finally got all the kinks ironed out, and necessary area’s braced and reinforced. 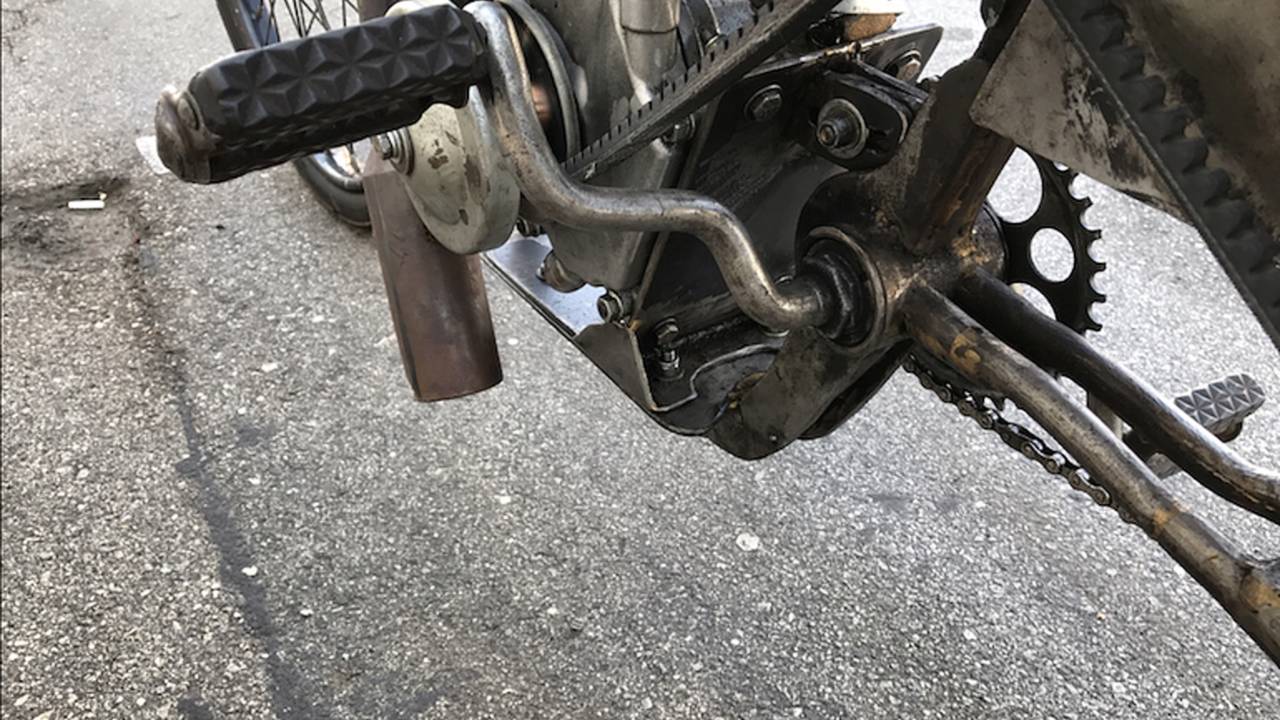 Starting with a half-century-old women’s bicycle frame, Brebe got to work chopping things up and fabricating. He extending the frame a few inches and reinforced it in a number of areas. He also went about creating all the one-off brackets needed to fit the necessary components to the frame and house the power plant. Brebe spliced a vintage fork in half and, after some welding, he had a bespoke leaf-sprung girder-style fork, and the rear-end retains the bicycle frame’s hardtail. An additional horizontal brace tube was welded in parallel to the bicycle’s top-tube to reinforce the structure above where the engine would mount. It would also carry the one-off, handmade, brass-welded sheet-metal fuel-cell. An old brass radiator cap was re-purposed as the fuel cap, giving the bike an added old-timey touch. 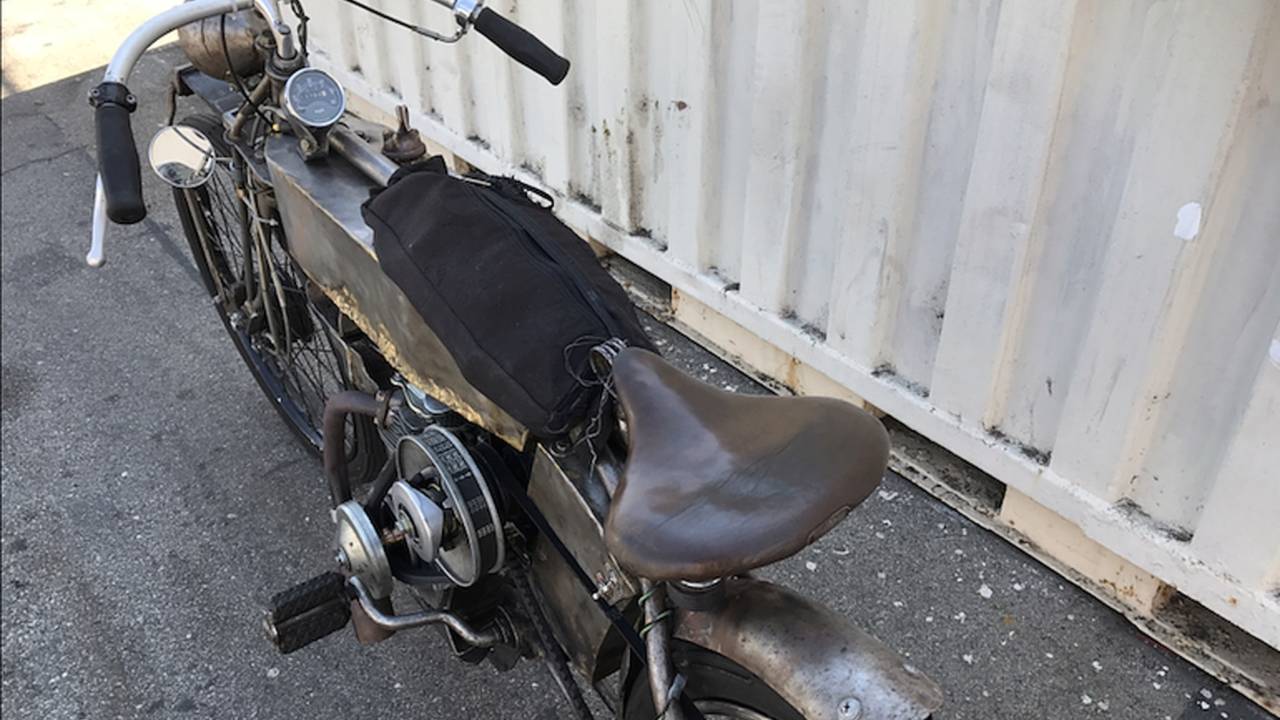 A single speedo mounted atop the tank serves as the build's only instrumentation.

A pair of 10-gauge Worksman heavy-duty steel rims were selected to fit the new fork and beef-up the wheels. All of the rest of the fab-work – storage compartment, battery box, headlight bucket, etc. – was done by Bribe in his workshop. A small tomato paste can became the catch-can for the oil-breather, and a set of small toggle switches were a convenient and cost-effective alternative to installing regular handlebar-mounted switches. 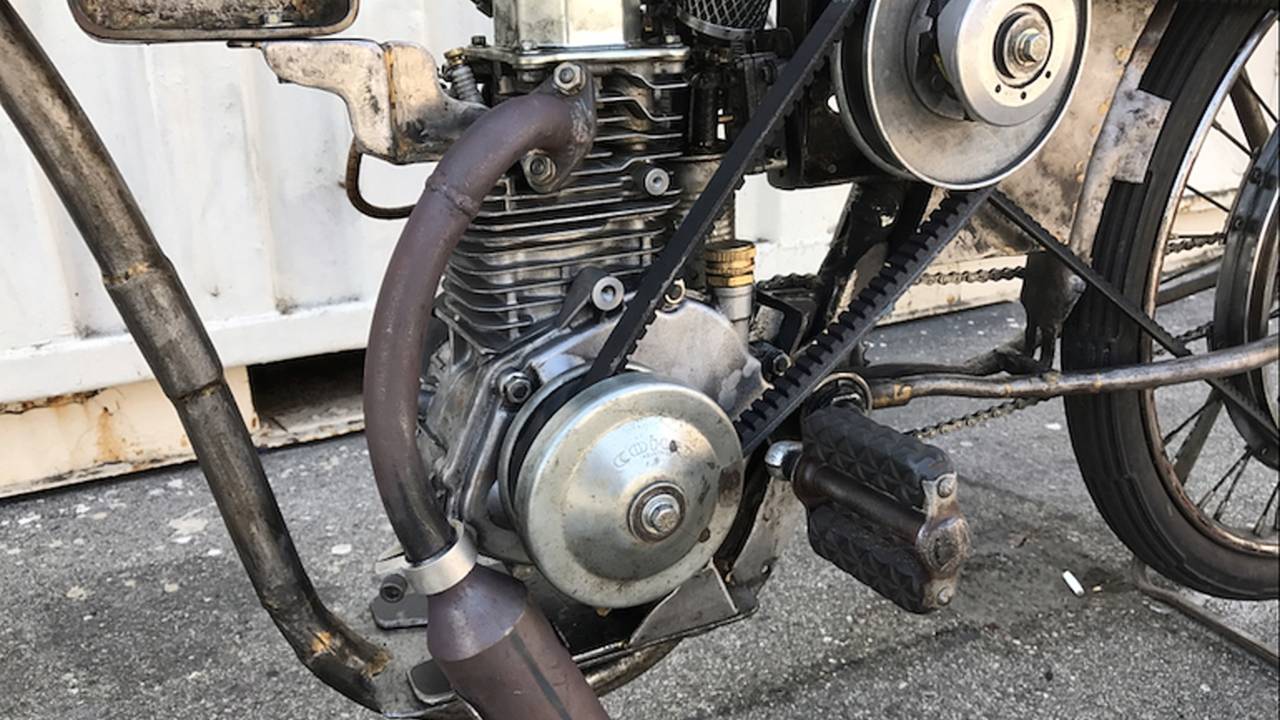 The exhaust was also a handmade unit. Also notice the tomato-paste can behind the belt.

Interestingly enough, the bike's engine came from a Harbor Freight Predator generator, a decidedly non-motorsports source. The 212cc, overhead-valve, single-cylinder workhorse inhales through a 22mm Mikuni carb, and exhales through a muffler that looks like it was made from a spray paint can. An Ark Racing flywheel was also fitted to the sub-$150 power plant, along with a handful of other modifications. To get the single's 6.5 horses to the ground, Brebe chose an automatic constant variable transmission and a clutch out of a go-kart. A front-brake unit from a CB100 not only keeps in line with the build’s early-1900’s aesthetic theme, but also provides more than enough bite to slow this lightweight down. Starting is, shall we say, extremely agricultural and involves a recoil pull starter like you'd see on a lawnmower. Brebe stores a rope in the bike's storage compartment that he wraps around the flywheel to fire up the engine. 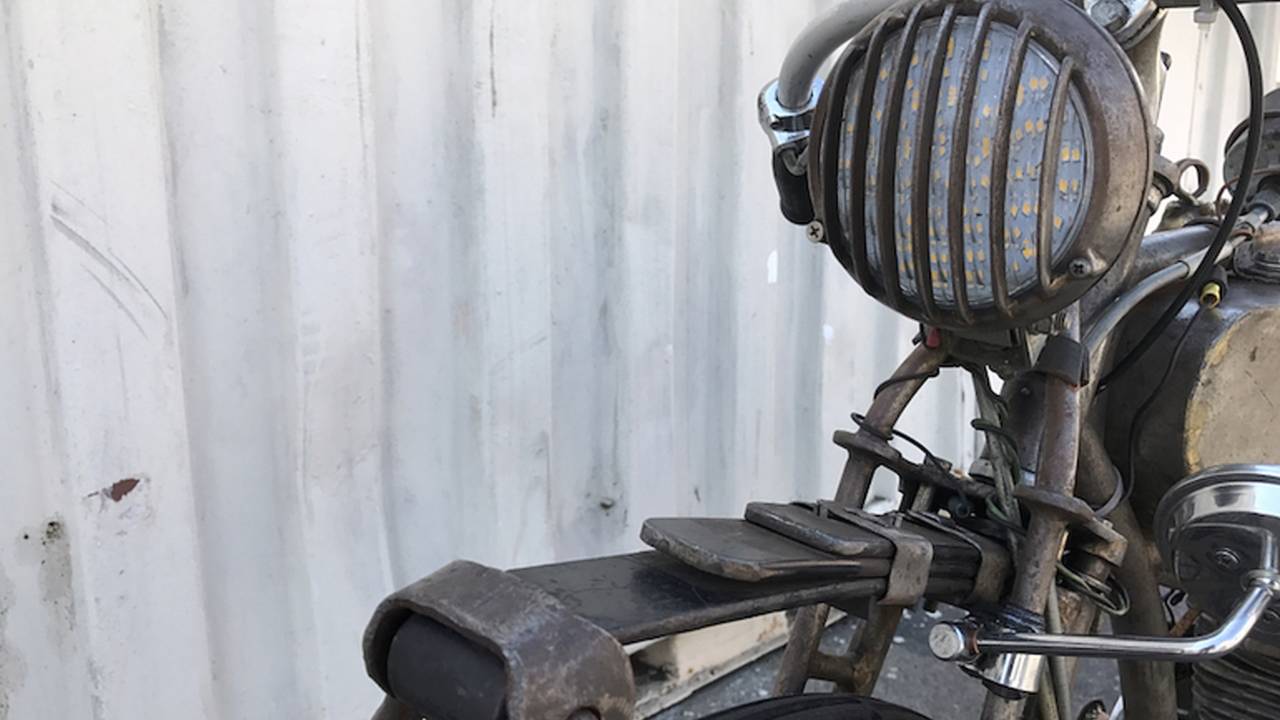 This build never would have been possible without Brebe’s ample patience, doggedness, and dedication while figuring out this bike. Time and time again, parts of the frame or brackets would snap, and then it was back to the drawing board to figure out how to reinforce the overly-stressed area. Luckily Brebe was never injured in the event of his frame snapping, although it did once force him to retire from a race. As of today the scoot is in fine condition and is not only frequently ridden, but also routinely races at local go-kart tracks in motorized bicycle racing events with SoCal Motor Bicycle Racing, a group that our own Bryan Wood did a cool article about last year. 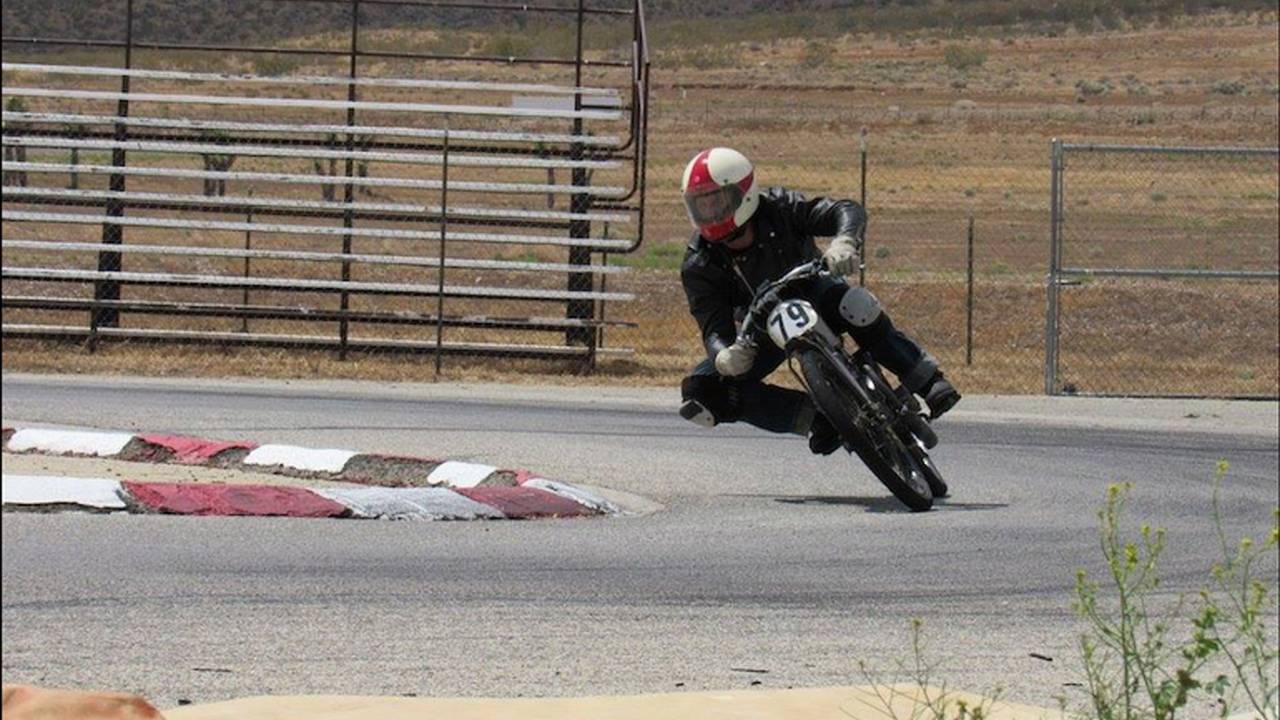 Gilbert and his bike hit the track

Brebe's unique custom garners a lot of attention on the street, and he's consistently asked what year the bike is due to its antique appearance, often surprising  people when he answers “2014”. I happened to come across it while passing by it parked in my neighborhood, and after learning more about it felt increasingly justified in making it a RideApart Bike of the Week. It may not be the most masterfully crafted custom out there, but it has tons of character which is just as important, if not more, than fit and finish. 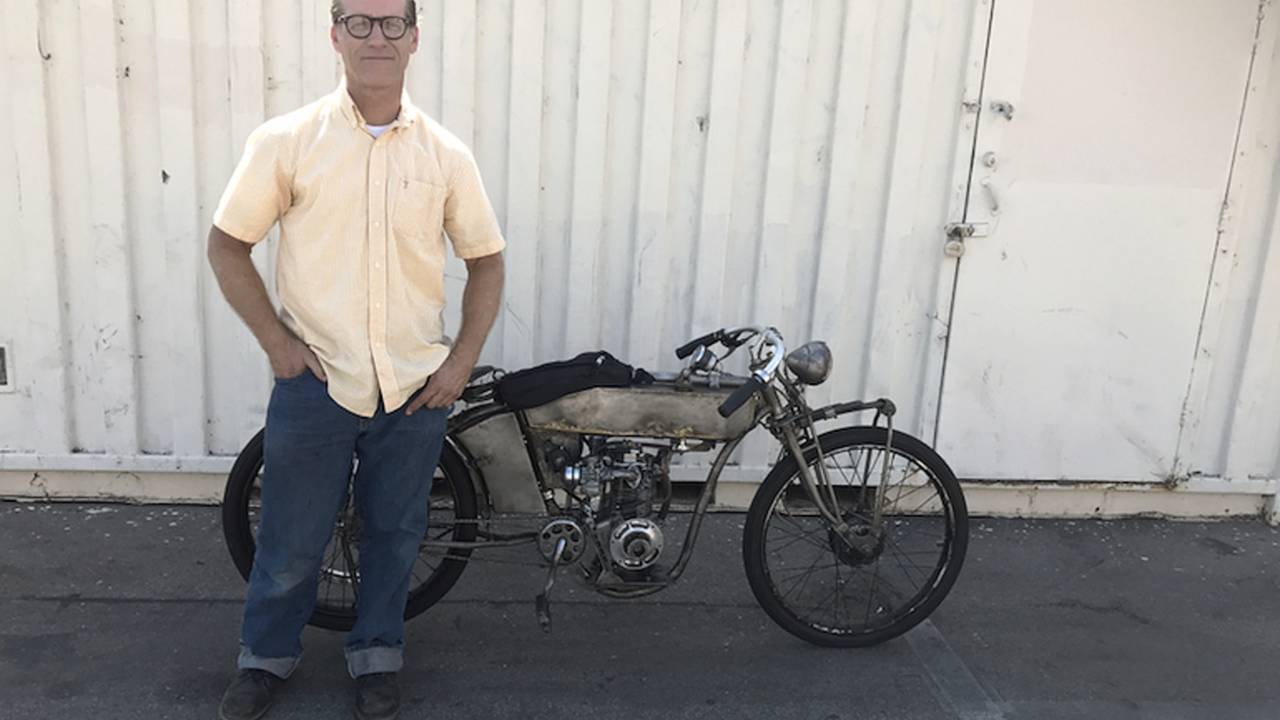 The proud owner and his unique machine