Roland Sands delivers an epic modern Scout build while borrowing heavily from bikes of the first half of the 20th century.

The 2017 Wheels and Wazes event in Biarritz, France earlier this year saw dozens of truly noteworthy custom builds being unveiled alongside a few new production models. One of the latter models was the Ducati X RSD Mach 2 Scrambler. While the vintage themed Scrambler is admittedly pretty cool, it somehow managed to rob another Roland Sands build debuted at the same event of the attention it rightly deserved: the RSD X Indian Scout

The 2016 Indian Scout engine that powers this unique custom is wrapped in a one-off frame that shows off the machine’s muscular inner-workings, and that’s linked to a custom swingarm. The front end is composed of a handmade Chromoly girder fork that has been fitted with an Öhlins TTX mountain bike shock. Two HID bulbs sit in carved out cavities on the antique looking girder fork. The fork, frame, and swingarm were all powder coated in a “vintage indian red.” Airtrix is to thank for the matching red paint digs on the fender, tank, and other sheetmetal where the genuine gold leaf accents were hand turned.

READ MORE: The New Scout Bobber is One of Indian's Best Yet | RideApart 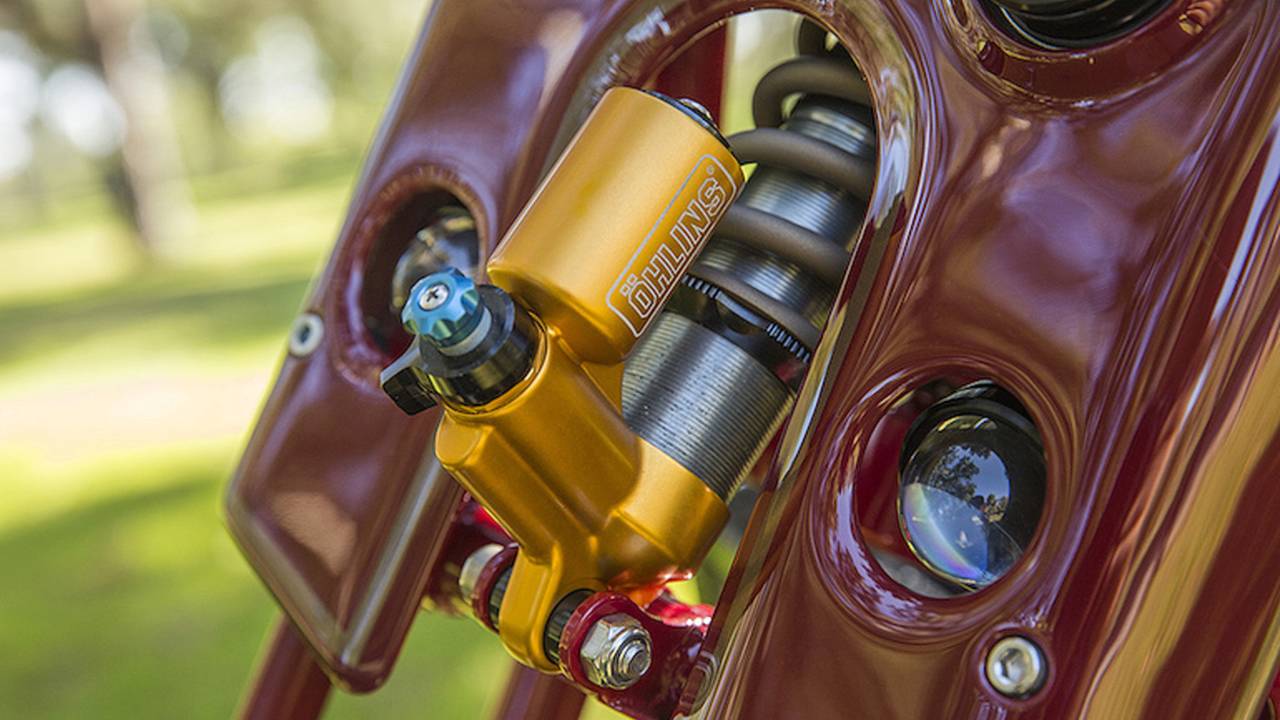 The rear fender’s width wonderfully creates the look of fenders of a previous era, and even the angle at which its mounted is authentic to the post-Great Depression era machines while still leaving the perfect surface with enough area to slap a number onto. A faux oil bag was created and used to keep all of the modern electronics neatly out of sight, furthering the build appearance's "historical accuracy." Two custom radiators also had to be made in addition to “cleaning up the rest of the cooling system.” Thanks to all of RSD’s tracker machines, various components from its tracker exhausts systems were able to be used in the one-off stainless steel two-into-one pipe that sports a modern slip-on and cap. 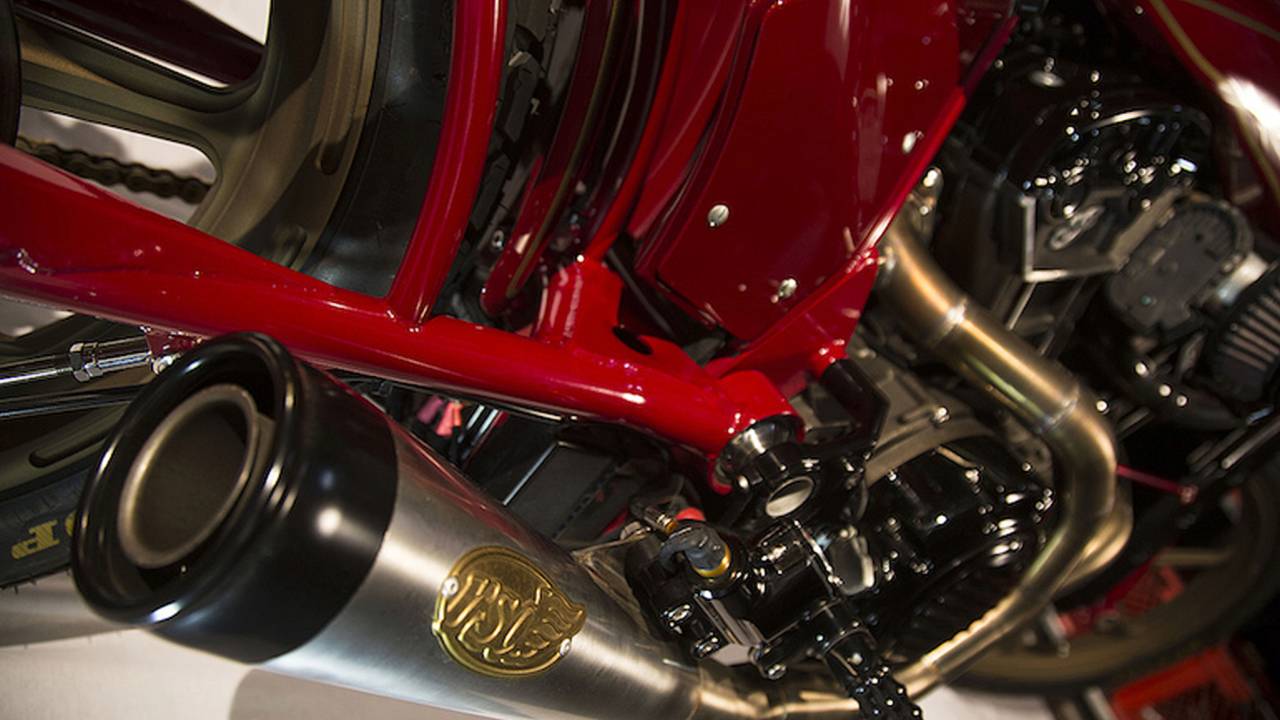 The handmade tank looks amazing and captures the feel of the early American machines this bike’s look is replicating. Like actual Indian models of yesteryear, the frame fits into a depression running through the top of the tank – not unlike the small tanks that hung from the motorized bicycles that were the first scoots. The tank also boasts dual bronze or gold fuel ports that look straight off a 1930s or ’40s machine. Getting the custom (pre-)bobber seat just right was crucial step in this build. The shape, silhouette, and ultimately first impressions elicited by this machine - and most machines for that matter - mainly come down to the tank and seat. The thin handmade hard leather saddle is clean, minimalistic - and like the rest of the build - beautifully harks back to the era RSD sought to re-create with this Scout project. 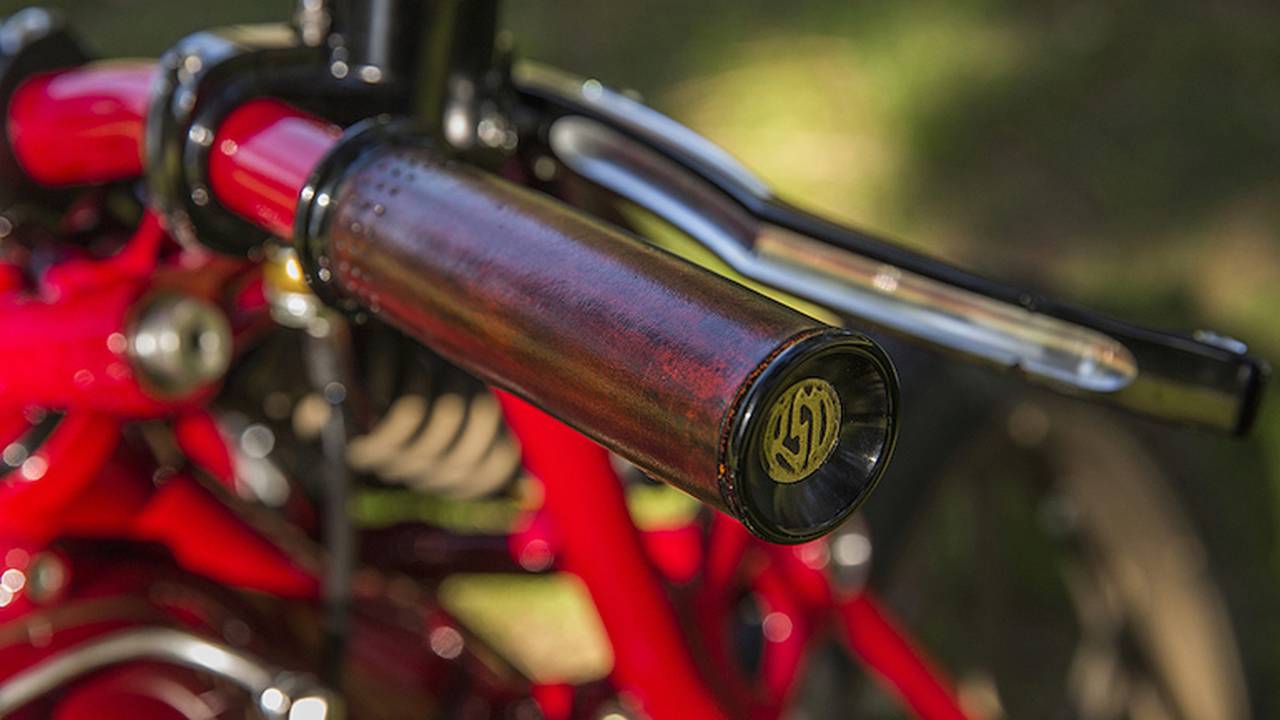 As much old timey style as this build has, it is made undeniably more interesting by the incorporation of modern elements and components like levers, the air filter, the exhaust, and engine covers – all RSD parts. Also wearing the RSD logo are the antique looking grips. All kinds of one-off brackets and other knickknacks had to be fabricated to get everything to fit. RSD also opted to use metal brake reservoirs; this obviously isn’t a big deal but it absolutely kills me when top shelf builds fail to swap out the cheap plasticky stock units. 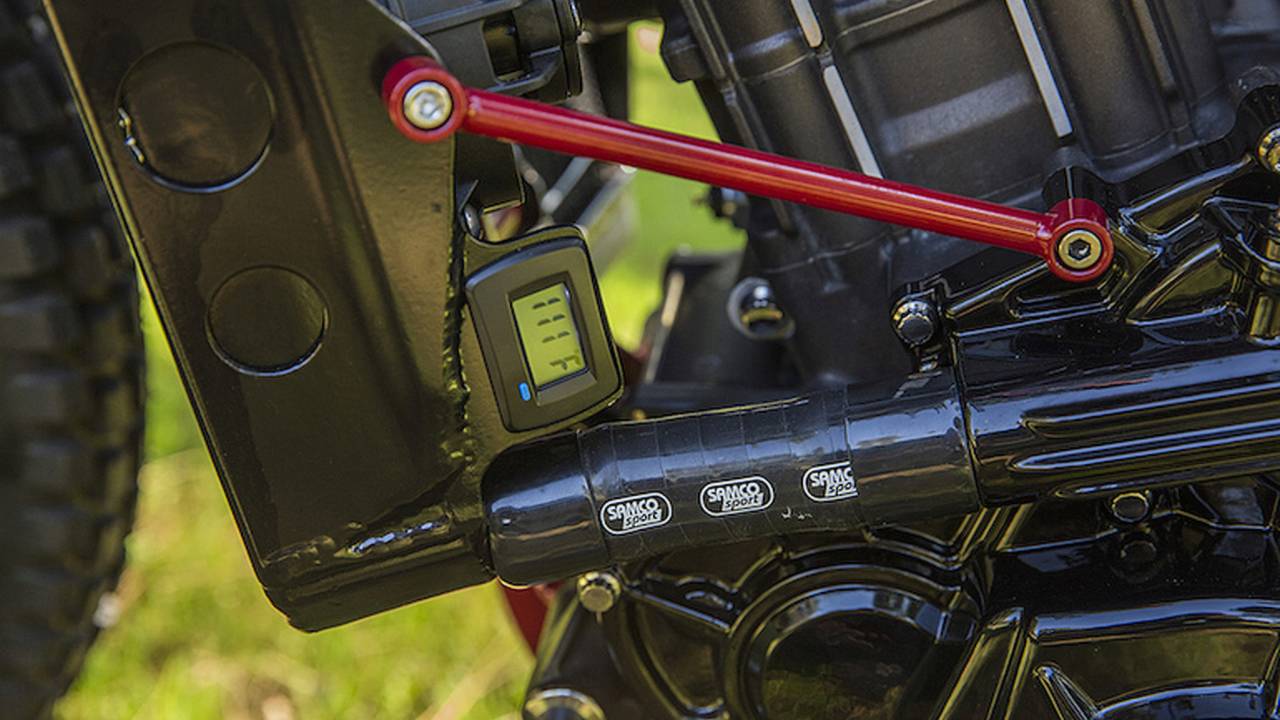 The 2016 RSD X Indian Scout does a lot of things incredibly well. It shows off the potential and versatility of the Indian Scout as a platform for customs, it pays homage to some of Indian’s most iconic machines in the manufacturer’s first century of existence, it boasts incredible fit and finish while demonstrating a meticulous attention to detail for every little part, and lastly and maybe most importantly, it looks so damn good but is also a bike I genuinely want to ride and not just ogle over. Looking at a machine like this makes it pretty clear that Roland Sands’ empire wasn’t forged out of sheer luck and that he’s earned every ounce of weight attached to his name.

One of today's favorite aesthetics is the blending of modern style elements with vintage 1970s and '80s visual themes. It just works, and borrowing visual components that have proven themselves to be timeless is a decent way of ensuring the resulting design will stand the test of time itself. This same logic very much applies to even earlier style elements, the seat that defines the bobber and has become so popular undoubtedly came from these 1920s to 1950s American machines RSD put its own twist on. 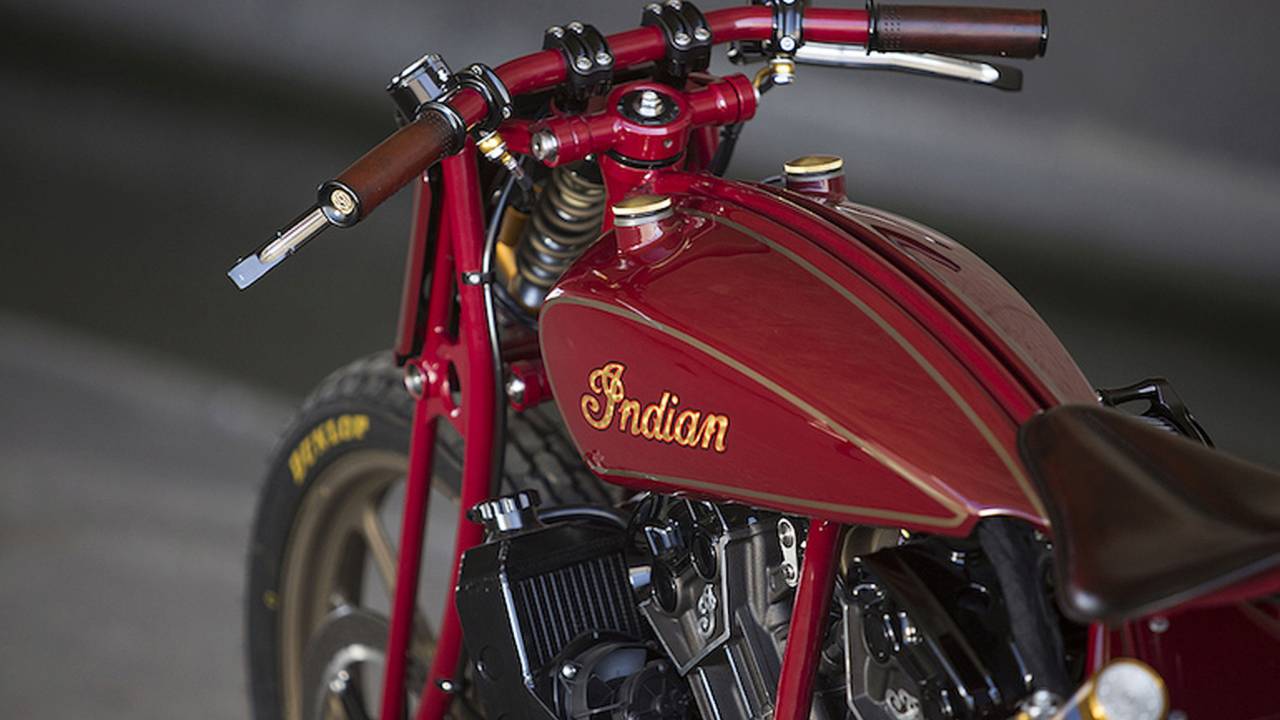 I personally can’t wait to see RSD and Steve Cab’s Scout Bobber custom next month at the Brooklyn Invitational. If it’s anywhere near as epic as this fine build, I’d say we’re in for quite a treat. If you’ve recently built something cool or if you know of a bike on the interwebs that you feel deserves to be featured as RideApart’s Bike of the Week, drop us a line at info@rideapart.com 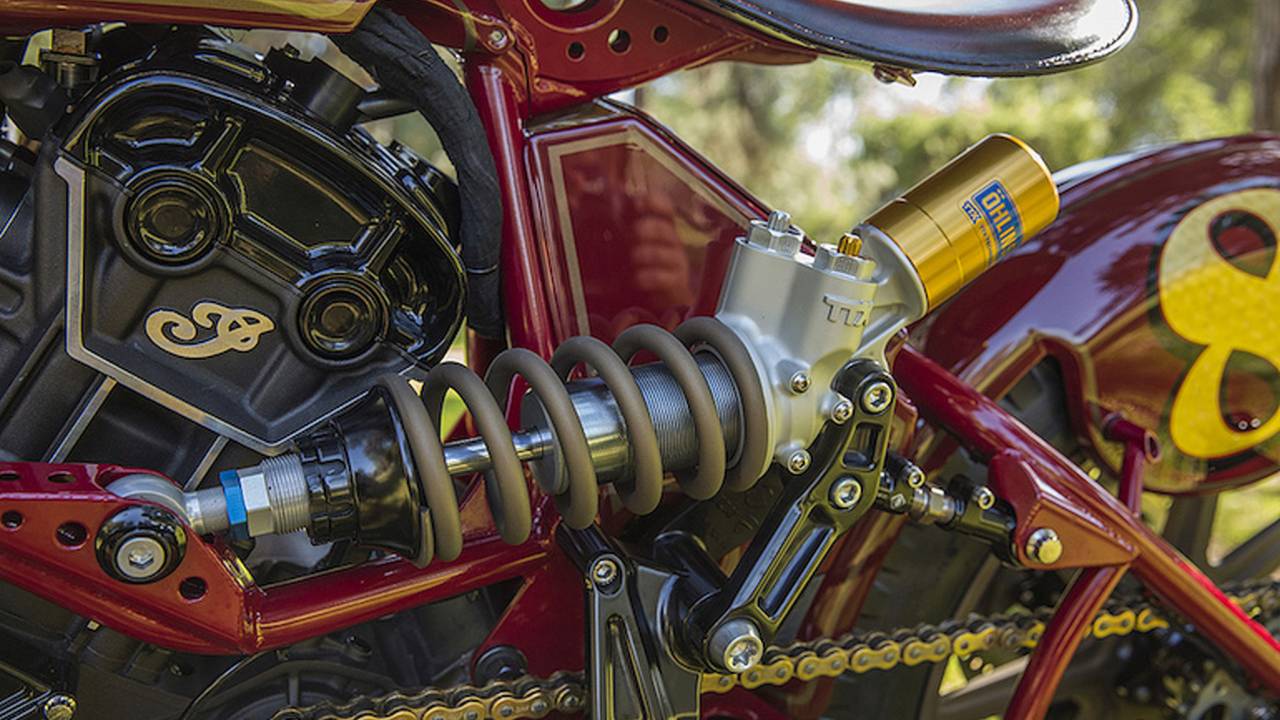