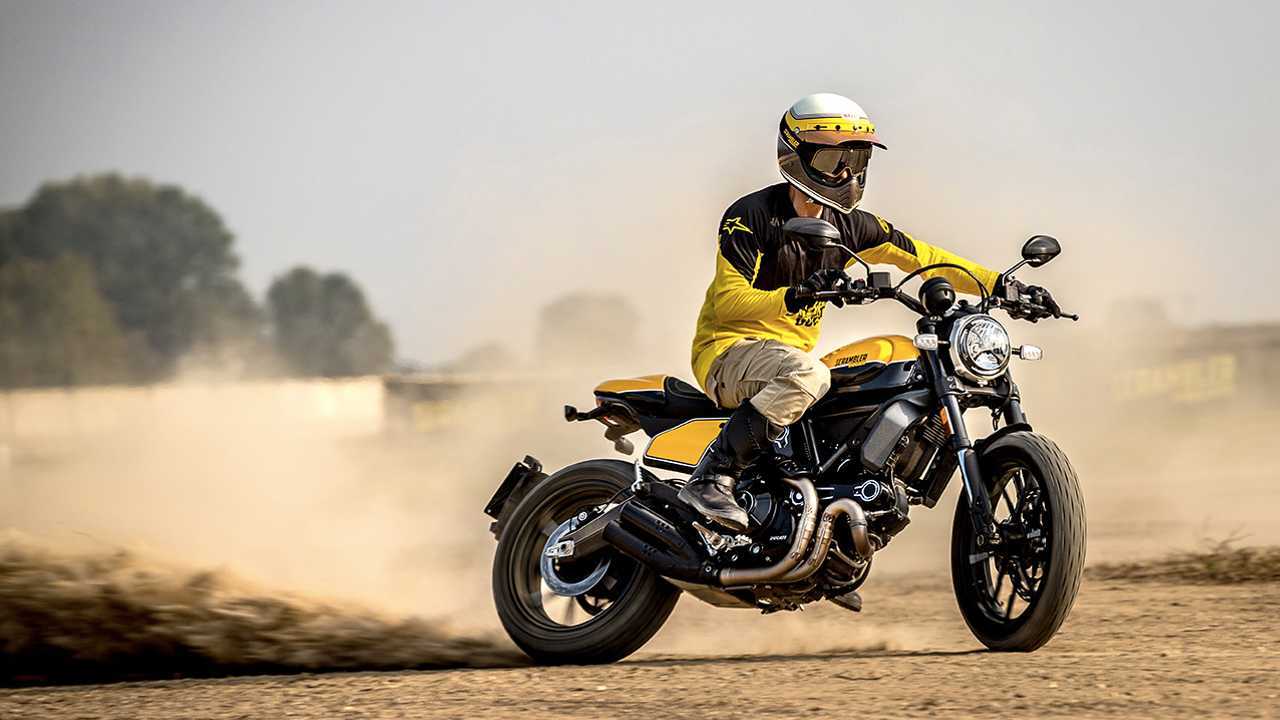 Let's get ready to scramble!

Scramblers were the original dirt bikes. They were initially road bikes modified to fulfill some form of off-road purpose thanks to the addition of taller suspensions, knobby tires, a skid plate, and a high-mount exhaust. The goal was to end up with a more versatile bike that could tackle both the streets and the trails.

50-plus years later and scramblers have evolved from DIY, yard-builds into factory affairs. Though some of those “modern” scramblers look and feel pretty legit, can they be considered the “real deal”? Some purists argue that they aren’t—frankly, custom builds are possibly closer to being the real thing.

Whether they’re real scramblers or not, some manufacturers have given us some solid options to consider for those who’d rather get a ready-to-go scrambler than a project bike with the potential to become one. Here are five of those maybe-not-real-but-really-cool factory-prepared scramblers.  What's your favorite modern-day or original scrambler?

You can’t make a list of scramblers without including the bike whose model name is Scrambler, no matter how legit or not they are. There are two of those on the market at the moment, starting with Ducati's take on the historical segment and the appropriately named Scrambler.

The model was introduced in 2014 in two mid-range versions—400 and 800cc—followed in 2018 by a 1,000cc trim level. While the model doesn't have the same old-school quality as other models on this list, the Italian Scrambler proved on several occasions that it has some serious off-roading chops by participating in desert raids and rallies, including the Mint 400.

Since the model’s inception, Ducati has introduced several versions of the Scrambler to play on its versatility—including such versions as Desert Sled and Full Throttle. That being said, unless it’s a question of design preference, you don’t really need to pay the premium for a factory modified model to get your fix. The base model alone will take you a long way down the paths less traveled.

Though it cautiously stepped on the scrambler scene in the mid 2000s with the introduction of the Street Scrambler, famous British bike maker Triumph went all in in 2019 when it launched the Scrambler 1200.

While the Street Scrambler is the off-road-friendly version of the Bonneville T100, the Scrambler 1200 launched as the Bonneville T120’s trail-ready alter ego, armed with a taller suspension, high-set dual exhaust, skid plate, and larger fuel tank—all the good stuff you want in an off-road capable bike. The model shed 45 pounds and the 1200cc parallel-twin gained a healthy nine horsepower and four lb-ft of torque in the scramblerizing process.

With its pair of lateral rear shocks and flat saddle, the Scrambler 1200 is possibly one of the best-looking scramblers currently offered on the market.

Though it looks nothing like what you picture a scrambler to look like, the Husqvarna 401 Svartpilen still has the chops to be considered at least an honorary member of the segment. Design-wise, the Husqvarna “Pilens” (Svart and Vit) look like nothing we’ve seen before with quirky, almost futuristic silhouettes.

With its tall stance, knobby tires, and sump plate, however, the 401 Svart gives us a little taste of scrambler wrapped up in a delightfully Swedish design. Armed with a 373cc single, six-inches of suspension travel, and weighing in at a minuscule 335 pounds, you might not think the Svartpilen a scrambler but we think you should. An unusual scrambler, but a capable one nonetheless. It’s a Husky, after all.

If you doubt the Van Van should be featured on this list, you’re wrong. It’s probably the model out of all six that deserves a spot the most. The RV125 was initially introduced in the early 70s as Suzuki’s version of the Honda CT. With its tall simple architecture, high-set exhaust, and thick rear tire, the little tracker was designed to be an accessible, versatile, go-anywhere options.

The model remained on the market for roughly a decade before it was discontinued in 1982. Suzuki revived the badge in 2003 and added Van Van to the nomenclature. The model initially returned as a 125 (like its ancestor) before evolving into a 200 a little over a decade later. The resulting Van Van 200 is a criminally fun and unsuspectedly capable little bike that doesn’t care much about how far off the road you need to go, just as long as you take it with you.

If you’re not overwhelmed by the number of available versions of the R nineT BMW has come up with, then you can certainly appreciate how good the bike looks. The model is part of what BMW calls its “Heritage” lineup, alongside the recently introduced R 18.

The entry-level R nineT was first introduced six years ago, before the House of Munich went a little berserk on the factory modifications. One of the resulting BMW-built "customs”, the R nineT Scrambler, was introduced in 2016.

The R nineT's foundation has a lot of potential but BMW doesn't push the "off-road" aspect as much as its competitors. That being said, throw in a pair of knobbies, a sump plate, and possibly even crash bars to protect those beautiful flat-twin cylinders’ heads and you'll have yourself a pretty credible scrambler. That exposed belly makes us a little nervous.

With its silvery-blue colorway paired with an elegant tan tuck-and-roll saddle and the purr of that 1,170cc boxer engine, off-road or not, this is one Scrambler that knows how to turn heads.