Everything New In Ducati’s 2021 Motorcycle Lineup 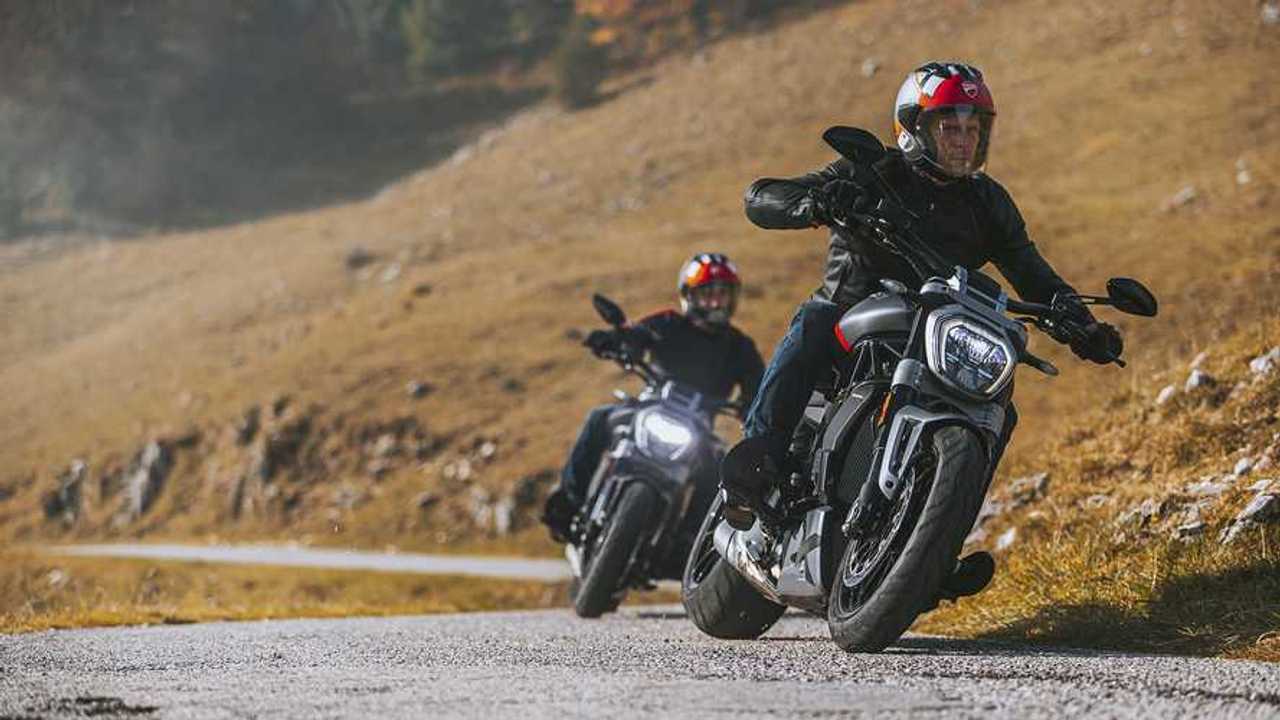 Things were weird and different in 2020. For bike makers, the year’s turmoil meant rethinking their product launch strategy since all the usual channels of introduction were cut off. No EICMA, no Intermot, no Tokyo to showcase their newest bikes.

For Ducati, the new strategy involved transforming its hour-long Word Premiere event into a five-part web series. Every week between November and early December, we were introduced to new bikes, whether they were new models altogether, or special editions of some sort. Despite a, let’s say “complicated” year, Ducati managed to keep things interesting with several additions to its 2021 lineup. Here’s a look at what the Italians have in store for us.

On the “modest update” end of the spectrum, we have the Ducati Diavel Lamborghini—which is pretty much the exiting Diavel outfitted with special livery and badging.
This special-edition Diavel was designed to celebrate the introduction of Lamborghini’s first hybrid supercar, the Siàn FKP 37.

For the occasion, the Italian cruiser received a special, matte olive green livery with golden accents, gorgeous dual-star spoke wheels, and premium brake and suspension hardware. If the idea of a special-edition Diavel seduces you, you’ll want to act quickly as only 630 Diavel Lamborghini will be produced.

The Ducati Monster was the last bike in the Italian familia to get its Euro 5 upgrade. We knew the new Monster was coming thanks to spy shots of the roadster leaked earlier in the year, we just didn’t know when. That “when” was December 2, 2020.

The famous Duc was introduced with a much slimmer silhouette, a new engine borrowed from the Supersport and Hypersport, and a brand-new design that confirmed our suspicions that the new-gen Monster was losing its signature trellis frame. The news left some of the model’s fans heartbroken because of the Monster’s resulting, more “generic” silhouette.

That being said, Ducati fully took advantage of the overhaul, cutting a staggering 40 pounds of body weight, and wringing 111 hp from the new 937cc L-twin—two more than the outgoing 821cc mill. The Monster now shares

This is the most highly anticipated new motorcycle in Ducati’s lineup for 2021. The Italian firm confirmed back in October, 2019, that a V4 version of its famous sport-tourer was coming which gave us plenty of time to speculate about what the new Multi would be like.

In November, 2020, we finally got to meet the new member of the Multi family. Not only is the bike designed to be more capable than ever, it also received its own dedicated V4 engine, dubbed the Granturismo. Derived from the engine used in the Panigale and Streetfighter, the V4 Granturismo has a bigger displacement at 1,158cc (versus 998 or 1,103), produces 170 horsepower (versus 214 hp), is lighter than its 1260 predecessor, and is tuned to provide more low-end grunt. The new engine also boasts the longest valve maintenance interval at 37,280 miles.

It sounds like Ducati did some good work as the new Multi even landed a spot on our favorite reviews of the year.

The Ducati Panigale V4 became the first bike in the family to receive Ducati’s 1,103cc Desmosedici Stradale 90-degree V4 engine. The Panigale V4 R followed up in 2019. Ducati added yet another Pani to its lineup for 2021 and this time, we’re going carbon crazy.

The new Panigale V4 SP is your standard Panigale, fitted with a slew of carbon fiber components including the wheels, while also shedding the weight of all the stuff that makes it road legal. The result is a 427-pound track weapon designed to be easier to toss in the bends than the Panigale V4 R.

Though the name Panigale is Ducati’s most popular sportbike namesake, not everyone wants a bike that makes 200+ horsepower. Some riders out there who still want to enjoy the Ducati experience prefer to sit on something that’s milder mannered. That’s where the Supersport comes in.

For 2021, the Supersport 950 received a little Panigale makeover—adopting similar lines to the sport flagship. Under the updated fairing, the 950 runs on the same 937cc Testastretta, now Euro 5-compliant and rated at 110 horsepower and 69 lb-ft of torque.

The 2021 model-year is equipped with a Bosch 6-axis inertial measurement unit that detects the motorcycle’s position on the road and controls such systems as cornering ABS, traction control, and wheelie control.

Another year, another version of the Ducati Scrambler. The company sure loves its Scrambler platform as, since its inception in 2014, it introduced a slew of variants, many of which remain available to this day.

2021 will see the addition of yet another version of the Scrambler: the Nightshift. The underpinnings are the exact same as the other Scrambler 800, with the addition of a silver-blue matt colorway with blacked-out features, a straight handlebar with bar-end mirrors, a flat, two-person saddle with tuck and roll pattern, wire-spoke wheels, and number plates on the sides.

The XDiavel was also on the list of bikes that had yet to receive its Euro 5 treatment. On November 11, 2020, Ducati remediated the situation with the introduction of its updated power cruiser family.

In the case of the XDiavel, the emissions update came with a power increase with the compliant 1,262cc engine now producing 160 horsepower and 93.7 lb-ft of torque—an eight hp increase over last year’s model.

The 2021 model-year is available in three versions: S, Dark, and Black Star. Ducati claims that the Black Star is the XDiavel’s sportiest trim level—at least in terms of looks—thanks to a special matte black and grey colorway with red accents, cast alloy wheels, and a dual-ended exhaust tip.