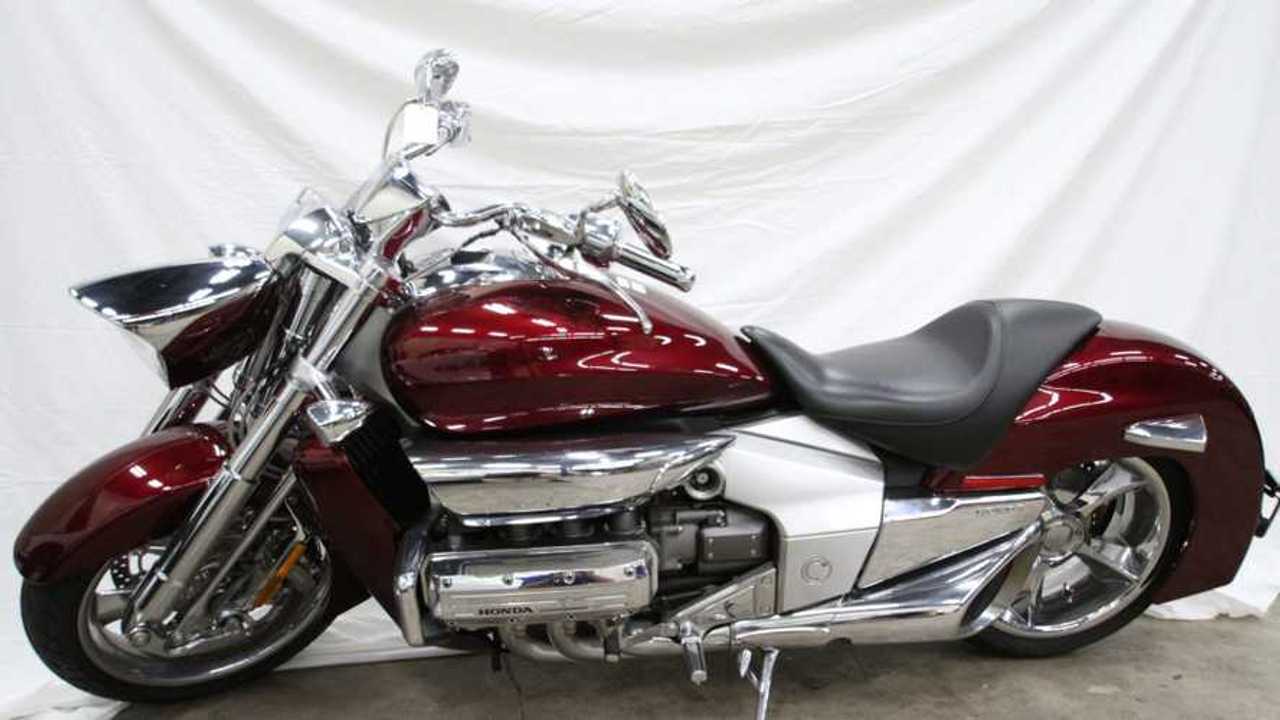 This weird factory custom spent years in a warehouse, unridden.

When the super-weird Honda Rune came out in 2004, did you really, really want one? Honda’s oddball Gold Wing variant went out of production years ago, but if you want an as-new Rune, now’s your chance! Bring a Trailer has a 2005 model listed, with only 54 miles on the odometer.

Why would you want a Rune? Because it’s different, and because it’s a Honda. For decades, Honda sold motorcycles on promises of practicality, reliability, performance, and general positivity. You met the nicest people on a Honda, the adverts promised. Even with its cruiser line, Honda didn’t use cliched, play-pretend bad boy skull-and-crossbones motifs to sell its machines. When the Rune came out, with axe-wielding barbarians featured prominently in the magazine advertising, it was a whole new angle for Honda.

It was a sign of the times, though. In the early 2000s, everyone wanted a chopperesque motorcycle, and Honda jumped aboard that bandwagon with the Rune (which isn’t exactly a chopper, but at least Honda tried). It wasn’t exactly an official factory custom (whatever that means) along the lines of Harley-Davidson's CVO series, but the Rune was produced in very limited numbers. It was rare, it was distinctive, and it was expensive—all good things, before the 2008 financial collapse.

Underneath all that Judge Dredd bodywork, the Rune was built around the Gold Wing platform, with Honda’s sensible, liquid-cooled, 1832cc flat-six engine. Thanks to some changes to the top end (hotter cams and ignition), the Rune made about 90 horsepower at the rear wheel. Today’s big-bore cruisers make a little more power than that, but not much more. In the early 2000s, the Rune would have been on par with any other factory custom cruiser, unless the owners were throwing mad tuning money at their bikes.

The Gold Wing is usually seen as a sensible motorcycle, but Honda was clever to use it for the Rune. Although American cruiser fans often like to put down Japanese bikes, the Wing is one machine they’ve usually had respect for (along with the Yamaha V-Max). Plus, nobody else was building a flat-six factory special like this. Honda definitely had something different.

This particular machine on Bring a Trailer has super-low mileage. According to the ad, it was assembled by a dealer, and then placed into storage for some reason. It’s a no-reserve auction, but the price won’t be cheap. Currently, it’s at $15,000 USD, and likely to continue climbing. That’s a lot of dough, but basically-unused Runes aren’t exactly easy to come by.