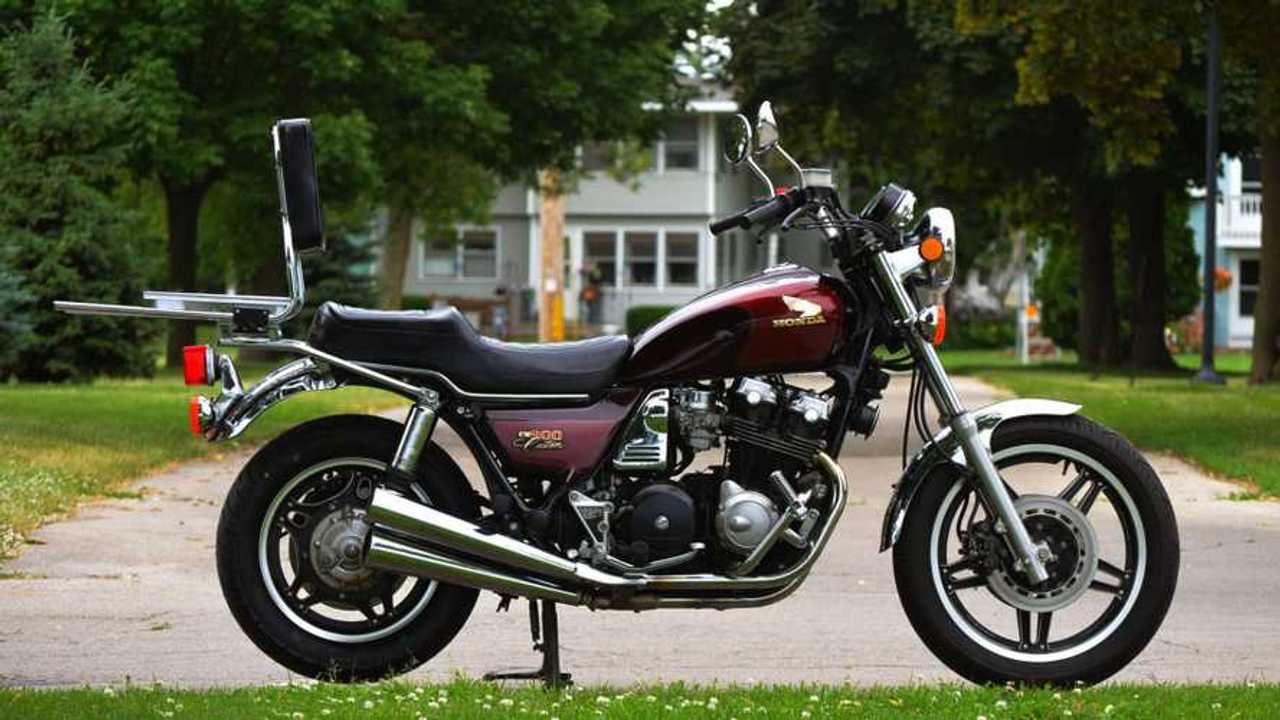 These days, most motorcycles come with a six-speed gearbox. A few older models or lower-priced machines still run a five-speed, but six cogs is de rigeur now. A 10-speed, though? That sounds crazy, but that’s what this 1982 Honda CB900C Custom has—a dual-range, five-gear transmission that effectively offers 10 speeds.

Who needs a 10-speed motorcycle? Probably nobody, but in the 1980s, the lines between luxury cruiser and sport touring were a little more blurred. Along with lots of chrome trim and a comfort-oriented chassis, Big Red also decided to include some technical flash to its shiny new big-bore touring cruiser. Hence the 10-speed, which used a sub-transmission to double the range of the CB900’s gearbox (in other models, this air-cooled, DOHC, 901cc inline four had a five-speed transmission).

The idea was, you’d use the lower five gears for around-town riding, and use the top five gears as a sort of overdrive, to lower rpm while highway touring. Honda had a laudable end goal, but unfortunately, the sub-transmission sapped power and added both weight and needless complexity. These days, manufacturers use a six-speed gearbox to accomplish the same goal, which is a much simpler arrangement. Still, this setup was revolutionary when it debuted in 1980. Remember, Harley-Davidson was running four-speed gearboxes on some of its cruisers well into the 1980s.

The rest of the CB900C Custom was a parts bin special—no point in being all spendy if you don’t have to. Honda put on a shaft drive (pinched from a CBX model) to reduce maintenance (this was also part of the dual-range transmission arrangement). The air suspension originally came from a Gold Wing. Overall, it was a luxurious, weird, and powerful motorcycle that combined technology and muscle in a package you don’t see on modern touring cruisers.

This ‘82 model, for sale on Bring a Trailer, is in excellent overall shape, and only has 3,000 miles on the odometer. The ad notes some minor imperfections, but nothing too concerning. It even comes with a backrest/luggage rack, engine crash bars, and highway pegs, probably the most common factory add-ons of the early 1980s for the practical-minded rider. These days, they look corny, but they do contribute to the machine’s period-correct look.

5 Things You Should Know About The 2022 Kawasaki KLR650
Just Where Did The Bike Wave Come From, Anyway?
French Company Developed Roads That Melt Their Own Ice In Winter
Pandemic Heroes: This Honda Dealer Turned Into A Vaccine Center
Thor MX Introduces Its Spring 2021 Gear Line
Commenting Guidelines
Sign In or Sign Up
© 2021 Motorsport Network.
++