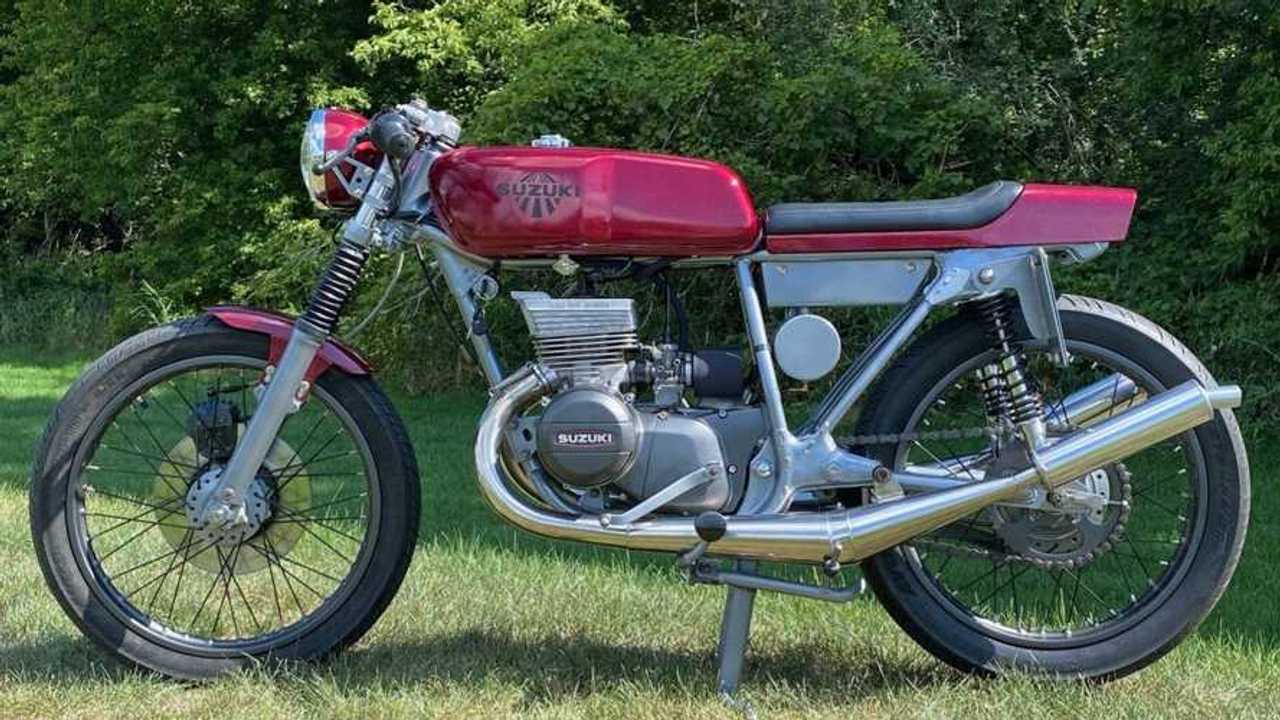 Suzuki’s GT185 Adventurer was the most standard of standard bikes. The house of Hamamatsu primarily produced the little “Grand Touring” model as a commuter bike with an easy-going 7:1 compression ratio and 21 peak horsepower. When self-taught garage builder Steve Baugrud received a 1974 GT185 Adventurer as a free donor bike, he decided that he’d turn the pedestrian standard into a stunning café racer.

Baugrud acquired the bike in a state of disrepair in 2018. Over two years, the garage builder completely overhauled the Adventurer starting with the air-cooled 185cc engine. Baugrud vapor-honed the cases and cylinders, installed new pistons in the parallel-twin and rebuilt the oil injection pump. New ignition coils, wires, and spark plugs helped the renewed engine turn over and re-built and re-jetted Mikuni carbs kept the little motor humming. However, a Higgspeed stainless exhaust system is the pièce de résistance with the perfect two-stroke exhaust note.

Next, Baugrud de-tabbed the frame and replaced the GT185’s bodywork with a custom tail section, Honda replica gas tank, and a shortened front fender. With the bones cleaned up, Milwaukee’s WisCoat Refinishing powder coated the chassis in silver and bathed the bodywork in a beautiful metal-flake burgundy. To complete the tail end, Baugrud added an LED brake light and a custom solo seat upholstered in black vinyl with silver stitching.

Of course, a bike can’t roll without wheels and they received just as much attention as the rest of the project. Baugrud assembled a wheelset with black powder-coated hubs, spokes, and rims and spooned on a set of Avon AV83 tires. He also added a master cylinder to the front hydraulic brake, re-built the caliper, and installed braided lines. The front forks were also overhauled and the rear shocks were replaced with newer units.

According to Baugrud the GT185 café racer is “lightweight and peppy.” If you’re a collector or someone looking for a two-stroke that’s easy to wrangle, Baugrud’s build is currently up for auction on Bring A Trailer. Even if it’s only an A-to-B bike, there’s no reason it has to be a standard.