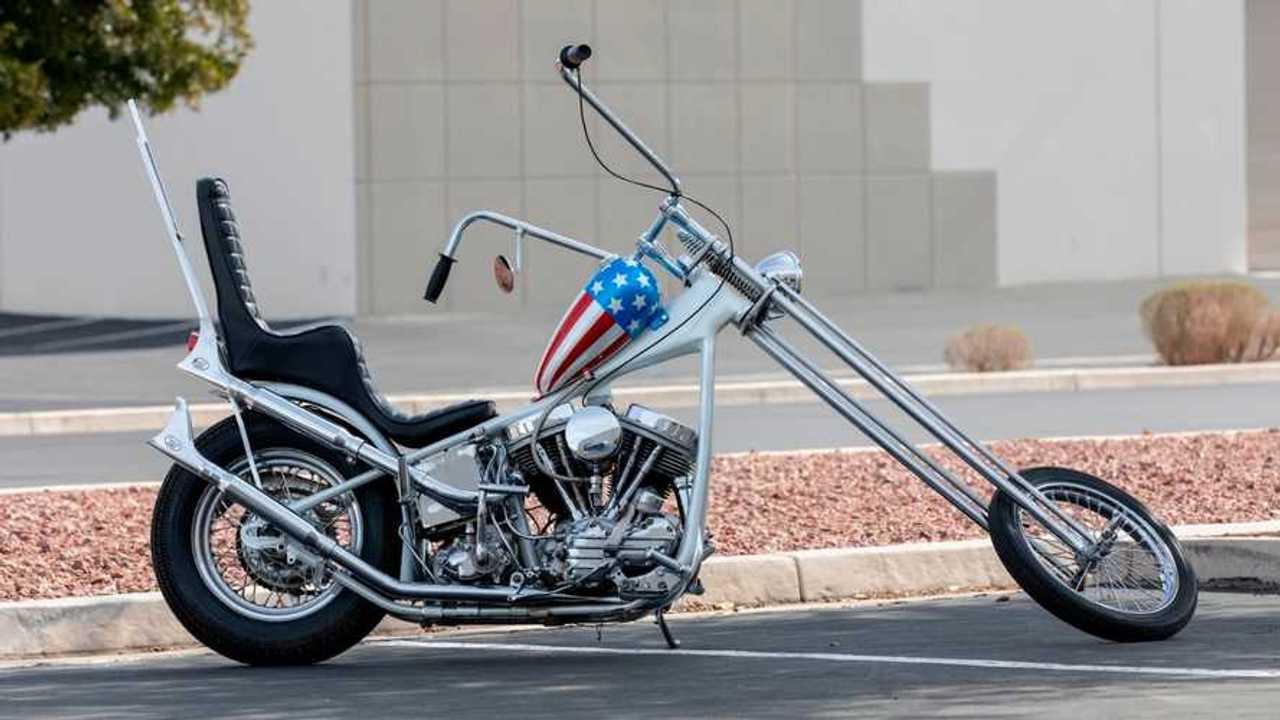 In 1969, an independent film captivated audiences with a story of two outlaw bikers on a road trip across America. Produced by Peter Fonda and directed by Dennis Hopper, Easy Rider helped shape the public perception of motorcyclists, for better or worse. With loud engines and equally loud paint jobs, the two Harley-Davidson Panheads featured in the film became symbols of American freedom—even if that was antithetical to Fonda and Hopper’s message. More than 50 years later, the film is still captivating the public as a replica of the “Captain America” bike ridden by Fonda’s character goes to auction in March.

Built for display in Dan Akroyd’s Hard Rock Cafe in San Francisco, this California-style chopper features all the hallmarks of the era. From the gleaming chrome to the raked front end to the fishtail exhaust pipes, the replica is drenched in the late-’60s/early-’70s chopper aesthetic. Following the bike’s stint in San Francisco, E.J. Cole purchased the old Panhead and displayed it in his Sturgis store window from 1990-2015.

Capturing the essence of the Captain America bike, this 1963 Panhead features a 74 cubic-inch (1,200 cc) v-twin engine mated to a 5-speed transmission. The fuel tank’s iconic American flag paint job and the chrome finishes also match the styling of the original. A hardtail frame with and a set of ape hanger handlebars complete the silhouette of the Easy Rider chopper.

However, the reproduction departs from the original in some key ways. Unlike Fonda’s motorcycle, the builders outfitted the replica with a springer fork whereas the Captain America bike sports a telescopic front end. Additionally, the rider has to change gears via suicide shifter, eliminating the left-hand controls on the handlebars, but Fonda used a hand clutch in the movie. The filmed bike also had the frame and rear fender finished in chrome and this version has them painted white.

The reproduction’s ergonomics also stray from the original with a set of larger, high-rise handlebars and replacing the cobra seat with a king & queen seat. Finally, the sissy bar on the film production model contained a wizard hat top and the replica leaves the top of its sissy bar disconnected.

Despite the differences, the idea behind the Captain America bike means more than the accuracy of each component and the reproduction still captures the nostalgia of the era. The Harley-Davidson Captain America replica will hit Mecum’s auction block at the Glendale 2020 event on Thursday, March 12. If you’re looking for a display bike or a new garage queen, get your motor running and head out to Glendale, California.