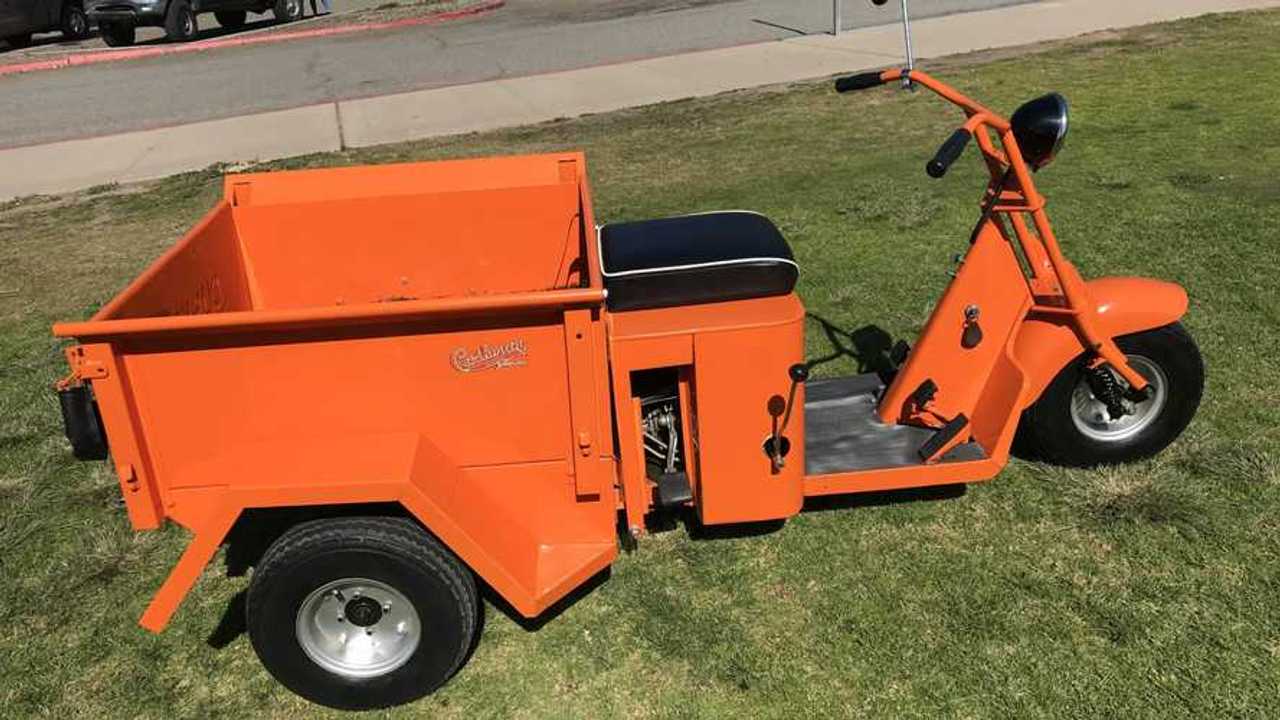 It's a long way down the holiday road.

Ah, the good old-fashioned family road trip! With this 1954 Cushman (Family) Truckster, you probably won’t be taking one any time soon, because it’s unfortunately not built for that. However, if you have a home or business setup where you need to haul a small pickup bed’s worth of things somewhere not too far away, this might be the three-wheeled vehicle for you.

Are Three Better Than Two? :

This particular Truckster is painted bright, safety-cone orange, so you’ll definitely be able to spot it in the parking lot of your nearest garden center when you come out to load it up with mulch. It’s powered by a Husqvarna single-cylinder engine and has a three-speed transmission with reverse. It’s located in San Diego, California, and has a clean California title. It’s also lived with its current owner for the past 18 years—and even comes with the manual!

No worries if what you’re planning to haul would fare better with a bit of padding underneath it. After all, some stuff could ding up that orange paint, and no one wants that. Luckily for the winner of this auction, the seller is including a nice, carpeted pad that fits this Truckster’s bed dimensions, so you can rest—and haul—easy.

The spark plug and starter pedal pad were replaced sometime in the last 18 years of the seller’s ownership, according to the listing. However, although all three tires hold air, they’re cracked and probably should be replaced soon if you take this Truckster home with you.

Among all the photos provided by the seller, there’s a shot that’s just the starting procedure for this particular vehicle—and it’s 18 steps long. Whether you see that as a charming relic of the times, a set of maintenance challenges you’ll want to tackle, or just too much entirely is up to you.

When new, this model output a claimed 8 horsepower. Amazingly, some later models of Cushman Turf-Truckster upped the power and hauling capacity so much, It Still Runs claims they could haul a total of 2,850 pounds! It’s unclear exactly what the hauling capacity on this 1954 model is, but it’s probably safe to say that it’s a bit less than those lofty heights.

If this little guy calls to you, the current bid on Bring A Trailer is just $500, plus whatever shipping might cost. The auction ends on February 26, 2020.