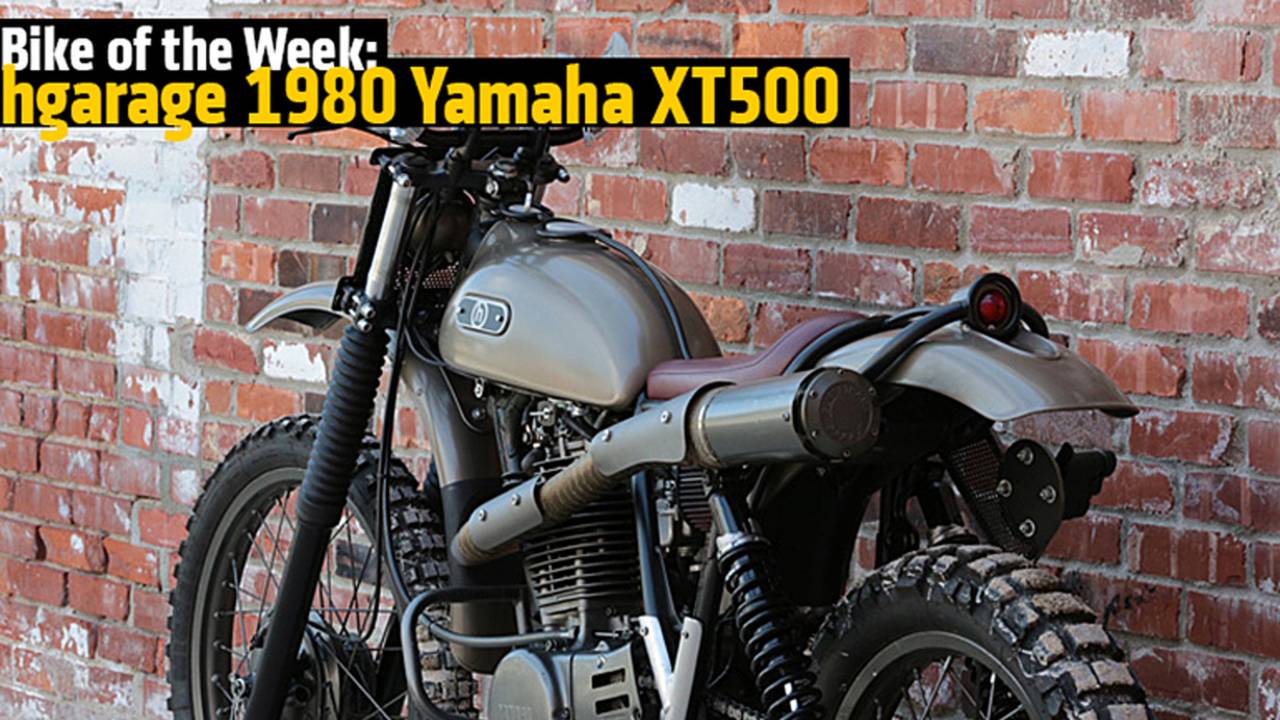 "Working myself out of a job in 2010 turned out to be more of a blessing than a curse," said Scott Halbleib owner and operator of hgarage in Louisville, Kentucky and the organizer of the Kentucky Kickdown. "Finally, I could spend more time building motorcycles without the stress of a regular nine to five."

He still kept a couple night time side jobs to keep food on the table, but Scott opened a shop and started building killer custom bikes a couple years ago.

READ MORE: Past Bikes Of The Week

Scott said with every project he focuses on two main goals, "always try to work on something different and try and do something that I've not seen before, which is getting increasingly more difficult." His previously built bikes included a bike he calls the big Brick, a CB450, and a heavy XS. It was his friends at Modern Metals that put him onto the idea of a Yamaha XT500, after letting Scott ride one of their own.

Scott found this bike on the Internet only a couple hours away. It was a nice running bike with worn paint. "Like clockwork, some of the Louisville Vintage Motorworks fellas started giving me grief about tearing apart another nice bike. After a couple rides to the local bike night, it was placed on the lift and disassembled."

Scott wasn't exactly sure to do with the bike when he first started ripping into it. "I knew I wanted something that looked older. I took cues from Honda Elsinores, vintage Huskys and Greeves bikes which I dig."

Immediately, the plastics were tossed along with the tank. Then started sketching out ideas with foam and cardboard. His first idea was scrapped as it would limit the dirt bike stance and suspension travel.

It took Scott nearly a month staring at the bike before he finalized his design. Starting with a Yamaha CT175 gas tank, he built what he refers to as the backbone, the 3/8-inch rod that runs over the tank and rear fender. "One of my goals was to do something I had not seen before, so I ran with it."

The backbone became a fabrication challenge, where he enlisted the help of friend Jeff Massey at Kool Air who finished  the backbone, fabrication work on the tank and housed the electronics.

The rear fender was something Scott had laying around and not exactly sure where it came from.

The seat was one of the more difficult pieces of the puzzle. The backbone rod had to be incorporated to fit into the design, but not fit into you when you sit down on the bike. Scott spent four hours working race foam into a useable shape before shipping it off to New Church Moto in PDX for upholstery.

The SuperTrapp pipe was already one the bike when he bought it, but it needed to be mounted higher for off-road riding and the look. Alex at Bluegrass Muffler fabbed up new header pipes and mounted it.

In case the bike gets thirsty on a long trail, Scott installed a Rotopax tank and a tank mount modeled after the headlight mount, "something I'd seen on one of the Icon bikes at The One Show in 2013. I also made a second mount which carries a waterproof Kriega pack bag. So depending on whether you're running around town or heading out on a longer ride, pull two bolts and you're set."

Scott cut up a ATV crash bar he was given from a friend's closed down bike shop, to make it fit the skinny bike and then removed the steering lock to get the proper look for the headlight, lengthened the kickstand, added 16.5-inch shocks for the back to get maximum travel, rebuilt the forks and tapered the bearings.

"The paint was decided early on, graphite on the wheels and motor, semi-gloss black frame, dark silver tins and black seat. The exhaust wrap came, and it had a bronze tint to it which I liked enough to rethink my color options. I had been set on the monochromatic look but reconsidered before heading to the paint store. I chose a color to match the bronze then started contemplating a new seat color as it was en route," said Scott about the final color design.

"I'm never a 100% satisfied but I'm close," said Scott about all of his motorcycle builds. "I was able to finish it in time to make it to the Rockerbox Motofest in WI where it won Best in Show." He says he'll keep building bikes while he can fund it. "Good news…while I was contemplating, ordering and waiting on others, I started working on a Honda FT500. I think it is going to come out pretty cool, and hopefully I will get it out without too long of a hiatus. Oh yeah, and there's a ‘78 Goldwing on the other lift. Burly bagger, maybe?"