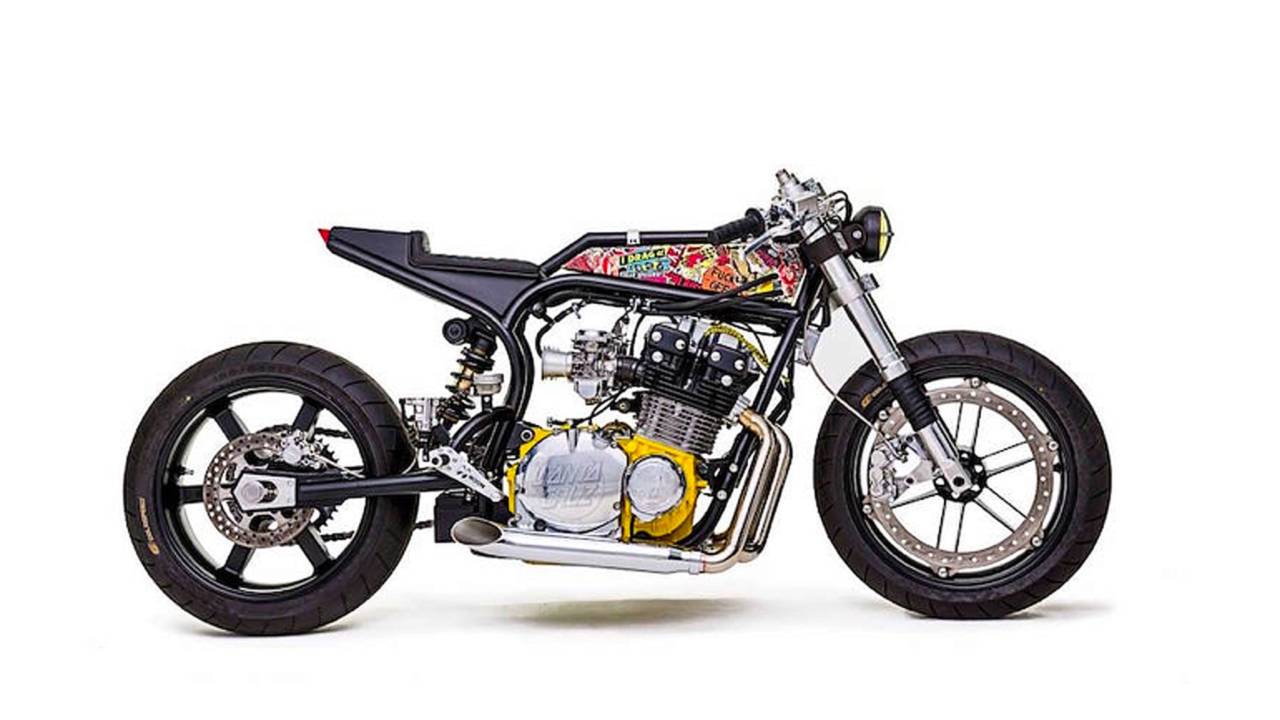 A powerful 1980’s engine, a bespoke frame, and a tip of the cap to old-school skateboarding culture.

EdTurner Motorcycles, a shop from France, has a solid reputation for delivering outside-the-box customs. The shop’s founder Karl Renoult has a bit of a thing for wacky designs, so when a client with similar sensibilities commissioned a Suzuki build, it allowed Renoult to create something special out of a 1980 Suzuki GSX1100, which just happens to be this week’s Bike of the Week.

Starting with the chassis, Renoult originally planned on simply modifying the Suzuki’s stock frame loop, but plans changed and eventually it was decided a bespoke frame was in order. The one-off chassis was just barely big enough to fit the 100 horsepower, sixteen-valve, four-cylinder engine, and a custom fiberglass tank was made in house that suspends the six liter fuel-cell.

A front/side view of EdTurner's GSX1100

The same diameter tubing was used to create the tail-sections structural skeleton, sweeping around, leaving the hefty Japanese power plant on full display. A one-off tail section was also fabbed up before being dropped into the custom sub-frame, which was then finished off with a hand-tooled leather seat from “Fabrice at ASD” as Renoult put it.

A profile shot of EdTurner's GSX1100

The build’s inverted front-end was borrowed off of an unspecified Buell, which was mounted via custom triples capped off with US Flag cutout triple top clamp. In back a Hyperpro shock was added which Renoult paired with a one-off swing arm. The custom Suzuki also sports the same Buell donor’s 17 inch rims which were fitted with Maxxis Goldspeed tires.

According to EdTurner a myriad of one-off parts were created in order to pull off the custom’s conversion from belt to chain drive. Next a custom four-into-two exhaust system was created and fixed in place, as was a quad-velocity stack setup. Instead of traditional tubing, Renoult implanted the use of braided nylon lines, adding to the build’s overall flavor.

A headlight was supposedly sourced off of an old Ford Mustang which was tacked on via hand-made leather brackets. According to Renoult, the taillight was “provided by prison administration. These lights are located above each cell door”. A set of Renthal bars were chopped up and turned into the clip-ons the bike now sports, and a custom set of foot controls were crafted, complete with Mooneyes logo cutout.

The bottom of the engine was also sprayed in a Mooneyes-themed yellow, while the top-end is coated in black, and the cases were left in polished bare metal. The client who commissioned the build happens to be a fan of old-school American skate brands—another interest shared by Renoult—which is what would dictate the custom finish and engravings. The engine’s covers now wear various skate company logos such as Santa Cruz (decks) and Etnies (shoes). The narrow fuel-cell was adorned in a collage of old skate stickers from iconic companies like Thrasher and Vans. The stickers were then sealed by a protective, multi-layer clear coat.

Like all EdTurner builds, this one-off 1100 is just a really fun build that’s been well executed and boasts an impressive attention to detail. Machined reservoir caps and and other small knickknacks make a noticeable overall difference. Plus having grown up skateboarding, I particularly like this build, earning it the place as this week’s Bike of the Week.